Local news orgs tell Congress: We need a bailout, too 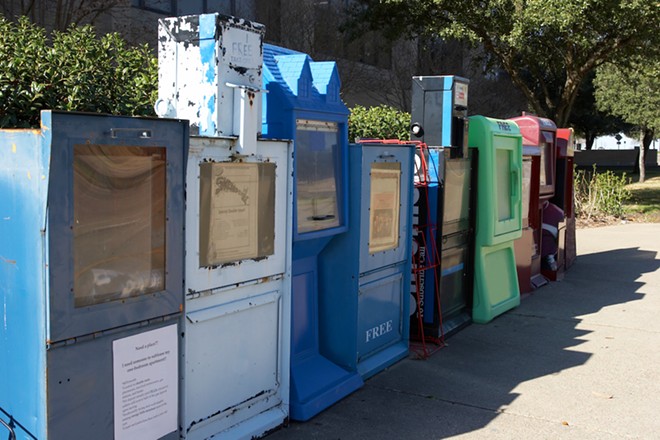 If you’d like a sense of how fraught the local news business is right now, check out the Poynter Institute’s running list of publications that have shut down, laid off or furloughed employees, or implemented massive pay cuts. As of Monday, April 13, 68 papers were on the list – and that’s not counting TV, radio, magazines and digital-only publications. A lot of them are alt-weeklies (like this one) that rely on ad revenue from restaurants and bars that are closed and events that have been canceled.

At Orlando Weekly, the website is still lively and the print issue still rolls out each week, but we have furloughed more than half of our staff. We’re in a precarious position – and the longer this situation drags on, the more precarious it becomes.

This is an unmitigated crisis for local media – and even more so for the communities that rely on them.

In a letter to congressional leaders last week, a coalition of First Amendment, good government, and news organizations – including the Association of Alternative Newsmedia, of which Orlando Weekly is a member – asked the federal government for help: “As you consider further economic stimulus legislation to help the country at this precarious moment, we urge you to include targeted assistance to local journalism, just as you have with other industries deemed essential to our nation’s health, prosperity, and recovery.”

“In an industry that employs more than 80,000 people nationwide,” they continue, “many outlets are now struggling to cover even half of their reporters’ salaries, with newsroom layoffs increasing across the country. These cuts significantly impact communities’ ability to receive critical news and information.”

Local news outlets, they acknowledge, can compete for a potentially forgivable loan through the CARES Act, but “none of those funds were specifically set aside in recognition of the ‘essential service’ provided by local journalism, nor are those funds enough to meet the need. We’re calling on you to specifically include the journalism sector in the congressional assistance packages revitalizing affected industries and sustaining workers across our nation.”

In the next stimulus package – which, at this point, seems inevitable – they ask lawmakers to set aside $5 billion for local media. (For perspective, that’s 1 percent of the corporate bailout slush fund the Treasury Department now controls.) Included in this funding, they say, should be:

• investments to address the “civic-information needs” communities most affected by news deserts;

• more federal spending on public health and other government advertising, with a focus on local and community media;

• and safeguards to ensure this money doesn’t come with editorial strings attached.

Craig Aaron of the advocacy group Free Press – one of the lead organizations on the letter – explained in detail the rationale for these requests on the Columbia Journalism Review site on March 24, when the CARES Act was still taking shape and there was hope that journalism might be included. (It was not.)

“We are long overdue for a major investment in services that provide community information,” Aaron wrote. “To restore what’s been lost and meet growing needs, Congress should take COVID-19 as an opportunity to revive and reimagine journalism’s future.

“A forthcoming recovery or stimulus bill should include another $2 billion to seed a ‘First Amendment Fund’ to support new positions, outlets, and approaches to newsgathering,” he continued. “Such a fund … could offer grants to meet civic information needs, create jobs dedicated to newsgathering and community engagement, and prioritize places and populations that the mainstream outlets have never served well.”

It’s unclear how much appetite there is in Congress to bail out even local media outlets, especially given the president’s antipathy toward journalists. Nor is it clear whether such a stimulus would be anything more than a Band-Aid on a bullet wound.

In reality, the coronavirus has only accelerated a decline that’s been underway for more than a decade. As PEN America trustee Ayad Akhtar wrote in the free-speech organization’s 2019 report “Losing the News: The Decimation of Local Journalism and the Search for Solutions”: “In the face of market failure, adaptation and innovation alone cannot address the crisis at scale. … Local journalism is too important for our policymakers to simply stand by and hope the industry can self-correct. Given the scope and stakes of the problem, we must pursue a major reimagining of the local news space, in which local reporting is re-conceptualized as a public good rather than a commercial product.”

A $5 billion bailout is neither sweeping nor ambitious enough to save local journalism writ large. But it would tide much of the industry over, give it a chance to regroup, and signal that local journalism is, in fact, more than a dispensable commodity, but rather, a public good that deserves protection from market forces.

If you’d like your local members of Congress to support funding for local journalism in a forthcoming stimulus bill, contact:

In the meantime, please continue to support local journalism as best you can. Subscribe to your local newspaper. Support local businesses that advertise with local media. And – in case I haven’t mentioned this already – join the Orlando Weekly Press Club. Find our membership info at orlandoweekly.com/supportlocaljournalism.

When you invest in journalism, you’re investing in your state, your city, your neighborhood. Better journalism, after all, makes a better community.