The lodging industry is taking a beating thanks to the global pandemic, but one of the few positive segments may point to the future of Disney hotels. Economy extended-stay hotels with kitchenettes and other residential-style amenities saw only a 14% drop in March compared to the nearly 49% drop across the industry as a whole. This may explain why Disney is moving forward with their Reflections resort at Walt Disney World, despite the souring global economic outlook.

Many expected Disney to behave as they did after 9/11, when they postponed a large hotel project that was already well underway. The belief was with so much uncertainty regarding coronavirus and the corresponding economic recession, Disney would pause or even cancel projects around the resorts. This seems true for some projects within the parks, but for hotels, the company hasn’t acknowledged any such move.

On the shores of Bay Lake, there have been no indications that the Reflections Disney Lakeside Lodge timeshare resort is being canceled – multiple permits relating to the project have been filed in recent days. Disney Vacation Club rooms often share the same residential-style amenities that are popular at extended-stay hotels, though the construction and residential clientele typical in extended-stay hotels are far from the upper-middle-class families who frequent DVC resorts. The multi-room suites that DVC resorts offer are also more in line with the demands of the always coveted millennial consumers, who now, with both aging parents and kids of their own, are looking for vacation options the entire family can enjoy together. This demand for multigenerational family vacations is likely to grow even more in the post-coronavirus world. One recent study found time with family and friends is the second most missed activity right now, just behind going out to eat. 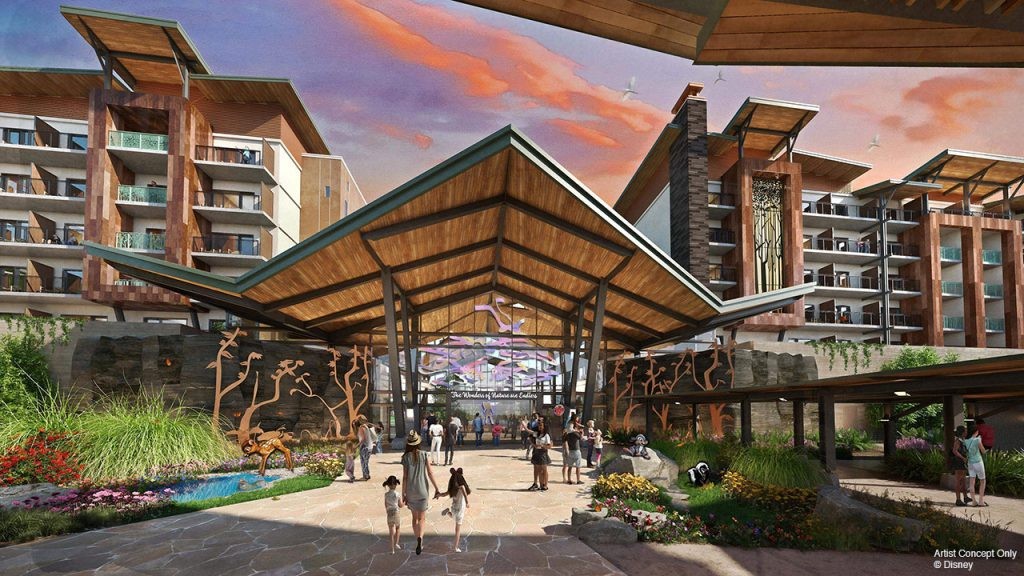 Reflections can provide Disney with a new resort to market as the economy rebounds, while also not straining WDW resources thanks to its central location on Bay Lake. The calming ecological focus of the resort will also likely resonate with many folks who are stuck inside in quarantine right now. A modern lobby is bathed in natural light, thanks to floor to ceiling windows overlooking the lake, and "conversation booths" inside wicker orbs are scattered around. The lobby also has various table games and a health-conscious counter-service café. As witnessed in the lobby, the resort draws inspiration from nature while also presenting a more modern alternative to the Wilderness Lodge and Fort Wilderness campground that bookend it.

A lakefront restaurant with a muted Princess and the Frog theme will offer panoramic views of the lake, similar to Narcoossee's at the Grand Floridian but with more natural tones and larger windows. The restaurant, like the rest of the resort, will take cues from other recent Disney World projects, such as the Gran Destino Tower at Coronado Springs, where Disney characters are introduced in more subtle, adult-friendly ways.


The River Country water park that was previously located on the site where the hotel now sits will live on via multiple nods in the pool area.

Out of the 900 suites at the resort, only a handful will offer only one bed, with most offering two or more beds spread across multi-room suites. Similar to other Disney resorts, the artwork and decor in the rooms will draw inspiration from Disney films, with characters such as Bambi and Pocahontas adorning the walls. Natural wood and stone give the bathrooms a spa-like ambience. Some rooms will be multi-story.


Waterfront A-frame bungalows are expected along the lakeshore at Reflections. Rumor has it Disney is also looking to add waterfront and over-the-water cottages to other resorts, including Reflections, the Contemporary, and possibly another yet-to-be-announced resort near the TTC.

Disney isn’t finished once Reflections opens. A spree of recent land purchases seems to point to a reworking of the Magnolia golf course, which could indicate the company is once again moving forward with a long-shelved multi-tower expansion of the Polynesian resort. Two more sites in the Magic Kingdom’s vicinity are also being looked at for an ultra-boutique luxury resort, potentially with direct access into the park, and there are still plans for a third tower to eventually join the two current ones at the Contemporary.

Reflections is expected to open in 2022. Other resort projects are still in the early stages, with any potential opening many years away.