Work on I-4 'Ultimate' project, which is 250 days behind schedule, will move faster because of outbreak 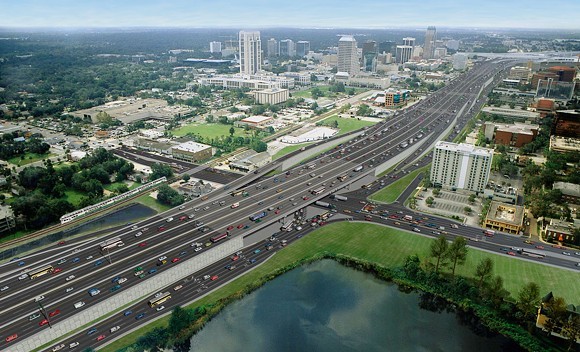 Sections of the massive Interstate 4 “Ultimate” project in Central Florida will see accelerated work as the state takes advantage of a coronavirus-created reduction in traffic.

Gov. Ron DeSantis and Department of Transportation Secretary Kevin Thibault said Saturday that work will be moved up a month or two on parts of the 21-mile project in Seminole and Orange counties.

“We should take advantage of this pause,” DeSantis said. “People aren’t able to go to work. Kids aren’t going to school. There’s a lot of negatives involved. The fact that we don’t have as many people on the roads, let’s take advantage of that and try to make some progress.”

The $2.3 billion project is more than 250 days behind schedule.

On April 1, the state announced that about $2.1 billion in other road projects from Key West to the Panhandle were being moved up by weeks or months as traffic on many heavily traveled roads had become a “trickle,” with jobless claims spiking and most of the hospitality industry shutting down or scaling back because of COVID-19, the respiratory disease caused by the coronavirus.

DeSantis said the work won’t increase the cost of the project, which ultimately is hoped to relieve traffic on one of the state’s most-congested highways.

Thibault said the goal is to complete the State Road 408 interchange work, which is designed to ease a major traffic bottleneck, by Independence Day.

“We’re trying to get things done so that when normalcy returns (after the COVID-19 outbreak subsides), everybody getting back, the normalcy can also happen as part of the roadways,” Thibault said.

Thibault said the need for physical distancing to slow the spread of the virus also isn’t hampering progress on planning for other projects, such as three new or expanded toll roads stretching from Collier County to the Georgia border.

“Fortunately, we’ve been able to do everything to keep the projects going, the engineering community for the most part can do their things virtually,” Thibault said, adding, "We are on the cusp of actually doing 3-D design in our engineering plans. So, they’re able to continue to develop projects and move those projects forward, even in this world.”


Please follow CDC guidelines and Orange County advisories to stay safe, and please support this free publication. Our small but mighty team is working tirelessly to bring you news on how coronavirus is affecting Central Florida. Please consider making a one-time or monthly donation. Every little bit helps.