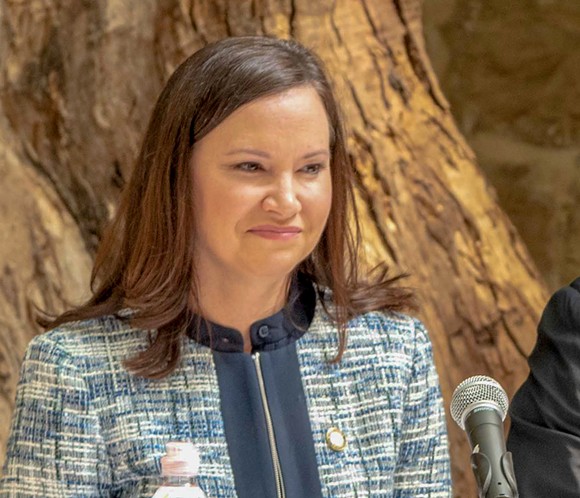 While continuing to oppose a proposed constitutional amendment that would allow people to use recreational marijuana, Attorney General Ashley Moody does not want to rely on a controversial new law to kill it.

Moody’s office filed a 17-page brief Monday at the Florida Supreme Court that diverged from arguments by the state Senate, which says part of the new law should scuttle the ballot proposal. The law, passed last month, calls on the Supreme Court to consider whether ballot proposals are “facially invalid under the United States Constitution.”

Senate attorneys contend that the recreational marijuana proposal clashes with federal laws that make marijuana illegal. As a result, the Senate argues the marijuana measure would violate the U.S. Constitution’s “Supremacy Clause” and should be blocked from going before voters in 2022.

Moody also wants the Supreme Court to block the proposal because she contends it would be misleading to voters. But in the filing Monday, Moody’s office said justices should not consider whether it runs afoul of the U.S. Constitution.

“Because the misleading ballot language provides an adequate and independent ground for resolving this case, the (Supreme) Court need not – and, based on traditional principles of judicial restraint, should not – address the facial validity of the proposed amendment under the United States Constitution,” the brief said.

Moody’s office also said it doesn’t plan to weigh in on the constitutionality of the marijuana proposal.

The Florida Supreme Court plays a critical role in determining whether proposed constitutional amendments go before voters. tweet this
“Pre-enactment consideration of potential challenges to the validity of proposed constitutional amendments raises particular concerns for the Office of the Attorney General,” the brief said. “As the chief legal officer of the state, the attorney general is often called on to defend and enforce duly enacted state laws, including state constitutional amendments. In keeping with that duty, the attorney general routinely declines to pass on issues that may be the subject of future litigation implicating the validity of state laws. Accordingly, the attorney general does not intend to take a position on the facial validity of the proposed amendment at issue in this case.”

The Supreme Court plays a critical role in determining whether proposed constitutional amendments go before voters, reviewing ballot summaries and titles to determine whether the proposals meet legal standards such as not being misleading. Justices are scheduled May 6 to hear arguments about the recreational marijuana proposal, which is sponsored by the political committee Make It Legal Florida.

The law passed last month by the Republican-controlled Legislature included a series of changes designed to make it harder to pass constitutional amendments, including calling on the Supreme Court to look at whether proposed amendments violate the U.S. Constitution. State laws in the past have not so explicitly called on the Supreme Court to weigh whether proposed amendments could be invalid under the U.S. Constitution.

Senate attorneys have filed documents urging the Supreme Court to use that part of the law to scrap the marijuana amendment. Federal laws generally trump state laws under the Supremacy Clause.

“The passage of (the new law) clarifies the scope of the court’s review and opens the door for the court to consider the inability to comport with federal law,” Senate attorneys wrote in a brief Monday. “Because the initiative is facially invalid under the U.S. Constitution, the court should remove it from the ballot.”

Moody contends, however, that the proposal should be blocked from the ballot because it would be misleading to voters —- an argument the Senate also made in a January brief. She has focused on wording that says the proposal “permits” the possession, sale, transportation and use of marijuana.

“If approved, however, the initiative would not ‘permit’ such activities: Federal law prohibits the possession, sale, transportation, or use of marijuana, and the proposed amendment would not undo or override that law,” lawyers in Moody’s office wrote in the Monday brief.