'Reopen Florida' group is a hotbed for coronavirus protest events, which Facebook says are banned

Facebook confirmed on Monday that it was banning some events that promote and encourage people to organize in-person protests of their state’s lockdown orders during the coronavirus pandemic — but there’s still an active group in Florida pushing for these same protests across the state.

As of now, the Facebook group Reopen Florida! has over 6,900 members.

"This is a group of like-minded people joining together with the purpose of compelling Governor DeSantis to end the unconstitutional shutdown of our schools libraries, parks, beaches, businesses, and economy and REOPEN FLORIDA!" says the group’s description.

Complaints over local stay-at-home orders are among the most prevalent comments in the group, along with thoughts about how the media “isn’t talking about” literally whatever members just read on a random blog, how COVID-19 isn’t real, and posts declaring basic acts of civil disobedience directed at no one in particular.

“I do not and will not practice social distancing!” posted one woman. “A virus is no excuse to deny you your liberty. Whether it has killed 5 or 5 million,” writes another.

But the most alarming posts in this group are the events calling for protesters to organize and gather in-person, in various cities across Florida. One event calls for a “Boots and Wheels on the Ground” protest in Tallahassee on April 22. Another, "Rise Up Now Rally" is planned for April 25 in Fort Myers. None of these mention anything about social distancing or limiting crowds, which are part of Florida's statewide lockdown.

Facebook says it’s focused on "removing content that advocates for in-person gatherings defying government health guidance." tweet this
However, Facebook has said they won't remove events that do follow state guidelines. Similar to last week's protest in Detroit — which involved hundreds of cars blocking a hospital — an upcoming protest organized by the Freedom Keepers planned for this Friday, April 24, in Tampa, says it will be in vehicles. But the description for the event also says they want "boots on the ground on the sidewalks rallying, AND Patriots in cars circling and/or parked while honking!"

So far, 77 people are confirmed for the Tampa protest, and 164 are "interested."

According to the governor’s statewide stay-at-home order, Florida residents are forbidden to gather in groups of 10 or more, and are instructed to practice social distancing of 6-feet apart at all times while in public. So, by all appearances, many of these Florida protests have and would in fact be violating social distancing rules, as well as guidelines on crowd limits.

Creative Loafing Tampa Bay reached out to a Facebook spokesperson and will update this story if they get back to us.

According to members, the Reopen Florida! Facebook group was first started by the people who gathered in Orlando last week to protest Gov. Ron DeSantis’ statewide shutdown. That particular event was also hosted by a local chapter of We Are Change, a radical group of conspiracy theorists and activists who call themselves "patriot journalists" and “truth seekers.” Members have argued that “more people will die from the shutdowns than the virus” and that 9/11 was a cover up by “big corporate media.”

“Mark Zuckerberg has announced he is closing Facebook groups which advocate for freedom. They want to silence us,” said We Are Change in a recent event page for an in-person protest this weekend in Orlando. “Why? That does not reflect the ideals this country was founded upon nor does it honor our right to free speech.”

According to the Orlando Sentinel, the protesters from last week’s gathering in Orlando were not practicing social distancing, and while many wore Donald Trump and MAGA attire, very few wore face masks.

“I feel like the health risk is very overblown and the economic impact is doing more damage to more people,” said one protester to the paper.

A video posted to YouTube from the Orlando chapter of We Are Change also appears to show hundreds of protesters—including young children—standing close together at last week’s gathering.

As Jessica Lipscomb of the Miami New Times pointed out, many of these protests aren’t just born out of sheer outrage. A recent poll found that an overwhelming 60% of Americans approve strict stay-at-home restrictions. However, this hasn't stopped fringe groups from using the perceived civil unrest as an opportunity to spread misinformation and mobilize followers.

For example, Enrique Tarrio, a congressional candidate in South Florida and the leader of the far right extremist group The Proud Boys, is an actual organizer for the upcoming protests in Tallahassee, Orlando and Miami. The Proud Boys were also present at protests last week in Michigan and Ohio.

"I don't think people care right now whoever put this together. I think a lot of people are eager to get out and work," said Tarrio to the New Times. 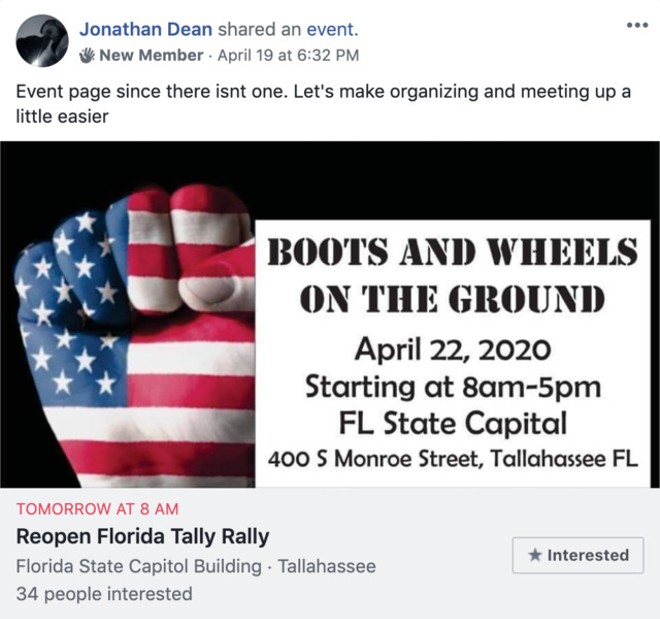 On top of all this, the State Department has already confirmed that Russia is actively spreading misinformation about the coronavirus outbreak, as well as advocating for in-person protest around the country.

This misinformation has found a home on Facebook, despite the new rules on protests. But at the moment, it would appear that getting banned is something that Reopen Florida! administrators are still worried about.

If the Reopen Florida! is indeed banned, administrators of the group say they will then relocate to the conspiracy theory-heavy social media network MeWe, which has been a vital site for anti-vaxxers and QAnon supporters.

“Now we have a plan,” wrote Tara Hill, an administrator for the group. “Calm down.”