Former Orlando congresswoman Corrine Brown was released from prison Wednesday, less than halfway through her five-year sentence for fraud, federal corruption, conspiracy and tax evasion. Her attorney successfully argued that she is especially vulnerable to coronavirus.

Brown was incarcerated her part in stealing roughly $800,000 from a fake educational charity for needy children, using the funds on vacations to the Bahamas and tickets to a Beyoncé concert, as well as directly funneling money to her own bank accounts.

Brown first reported to federal prison on Jan. 29, 2018. Under federal law, an inmate can be let go on compassionate release when there are "extraordinary and compelling reasons." To be considered, a prisoner must have served at least half of their sentence, or 30 months in Brown's case. Most federal inmates serve 85 percent of their sentence, before spending the remainder at a halfway house.

News4Jax reported that Brown was released and heading to her family home on Wednesday, after hearing from a prison official on condition of anonymity that Brown had been set free at 1:25 p.m.

Brown's attorney, William Kent, had originally filed an emergency motion in late February, saying her underlying health conditions put her at a high risk for dying of COVID-19, should she contract the disease. He later withdrew that motion, after hearing Assistant U.S. Attorney Tysen Duva opposed it. After speaking to prosecutors, Kent refiled the request for Brown's compassionate release with more documents and records.

The filed documents say that Brown suffers from a diaphragmatic/hiatal hernia that causes a strain on her breathing and her heart, and that "these conditions would prove fatal were she to become infected with COVID-19." Kent said Brown suffers from hypertension, diabetes, a heart murmur and other health issues, and that he health has "declined considerably" since she was first imprisoned.

Brown's prison unit was being merged with another, with the former congresswoman slated to share a bunk bed with a coughing inmate. tweet this
The conditions, Kent said, "given Brown’s age and medical conditions put her at great risk of death."

Brown already served two years and three months of her five-year sentence at Coleman federal prison in Sumterville, which had an outbreak of Legionnaire's disease earlier this year. During that outbreak, Brown was given an antibiotic for symptoms but not tested.

The fear of a coronavirus outbreak is widespread among inmates in Florida prisons, according to a report from The News Service of Florida published in Orlando Weekly. The Coleman federal correctional complex is the nation’s largest, with more than 6,600 prisoners. The Florida Bureau of Prisons has reported at least one inmate and one guard at the prison had tested positive for COVID-19, but transparency advocates question the timeliness of prison health updates.

Brown's attorney said her conditions reached a "crisis stage" with Brown learning this week that her entire unit is being moved into another, with double-bunk beds, because the facility was bringing in two infected inmates from a county jail. Brown's bunkmate, said Kent, was to be an inmate who has been coughing.

Orlando Bishop Kelvin Cobaris, who was with Brown the day she reported to prison, told News4Jax quoted he and her loved ones were relieved that she is out.

"It was a great concern of her and her family, of course, all of us, that she was there, in the Coleman facility during this time," Cobaris said. "It was very unsettling because, of course, of her age." 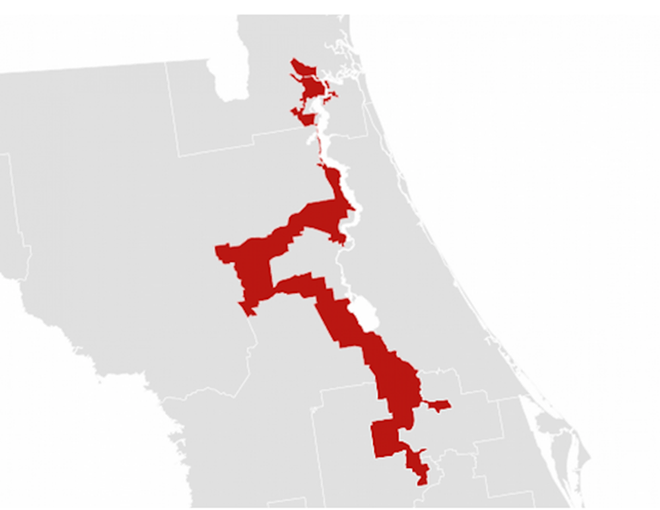 Brown's longtime District 5, a marvel of modern gerrymandering, once stretched from Orlando up north to Jacksonville, before later being redrawn from Jacksonville out west to Tallahassee. She bitterly and unsuccessfully fought efforts at redistricting until 2016, when her political career ended with a primary defeat to former state senator Al Lawson.

When Brown was first elected in 1992, she and two others became the first African-Americans from Florida elected to Congress since after the Civil War.

Prison officials told News4Jax that Brown "put a lot of political pressure on" to get released.