DeSantis 'not going to cry over spilled milk' on unemployment, wants to 'get the checks out' 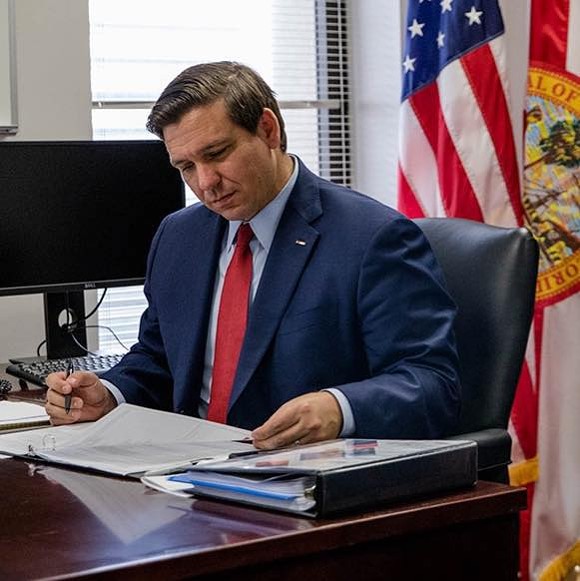 Meanwhile, DeSantis, reiterating his own criticism of the backlogged CONNECT online unemployment system, said he is focused on getting payments to people who are out of work.

“I think it is something that should be looked at,” DeSantis said of the implementation of the CONNECT system. “Right now, though, I'm not going to cry over spilled milk … because my number one concern, outside of health, is to get the checks out.”

Before DeSantis held a news conference at Tampa General Hospital, Democratic members of Congress and the Legislature held a teleconference and called for the state to increase the $275 maximum weekly unemployment payments, expand beyond 12 the number of weeks benefits are available and make payments retroactive to when claims tied to the coronavirus shutdown were filed.

The unemployment system has come under widespread criticism since the coronavirus forced businesses to shut down or dramatically scale back, causing a surge of people seeking benefits.

The state took down the CONNECT system on Friday and said it would begin operating again at 8 a.m. Monday, but the system remained down an extra 2 ½ hours. The system went offline as the Department of Economic Opportunity scrambled to process applications and reduce a massive backlog of claims.

"Right now, though, I'm not going to cry over spilled milk ... because my number one concern, outside of health, is to get the checks out." tweet this
A Department of Economic Opportunity spokeswoman described the Monday morning delay as “nothing new.”

The latest numbers posted online by the department showed that 1.9 million claims for jobless benefits had been filed by at least 824,279 people between March 15 and Sunday. The difference is due to people filing multiple times, at least in part because of problems with the system.

Of the claims filed, 386,926 people had received at least one payment, or 46.9 percent of the unique claims, as of Monday afternoon. The amount paid out was above $498 million.

The Orlando Sentinel reported Monday that 37 percent of the processed applicants had been deemed ineligible for unemployment compensation.

Department of Economic Opportunity spokeswoman Tiffany Vause in an email Monday said people can be deemed ineligible for issues including “wage base period issues, lack of wage history, among others.”

“Many of the individuals that were deemed ineligible this weekend could be eligible for federal benefits through the Pandemic Unemployment Assistance program,” Vause said in the email, referring to benefits that are part of a federal stimulus law. “The agency is working diligently to get more detailed information to individuals who may be eligible for federal benefits.”

DeSantis said about 500,000 Floridians would receive checks Monday, saying that, “If you had a job and lost it, obviously you’re eligible.” However, he noted that there were some people “applying who haven't been working for quite some time.”

People applying for $600 weekly checks through the federal-stimulus law also need to go through the state system. Information posted online by the department didn’t include numbers for people who apply through the system for federal funding yet fail to qualify for state payments.

Democrats said Monday they will ask the U.S. Government Accountability Office for an investigation into the $77 million CONNECT system, which state Sen. Jose Javier Rodriguez, D-Miami, described as having an “anti-worker design.”

“I think the accountability has to range, not just on the spending and the contracts, and how we got into this system, but overall, the designed system,” Rodriguez said.

The Democratic lawmakers criticized U.S. Sen. Rick Scott, who was governor when the state implemented CONNECT in 2013.

“It was during my last year as governor that we made the contract with Deloitte to have this system,” said Congressman Charlie Crist, who was elected governor as a Republican in 2006 and later became an independent before leaving the governor's office in 2011. “I had very little time to review it once that occurred. I left office and Gov. Scott came in and was there for eight years as you all know. That’s a long time to have an opportunity to analyze, to investigate, to look into and make sure the system called CONNECT, which is a real disconnect obviously, is working appropriately and properly. Evidently that didn’t happen.”

In a campaign fundraising email last week, Scott contended that people now out of work nationwide were already reluctant to return to their jobs because of state and federal unemployment benefits.

“Businesses looking to reopen are telling us their employees don’t want to come back to work because they collect more on unemployment,” the email said. “And who can blame them?”

Frankel said Florida’s benefits fail to meet the minimum wage and, combined with the federal stimulus funding, are less than what many Floridians typically earn.

Satter on Friday said the state would make payments retroactive to when people applied, starting with those who applied after March 9. The action hadn’t been formally posted Monday afternoon.

The state has lifted requirements that applicants for benefits fill out the full work registration and document five job searches weekly to maintain the benefits. Those changes end May 2.

DeSantis on Monday acknowledged “a lot of architectural problems” and “a capacity issue” with CONNECT.

“It could have been done, I think obviously, better,” DeSantis said. “But at the end of the day, you know, my job is to fix problems when they arise. The agency said this was a good system a month ago. Obviously, that was not accurate. And I wish that they would have been more proactive. But we've got to fix it. So, that's what we're doing.”