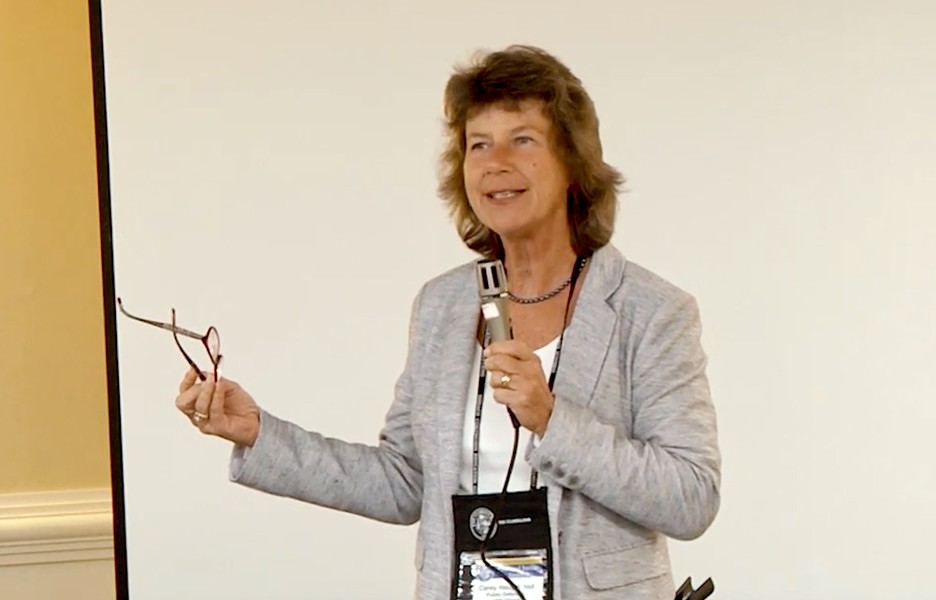 Payment of such “legal financial obligations,” a requisite for felons to regain the right to vote under a state law passed last year, is the crux of the closely watched trial that could have a significant impact on Florida’s presidential election in November.

The Republican-controlled Legislature included the requirement that court-ordered financial obligations be paid in a law aimed at implementing a 2018 constitutional amendment designed to restore voting rights to felons who have completed the terms of their sentences.

Voting-rights groups representing felons in the lawsuit allege that linking finances and voting rights amounts to an unconstitutional “poll tax,” while lawyers for Gov. Ron DeSantis’ administration insist that last year’s law carries out the words and intent of the constitutional amendment.

Most felons, called “returning citizens” by proponents of what appeared as Amendment 4 on the November 2018 ballot, are unable to pay the financial obligations affiliated with their convictions, Palm Beach County Public Defender Carey Haughwout told U.S. District Judge Robert Hinkle on Tuesday.

Florida voters passed Amendment 4 in 2018 with 64.55 percent of the vote. tweet this
About 80 percent of defendants charged with felonies in Palm Beach County are indigent, said Haughwout, president of the Florida Public Defender Association. In Miami-Dade County, approximately 75 percent of felony defendants are deemed indigent by the court, according to the county’s public defender, Carlos Martinez.

State and local laws include dozens of fees that can be charged to defendants and included in their sentencing orders, along with restitution and applicable fines, Haughwout said. The charges vary from one county to another throughout the state.

In Palm Beach County, the minimum amount assessed to people who are represented by public defenders and are convicted of felonies is $668, according to Haughwout. An extra $88 is tacked on for each additional felony count.

Costs in the county can include a $50 application fee for court-appointed counsel, $100 for prosecution and $20 for the Crime Stoppers trust fund, along with fees for the “crimes compensation trust fund,” the “additional court cost clearing trust fund,” and teen court, Haughwout said.

“There’s just a variety of costs,” she said. “It seems that every other year or two there’s some additional $2 cost, or $3 cost, or $100 cost that have been added to these costs, over the years.”

Convicted felons often have a difficult time finding housing or employment after they are released from jail or prison, Haughwout said. Paying the financial obligations is an insurmountable obstacle for many returning citizens, she said.

“The majority are people who are simply struggling to make ends meet,” she said. “The additional costs are simply more than they can bear. These aren’t folks who have an extra $500 in a savings account that they can put towards these costs, or extra money to set side toward these costs.”

Nicholas Primrose, DeSantis’ deputy general counsel, told the public defender that the $20 fee for the Crime Stoppers trust fund is a “direct benefit” sent “back to the circuit and community where the crime was committed.”

The program awards money “for tips that lead to successful arrest of crimes,” Primrose said.

“So the continued funding of a program designed to curb violence and stop crime would be a public benefit,” he said.

Haughwout pointed out that the fees also support other trust funds, as well as the state prosecutors’ and public defenders’ offices, Haughwout said.

“All of those are certainly public benefits. It’s just the decision to fund them through trust funds, rather than general revenue allocations,” she said.

About 90 percent of felons in Palm Beach County end up on payment plans with the court following their convictions, Haughwout said. The payments range from $20 to $50 per month, she said.

“They’re simply unable to pay a lump sum amount, understanding that lumped in there can be restitution and some other costs as well,” the public defender said.

In a preliminary injunction issued in October, Hinkle ruled that state cannot deny the right to vote to felons who are “genuinely unable” to pay financial obligations associated with their convictions. The 11th U.S. Circuit Court of Appeals upheld the injunction, which applied only to the 17 named plaintiffs in the case. Hinkle this month granted class certification to plaintiffs, adding potentially hundreds of thousands of felons to the lawsuit.

In Orange County, the circuit court collected about 11 percent of the $12.8 million owed in fines and fees. tweet this
Hinkle’s October ruling also ordered the DeSantis’ administration to come up with a process in which felons could try to prove they are unable to pay financial obligations and should be able to vote.

DeSantis and his administration are fiercely defending the state law, despite a series of decisions pointing toward a final decision by Hinkle in favor of the plaintiffs.

Under pressure from plaintiffs’ lawyers in the days leading up to the trial, attorneys representing the administration released a procedure for identifying felons who had outstanding financial obligations. Plaintiffs’ lawyers maintain the process is inadequate and accused the state of intentionally waiting until the last minute to release the details.

While most trials have been shut down to comply with social-distancing measures imposed due to COVID-19, Hinkle decided to hold the trial by video conference, with dozens of lawyers and witnesses participating in the proceedings. Members of the public are able to listen by phone to the trial, which is expected to end Friday.

Tuesday’s session was dominated by testimony of the two public defenders, who focused on the burdens the court-ordered financial obligations impose on felons.

Felony defendants in Miami-Dade County are charged between $700 and $800 on average, Martinez said. The charges include a $65 fee authorized by a county ordinance and “a whole litany of other charges that are imposed on your typical case,” said Martinez, who was first elected to the post in 2008.

Ascertaining someone’s outstanding financial obligations, especially in sentences that were handed down a decade or more ago, is a complicated process even for people highly adept at using court databases, he added.

“It would be quite cumbersome for a lay person to go through this process without somebody’s assistance,” Martinez said.