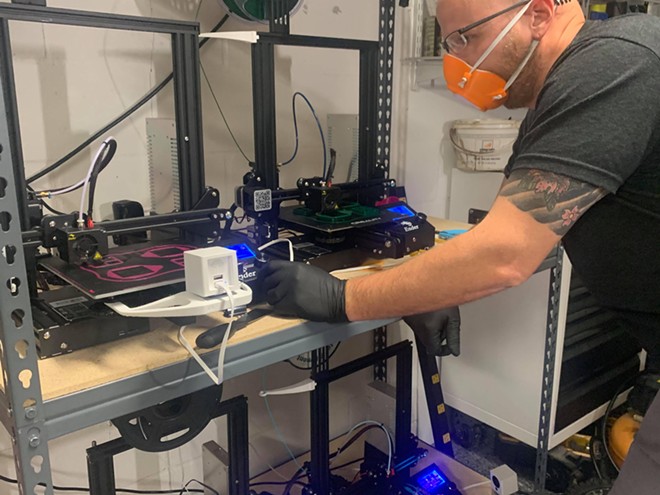 As Americans, donating to help out a friend with medical bills isn't an unfamiliar notion.

GoFundMe pages for expensive surgeries and treatments are commonplace for most of us. We choose which cases are most deserving of our own hard-earned money, even as we ourselves may have a few unpaid medical bills lying around.

This is the standard, the "before" picture of the American healthcare system. A system that we – for whatever reason – have chosen to accept, nearly unchanged, for years. It's a system that, up to now, has worked to keep about 72 million Americans on Medicaid and about another 44 million uninsured altogether, with the most tragic of cases going lamented by a sorry shake of the head.

In the new world of COVID-19, however, the weaknesses of this healthcare industry are becoming harder to ignore.

Though widely addressed by now, just a few weeks ago, news feeds were filled with stories of first responders and healthcare workers battling in the front lines of this pandemic without proper PPE. At one point recently, the need was so great that hospital-themed movie and TV productions were donating their medical props to the trillion-dollar healthcare industry to protect workers.

The shortage was also affecting the other side of our communities, like other essential workers and the elderly. With not enough personal protective gear to go around, and with healthcare workers needing most of it, some people started fashioning their own makeshift masks. Unfortunately, many were not safe to help contain spreading, but without resources they had no other choice.

The need was so great that hospital-themed movie and TV productions were donating their medical props to the trillion-dollar healthcare industry to protect workers. tweet this
Many of us are still having a hard time finding safety products in ransacked stores or reasonably priced masks online, if they're even in stock. Being that this pandemic is changing the world as we know it, it looks like the need for these masks is not going away any time soon.

But not everyone is reacting to this with thoughts and prayers. Some people, like Davenport local Jason Mencer, have decided to act. His Facebook fundraiser simply called "3D Printing for Healthcare & Essential Workers" raised well over its $2500 projected goal and has delivered close to 300 masks to people all over the U.S.

"I just saw that things weren't getting any better," Mencer said. "I have friends out there who are nurses with maybe only one mask to use for an entire day."

Mencer is an "essential worker," employed with Amtrak for the last 10 years. Seven of which have been serving the customers of the downtown Orlando station, right by Orlando Health. Working so close to healthcare workers, Mencer says he has many friends in the field, as well as an entrepreneurial spirit.

Having a passion to labor with his hands, Mencer did wood work for a long time, but it was becoming a time-consuming hobby for the husband and father of a family of six.

When he got his first 3D printing machine in January, he did so with the intention of making hitch covers for pickup trucks. When the world began to change, however, Mencer shifted his focus to a more humanitarian end.

"If I can help somewhere, I try to," Mencer said. "And 3D printing has always fascinated me."

Mencer got his inspiration from a friend who works in healthcare and suggested he start the fundraiser. He then went to the website Make the Masks to learn the best, most accurate way to develop an effective and safe mask. The point, he says, is to help community members who may not feel safe without masks during this time, whether they work in healthcare or not.

"It's definitely having a huge impact for people who don't have PPE to wear and need that sense of security," said Deeann Daniels, a registered nurse at Winter Haven Hospital and Mencer's friend.

The work, like anything else, is not without its challenges.

Mencer says that, though the machines do the main part of the work, they still need to be watched and re-spooled. Then, the masks have to be packaged with all the necessary items to be built and be shipped.

His wife, Erin Mencer, works full time from home and, with the kids, doesn't have a whole lot of time to share. However, she says she sometimes uses her lunch and break times to re-spool the machines for Mencer while he's at work - just trying to do her part in whichever way she can, as she is a big fan of this project.

"I think it's awesome," Erin Mencer said. "And I want to help, too, you know? People need masks and they can't find them."

The funds, Mencer says, get poured right back into the service to advance and streamline the process. He started out with just the one 3D printing machine, which he purchased for $400, but he's now up to four machines. He has them all running simultaneously every day.

"We're not doing this to make money," Erin Mencer said. "A lot of people get upset out there, thinking we're just trying to get rich. But truly the money that he receives is just going back into purchasing more supplies to keep going."

He started out with just the one 3D printing machine, purchased for $400, and is now up to four machines, all running simultaneously every day. tweet this
Funds have not only gone into more machines but also into purchasing different materials, parts for fixing the machines when they break and shipping costs.

Mencer's neighbor, Genna Williamson, a home-schooling mom, has a printing machine, too, and offered to help. She replied to his post on Nextdoor, a hyperlocal social networking app. She says Mencer provides her with what she needs for her machine and that it can make anywhere from four to six masks a day, if she keeps it running steady.

"We just have the one machine at home chugging away as we can," Williamson said. "He's the workforce behind it all. I just wanted to feel like we were contributing."

Mencer has upgraded his style and technique from when he began, as he has learned a few things along the way. He can do different designs and even rainbow colors, a big hit with the little ones.

Though the fundraiser itself has ended, Mencer is still hard at work taking orders over Facebook. He can still be reached and takes a variety of forms of payment to make donating easy and convenient for those who need the masks or want to help.

This community effort, Mencer says, has been received with mainly positive reactions and inspired even more people to help. In an already broken healthcare system, Erin Mencer says the point of this is to make it easier for those finding it hard to cope and stay safe during these worrisome times.

"We both have full time jobs, and we've been blessed where we don't have to worry about being unemployed or without healthcare," Erin Mencer said. "We're just trying to give back, is really all it is."