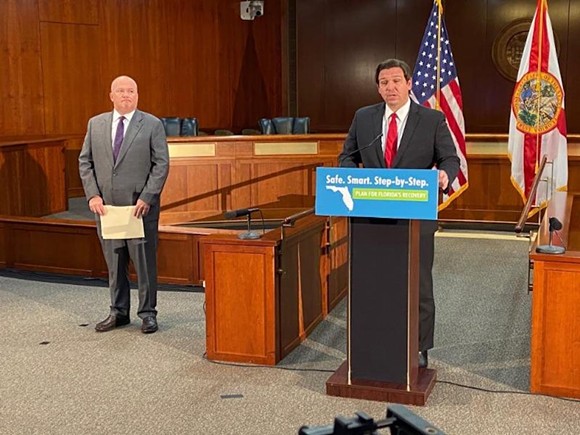 Gov. Ron DeSantis on Monday defended his administration’s efforts to get the state’s much-maligned unemployment system to handle the unprecedented surge in applications caused by the coronavirus.

Meanwhile, Democrats blasted the management of the system, which has had nearly 40 percent of applicants rejected and more than 200,000 claims unprocessed.

With more than 1 million “unique” jobless claims filed since mid-March and Monday marking the start of a soft economic reopening of the state, DeSantis said the claims numbers “are starting to look much better,” and he hopes many people can soon return to work.

DeSantis again promised to require a review of the history of the $77.9 million CONNECT online unemployment system, which went live in 2013 under then-Gov. Rick Scott.

DeSantis also said he would consider a request to bar from future state contracts Deloitte Consulting, which had the largest portion of the contract in setting up the CONNECT system.

"People are desperate. They are crying. They are angry, and this is not OK." tweet this
“I think everything needs to be looked at 100 percent,” DeSantis said during an early evening news conference.

Democrats said after DeSantis’ news conference they would welcome legislative hearings on CONNECT, before adding that first the governor should concentrate on the current demands on the system.

“We were disappointed in the response from the governor today,” said Sen. Gary Farmer, D-Fort Lauderdale, in a teleconference with his colleagues. “We would have loved nothing better than to get on this Zoom call and say, well, thank goodness, we've got some action happening, and things are being fixed and claims are going to start getting paid.”

Sen. Lori Berman, D-Lantana, added that the system has been treated “with total ineptitude.”

“People are desperate,” Berman said. “They are crying. They are angry, and this is not OK. We thought that the governor would give us some answers. When Is everything going to be done? We need answers. We don't need to have reports just on what happened in the past.”

Earlier in the day, Agriculture Commissioner Nikki Fried, the only statewide elected Democrat, pushed for a review of the claims system.

In asking Chief Inspector General Melinda Miguel to review the management of CONNECT, Fried said in a letter that several audits over the years have detailed more 600 issues with the system, “about which the governor was briefed in 2019.”

“Despite these known failures, the governor has not acted with the urgency or transparency that the situation necessitates,” Fried wrote in the letter to Miguel.

“As head of the state’s consumer protection agency, I make this request on behalf of the thousands of Floridians who have been unduly frustrated by their state government’s inability to timely process requests for unemployment assistance, for whom economic recovery depends on the competent government response they deserve,” said Fried, who heads the Department of Agriculture and Consumer Services.

Complaints continue about the online system going down as people fill out applications and about a large number of people being deemed ineligible for benefits.

Overwhelmed by claims starting in mid-March, the Department of Economic Opportunity opened a backup online site for new claims and allowed people to fill out paper applications.

DeSantis called the CONNECT system “convoluted” and said he never saw a 2019 audit that highlighted problems with the website.

"I think everything needs to be looked at 100 percent," DeSantis said during an early evening news conference. tweet this
“I've read the report since it became fodder,” DeSantis said. “But it was not something that ever reached my desk. The problems that we're having to talk to the engineers (about) are beyond what was in that. So those may have been good recommendations. But I don't know that that is the reason why we're dealing with the problems that we're dealing now. I think these are different problems.”

Since March 15, the state has received 1.78 million unemployment applications, of which more than 1 million are considered “unique,” as some people filed more than one claim.

The state Department of Economic Opportunity said more than $979 million has been paid out to applicants, of which $702 million, or 71.7 percent, is money from a federal stimulus program.

DeSantis said he hasn’t made a decision on extending a suspension of a “work search” requirement for people seeking jobless benefits to show they applied for five jobs during each of the 12 weeks when they are eligible for state benefits.

Sen. Jose Javier Rodriguez, D-Miami, called it “perplexing the governor hadn’t extended the hold on the work-search requirement as “much of the service economy is still closed, and employers are not required to adequately protect workers.”

“Families who needed a bridge across this economic crisis are being cut off when they need it most,” Rodriguez said in a statement.