Crown Lounge restaurant and bar, located off of State Road 50 in Clermont, reopened its doors on Monday with a new message on their lighted sign reading, "F..K CHINA WE ARE OPEN! BUY AMERICAN!"

A post on Tuesday to the private Facebook group "Orlando Foodie Forum presented by Tasty Chomps" shared two photos of the sign, and received hundreds of negative comments in the five hours after it appeared. The original poster declined to share the photos for publication, but others have shared their own photos online, and employees at the Crown Lounge verified the contents of the original message, which was later taken down.

The manager of Crown Lounge, who asked us not to use her name, stated that the owner of the establishment was behind the sign and that she and the other bartenders were not aware that the sign would be put up.

When the caller asked Crown Lounge if he could bring his Chinese friend to the venue, the woman on the phone asked him to hold while she checked. She then responded, "no, he is not allowed." tweet this
"The owner actually put that up and, like he said, it wasn't meant to hurt anybody," the manager said. "It was kind of a joke due to the government and what's going on. He didn't mean to hurt anybody's feelings and he apologizes."

The restaurant and bar, which turned 60 last year, has faced backlash from the community along with several calls from locals regarding the sign. The Facebook post led to members of the Orlando Foodie Forum page calling Crown Lounge to inquire as to whether the establishment would actually turn down any customers due to their ethnicity or nationality.

One person who commented on the original post called Crown Lounge around 5 p.m. on Tuesday, May 5, curious if the sign indicated that the venue would turn down Chinese customers. 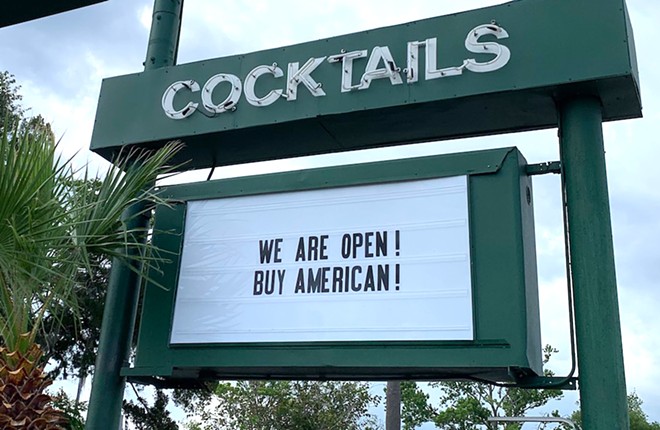 "I wasn't necessarily trying to bash them ... what I saw was a little ignorant sign and thought 'OK, let me give them the benefit of the doubt and offer them the chance to clarify what they meant," the commenter said.

The commenter told Orlando Weekly he asked if he could bring his Chinese friend to the venue. He says the woman he spoke to responded by asking him to hold while she checked. He said that the worker stated, "No, he is not allowed" in the venue.

Curious whether Crown was actually turning customers away, another person who commented on the post said she also called Crown Lounge on Tuesday at 6:07 p.m. She did not receive the same response, however, when she asked if the venue was turning down any customers.

Orlando Weekly spoke to the commenter, who shared that the female worker was polite and said they were not actually turning any customers away. The commenter told us, "He didn’t mean any disrespect to any nationalities ... she was kind of polite about it ... and she goes 'the only time we turn people away is if we’re at capacity ... but I don’t care if you’re black, white, green, purple, we’re not gonna turn anybody away.'"

When the caller suggested to the employee that the owner take down or change the sign, she was assured that the owner would, but that they were unsure at that point of when it would occur.

Another Yelp reviewer left a one-star rating of the Crown Lounge on Tuesday, posting a photo of the sign as the reason.

"With what's going on in the world currently, to see an establishment like this portray a message like this is tasteless. I been here years ago and it's probably one of the nastiest places to be," wrote Mike "Yeezy" Y. "Bad taste in sign messaging."

The man sitting alone at a table said to me, "if you're here about the sign, I have no comment," even though I didn't ask him for a comment. tweet this
Despite all the backlash, which led to the bar taking down its Facebook page, Crown Lounge continued to serve patrons. At 5 p.m. Wednesday, the dining room seated one man alone and a small group of people at the other side of the dining room. The manager and customers were not wearing masks but were following social distancing guidelines.

"We have a really good regular clientele here and ... our regulars have been coming back," the manager said.

The Crown Lounge assured this reporter they had taken steps to follow regulations issued by Clermont Mayor Gail Ash and Florida Gov. Ron DeSantis, such as ensuring that the dining area does not exceed 25 percent capacity.

"We have someone at the door and make sure we have a good count and once we are at capacity, we turn people away so that they can wait in the parking lot or when someone leaves," the manager told me on the phone.

When I visited the establishment to report this story for Orlando Weekly, no one greeted me at the door, so I walked farther in. The man sitting alone at a table said to me, "If you're here about the sign, I have no comment," even though I didn't ask him for a comment.

After waiting five minutes, the manager, who was not wearing a mask, greeted me. She apologized for the sign and emphasized that it was the owner of Crown Lounge who had put it up on Monday night and taken it down on Tuesday around 3 p.m.

When I asked to speak to those in the dining area, the manager said that they were regular customers and would not want to make any comments. The owner was also not able to comment, as he was out of town, but the manager stated that "he said to keep it simple and sweet."

She also assured me that the venue is "offering food to everyone."