After a steady diet of pizza grease and sand, a lizard in Florida recently broke the record for largest crap relative to a living organism's body size.

As recently published in the Herpetological Review, a team of herpetologists from University of Florida was tracking down reptile samples in Cocoa Beach when they stopped by a local pizza joint and discovered a bulbous Northern curly-tailed lizard, which had unusually large fecal bolus that made up nearly 80 percent of its entire body mass.

Ph.D. candidate Natalie Claunch says her team just assumed the female lizard’s abnormally large size was because she was ready to lay eggs, but when they took her in for a CT scan it was revealed she was in fact filled with a giant poop.

"When we went to feel for eggs," said Claunch, "it just felt like it was full of Silly Putty."

The poor lizard absolutely smashes all known records for biggest relative crap, which was previously set by a Burmese python that dropped a deuce of 13 percent of its body mass.

"I was blown away by how little room there was left for all the other organs ­– if you look at the 3D model, it has only a tiny space left over in its ribcage for the heart, lungs and liver," said director of the Florida Museum’s Digital Discovery and Dissemination Laboratory Edward Stanley. "It must have been a very uncomfortable situation for the poor lizard." 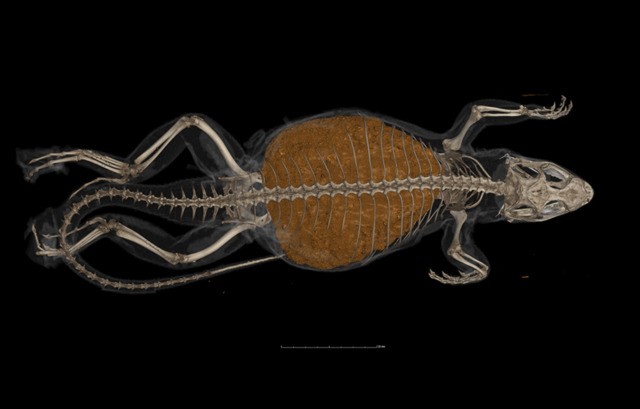 Typically found in Cuba, the Bahamas and the Cayman Islands, Northern curly-tailed lizards are invasive to Florida, and it’s believed they were intentionally released in the early 1940s to battle sugarcane pests. A typical diet for a curly-tailed lizard is bugs and other lizards, but the omnivorous reptile will also eat just about anything, including pizza grease dripped onto a sandy beach.

"They're like sparrows or gulls at a fry stand, without the chirping or swooping," said Claunch, who studies the northern curly tail’s immune system, heat tolerance and adaptability in the lab of Christina Romagosa, assistant research professor in the department of wildlife ecology and conservation.

Sadly, Claunch says the team had to humanely euthanize the invasive lizard, whose giant unpassable crap was causing it to suffer from starvation, but at least the turd lives on in scientific literature.

“We are unaware of any records from wild or captive animals that approach our finding,” Claunch said to Inverse. “We hope for the sake of the individual animals that there are not any out there!”