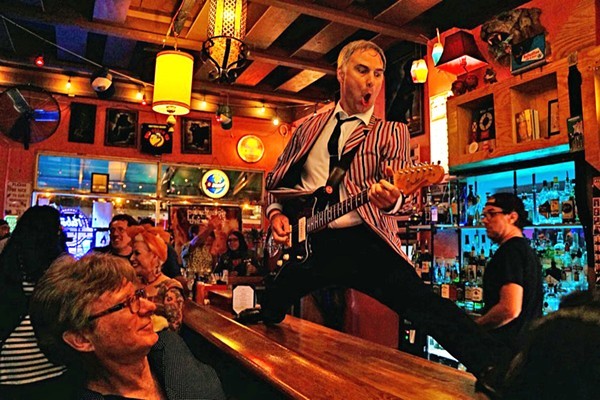 Small independent venues are an essential ingredient for a city to have a vibrant music scene, key in giving support and a spotlight to touring bands on the rise and nurturing local performers who need a place to hone their craft. Locally, places like Soundbar, Will’s Pub, Uncle Lou’s and the Haven Lounge (and so many more) have hosted an unbelievable array of diverse and exciting sounds. Now those venues, as well as similar places all around the country, need help.

“If you take away the independent venues – the developmental venues – how do bands eventually make their way to the big leagues?” asks longtime local promoter Kyle Raker, of Norsekorea Presents. “The local, smaller, independent music venues are essential to the health and growth of our nation’s music and entertainment industries and economies.”

Concert venues in Orlando have been closed since mid-March, and in Florida’s phased reopening plans, they will be among the very last things to open back up. Some clubs and halls might not be able to hang on long enough to reopen, as the pandemic – and a spotty, inconsistent federal and state government response – stretches on.

The National Independent Venue Association – a newly formed coalition of independent venues and promoters – is putting out a clear and impassioned call for federal assistance. Now.

NIVA, already 1,200 members strong, is asking for legislative action including tax relief and grants from the federal government to help tide them over because the bills don’t stop, even if the music does.

“Every show I had scheduled from March through April were almost immediately postponed, canceled or rescheduled to the fall. … Essentially that moves any potential income from the show for me, the venue, the band and the venue’s staff to seven months in the future, and even then it’s still an ‘if.’ So it makes it difficult for everyone involved to suddenly be told, ‘You may or may not have an income at some point later this year. Maybe. Or maybe in 2021,’” explains NIVA member Raker.

“I would certainly say time is of the essence right now. These local independent venues are small businesses, owned by regular people who don’t have millions of dollars cached away to keep things afloat.”

Visit nivassoc.org/take-action to send an email to your Congressional representatives, asking them to take action,

— Please follow CDC guidelines and Orange County advisories to stay safe, and please support this free publication. Our small but mighty team is working tirelessly to bring you news on how coronavirus is affecting Central Florida. Please consider making a one-time or monthly donation. Every little bit helps.