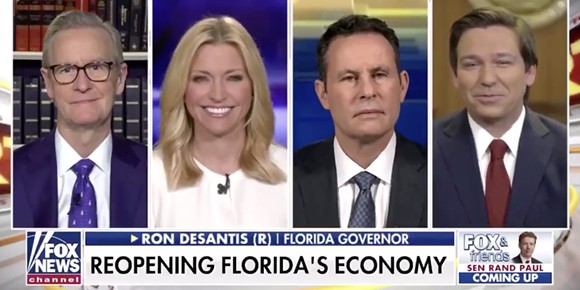 Florida Gov. Ron DeSantis is in talks with the NFL to possibly bring football games to the University of Florida's famed Gainesville stadium, the Swamp.

In appearance on Fox Sports, DeSantis suggested UF's Florida Field, as it's formally known, is available for pro teams to use.

"Good morning, and just so everyone knows, you know, I've already spoken to some of our colleges, like the University of Florida. They got a great football stadium, the Swamp, that's not used on Sundays, so if an NFL team needs a place to land, we can work that out too," said DeSantis in the video.

NEW: An NFL team can use the University of Florida’s stadium this season, Gov. DeSantis says.

UF officials spoke with him on Wednesday. pic.twitter.com/nUPgUVMgAJ

According to the state Division of Health's website, Florida currently has 42,038 residents who are positive for COVID-19, and 1,875 deaths have been caused by the virus so far statewide. The number of daily cases are also continuing apace, as 801 new Florida cases were reported on Wednesday, 807 new cases on Tuesday, and 615 new cases on Monday.

DeSantis is a noted sports fan who partnered with the NFL last year to create a "Python Bowl" to eliminate invasive reptiles – but he's an even bigger fan of his own re-election game plan.

In mid-March, just as multiple NFL teams began suspending their travel and games and the spread of the virus was causing businesses to shutter, the governor took the unusual step of moving the taping of WWE's "SmackDown" show to Orlando. On April 13, DeSantis declared pro wrestling to be an essential business. Orange County Mayor Jerry Demings seemed frustrated by the decision in a press conference the next day.

"If an NFL team needs a place to land, we can work that out too." tweet this
"I think initially there was a review that was done and they were not initially deemed an essential business," said Demings of the body-slamming exception. "With some conversation with the governor’s office regarding the governor’s order, they were deemed an essential business. Therefore, they were allowed to remain open."

DeSantis' decision was likely swayed by a pledge – on the very same day – of $18.5 million to be spent in the Orlando and Tampa media markets promoting DeSantis. The American First Action political action committee making the buys is run by WWE owner Vince McMahon’s wife, Linda.

College football games are currently still suspended, and play may resume in the fall if it's deemed safe enough. The NFL held its draft last month and released a 2020 schedule last week, with the first game set for Sept. 10. If they happen at all.

No word yet on whether UCF's Spectrum Stadium or others could be used, but no matter the locations, fans would not be allowed to attend.