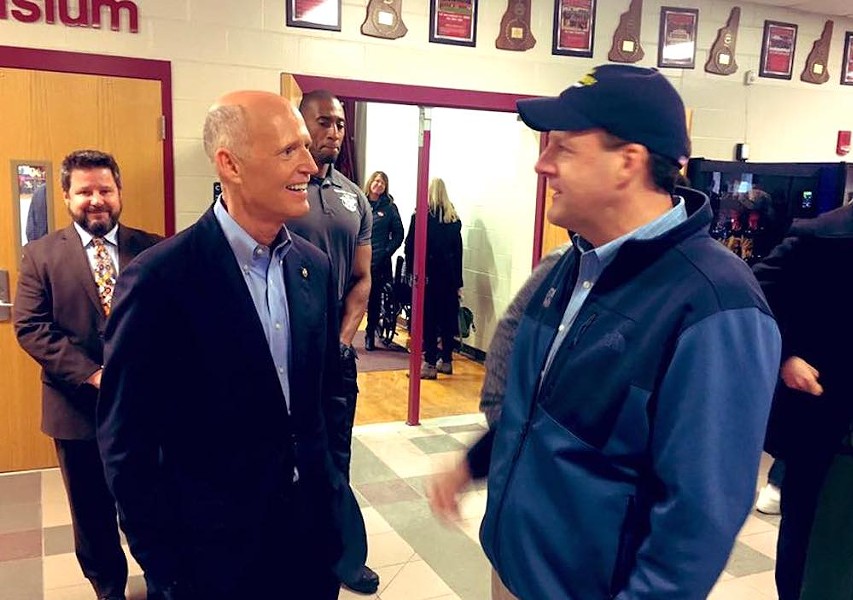 A growing number of Florida Republicans are clamoring for Congress to reject providing an additional round of stimulus funding that they say would go beyond helping state and local governments deal with the economic effects of the coronavirus pandemic.

Gov. Ron DeSantis has put on hold reviewing Florida’s planned $93.2 billion budget for the upcoming fiscal year as he awaits congressional action on a stimulus package. But his predecessor in the governor’s office, U.S. Sen. Rick Scott, R-Fla., was on the Senate floor Wednesday arguing that “we are bailing out liberal politicians who cannot live within their means.”

Scott’s comments came a day after 11 Florida legislators signed on to a conservative organization’s letter asking Congress to block the latest stimulus effort, which U.S. House Democrats unveiled as a $3 trillion package on Tuesday.

The Democrats’ plan is intended to help workers and local governments as the national unemployment rate has reached 14.7 percent. But while Democrats control the U.S. House, the plan isn’t drawing Republican support, with opposition raised by the White House and U.S. Senate Majority Leader Mitch McConnell, R-Ky.

“Now we are asking Floridians to pay for the incompetency of governors like (New York Gov.) Andrew Cuomo,” said Scott, who has been engaged in a running verbal feud with Cuomo over the pandemic response and the economies of Florida and New York.

“We can’t give hard-earned taxpayer money to poorly managed states that are going to turn around and spend it on their liberal priorities and to backfill their budget shortfalls and solve their long-standing fiscal problems,” Scott continued. “States like California, Illinois and New York have big budgets, high taxes, and tons of debt because they refuse to make the hard choices and live within their means.”

"Now we are asking Floridians to pay for the incompetency of governors like (New York Gov.) Andrew Cuomo," said Scott. tweet this
DeSantis on Wednesday criticized the House proposal as “extremely partisan” with “zero percent chance of passing.”

“It's not going to be something I'm going to thumb through, probably thousands of pages. Nobody has probably read it,” DeSantis, a former Republican congressman, told reporters at the state Capitol.

“My view has been, look, if whatever you do, you should look to see where all the states were positioned in February of 2020, and if whatever you do comes out, and states like Florida and Texas lose their competitive advantage, that's not going to be fair for us,” DeSantis continued. “Just make sure that what you're doing is not rewarding states who didn't do a good job managing their finances. It's one thing to say COVID has hurt the economy, you have revenue (problems). OK, we want to help you. But it's quite another thing to say, we're going to use COVID as a pretext to be able to bail out pensions or to be able to do things that really were a result of mismanagement, not a result of COVID.”

On Monday, DeSantis said he has put off formally accepting and reviewing the state budget for the 2020-2021 fiscal year, which was approved by the Legislature in March and is slated to take effect July 1, pending expected assistance from Congress.

As the Congressional Democrats released their proposal, a letter from the American Legislative Exchange Council – backed by nine Florida state House members and two state senators – was addressed to federal officials under the title, “State Leaders Say ‘No Thanks’ to Federal Bailout.”

“While economic conditions remain dire due to government-mandated business closures during the pandemic, federal lawmakers have already granted a general $150 billion COVID-19 relief fund, a $30 billion education costs fund, a $45 billion disaster relief fund and more for state and local governments,” the letter said. “We feel a federal bailout of state budgets would be counterproductive – rewarding states that have made poor financial decisions at the expense of those that have been fiscally responsible.”

The current fiscal year ends June 30. DeSantis and leaders of the Republican-dominated Legislature have indicated the state has enough cash to avoid making any budget changes before then. But bigger questions loom about whether the $93.2 billion budget for the fiscal year that starts July 1 will have to be cut because of plummeting tax revenues caused by the pandemic.

Meanwhile, state Democratic lawmakers have been calling for steps such as boosting unemployment benefits and expanding Medicaid eligibility. They tried to use a process to force a special legislative session but were unsuccessful because Republicans did not go along.

State unemployment benefits top out at $275 a week, and for many of the current recipients the 12-week period of payments will run out in about a month, as many service-based jobs were shut down starting in early March because of the pandemic.

As of Wednesday, the state Department of Economic Opportunity reported 1.94 million unemployment applications since March 15, of which 1.4 million are considered “unique,” as some people filed multiple claims. State payments, totaling $618 million, have been made to 650,612 applicants.