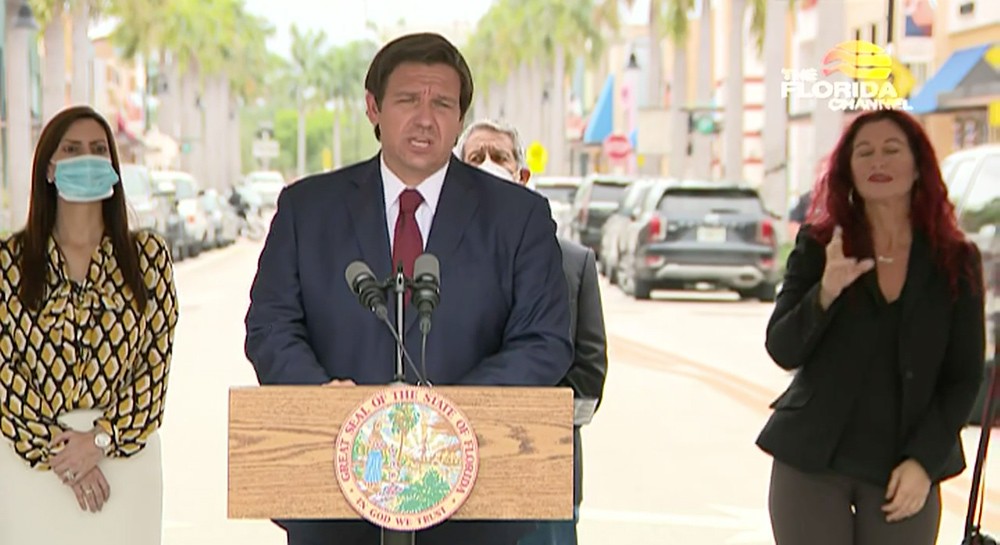 Since late March, Florida hotels have been allowed to operate without state restrictions, while rental properties across the street or even in the same building have gathered dust.

Gov. Ron DeSantis banned vacation rentals on March 27 in an executive order aimed at curbing the spread of COVID-19. The move, kept in place in subsequent edicts, sparked intense pushback from property owners, management companies and some local government officials, especially in the Panhandle.

On Friday, DeSantis announced that vacation rentals could soon roll out the welcome mats again – if county and state officials give the go-ahead.

But the governor’s plan may not quell the outrage – and fear of financial ruin – over losses incurred amid what in some parts of the state is the busiest tourist season.

“I think he passed the buck, but the bomb is still in his lap,” John Adams, an Inglis retiree who owns three vacation-rental properties and sponsored television ads urging DeSantis to “end your unfair ban now,” told The News Service of Florida following Friday’s announcement.

Starting Monday, vacation rentals will be allowed to host guests again if DeSantis’ administration gives the stamp of approval, the governor said during a news conference in Jacksonville, where he announced additional steps in his first phase of reopening the state’s economy.

Counties can submit vacation-rental reopening plans to the Florida Department of Business and Professional Regulation, which will have to sign off on the proposals, according to DeSantis.

On Friday, DeSantis announced that vacation rentals could soon roll out the welcome mats again – if county and state officials give the go-ahead. tweet this
“If you tell me you're going to rent them out to people from New York City, I'm probably not going to approve that, OK?” the governor said of the short-term rentals. “If you're saying that you're going to rent it out to people in other parts of Florida or something that would be manageable, if there's ways in there that clearly you have an eye to safety, then I'm fine.”

The ban prompted an outcry from property owners and management companies that accused the governor of arbitrarily targeting the vacation-rental industry, which generates an estimated $27 billion annually in the state, according to a report by the University of Central Florida’s Rosen College of Hospitality Management.

“The relief for places like the Panhandle and others that are contingent upon the Memorial Day weekend and being open, it could really take them out of the whole picture,” Hanks said in a telephone interview.

In March, DeSantis said the vacation-rental ban was aimed at discouraging visitors from COVID-19 hot spots, such as New York and Louisiana, from bringing the virus into Florida.

DeSantis later extended the ban, while allowing hotels, motels and inns to continue to operate without additional precautions, such as reduced capacity or social-distancing measures.

On Friday, he said he needed hotels to remain open throughout the pandemic to house National Guard troops he activated to help with COVID-19 testing.

The coronavirus pandemic, “stay-at-home” and “safer-at-home” orders have walloped the tourism-dependent Sunshine State. Florida hotel revenue, for example, declined by $2.9 billion between March 1 and May 9, compared to the same time last year, according to the tourism-marketing agency Visit Florida.

The impact on the vacation-rental industry – which has about 275,000 statewide listings – is unknown, but, according to property owners and management companies, it’s huge. The push to get DeSantis to pull the plug on the ban reached a crescendo over the past two weeks.

Owners and management companies pleaded, cajoled and bullied the governor over what many viewed as unfair treatment. His office has received more than 20,000 emails and dozens of videos demanding that the ban be lifted, along with Adams running the TV ads in Citrus and Leon counties.

A group of property owners and investors filed a lawsuit against DeSantis over the ban, accusing him of violating their constitutional rights and asking a federal judge for a temporary restraining order.

At least part of the outcry over the vacation-rental ban came from Republican strongholds. such as the Panhandle, Southwest Florida, Jacksonville and Panama City Beach.

Coastal pockets of Northwest Florida have been especially hard hit, according to pleas that GOP officials in the region made to DeSantis.

The vacation-rental pause came amid spring break, when hundreds of thousands of college students and families flock to Panhandle shores renowned for sugar-white beaches and emerald-green waters. The area’s prime tourism season runs through Labor Day.

Walton County Commission Chairman W.N. Bill Chapman told DeSantis on Tuesday that more than 40 percent of the vacation-rental businesses in the area could shut their doors permanently if the ban isn’t lifted.

In an interview Friday afternoon, Williamson said county officials in Northwest Florida “will communicate with each other,” especially because their beaches often abut.

“I think that he will be very adamant about making sure that the counties’ plans are looked at it in a timely manner and things are released, where we can get people back renting properties again,” he said.

“We’re glad that the governor has listened to the many voices who have called for the reopening of vacation rentals in Florida. As conveyed, vacation rentals are an important part of Florida’s economic recovery as they remain a key source of income for thousands of hosts, small businesses and local governments across the state,” Martinelli said in a prepared statement.

The coronavirus-caused shutdown is the latest controversy swirling around the vacation-rental industry, which has gone to the Legislature to try to be shielded from local regulations. The controversy for years has pitted platforms, such as Airbnb, against local government officials and hotel lobbyists.

The tug-of-war played out this year in one of the legislative session’s most intensely waged battles. A proposed deal was scrapped after DeSantis appeared skeptical.

“We have 22 million people almost. We are a very diverse state. For us to be micromanaging vacation rentals, I am not sure that is the right thing to do,” DeSantis said in February.