An unruly crowd of about 3,000 people gathered Saturday afternoon into early Sunday for a block party across several locations in DeLand. According to the Volusia County Sheriff's Office, the event led to two arrests, one hospitalization and numerous objects thrown at deputies.

The Volusia County Sheriff's Office released footage of the block party on a Facebook post along with an account of what happened. Volusia County Sheriffs worked alongside the DeLand Police Department and encountered "a long gun pointed out of the passenger window of a passing vehicle, a loaded gun handed off from one convicted felon to another, agitated crowds of bystanders and bottles, jars and bar stools used against law enforcement as weapons or projectiles."

At around 10:30 p.m. on Saturday, a passenger in a vehicle pointed a weapon out of the window in the direction of a deputy and pedestrians gathered at a gas station at Beresford and Spring Garden avenues. The vehicle proceeded northbound on Spring Garden at a high speed and deputies and police officers were not able to find the vehicle.

Crowds eventually became overwhelming and began impeding traffic. Deputies and police officers were sent to different areas to dissipate and control the crowds.

After the arrest, a deputy said to another deputy, "welcome to DeLand." tweet this
One of the areas that was patrolled was the 1200 block of S. Delaware Ave., where about 1,500 had gathered.

According to a police report, Volusia Deputies Bivone and Cort assisted in handling crowd control, physical fights, vehicle violations and weapon complaints around midnight. A few moments after the deputies conducted an arrest at S. Delaware Ave., a partygoer, Kevis Murphy, struck both deputies with a red Solo cup filled with an alcoholic beverage. Murphy was standing around approximately five women and was assisted to the ground and taken into custody for two counts of battery on a law enforcement officer. Footage captured the voice of a woman yelling at the deputy that Murphy "ain't do shit."

While the deputies took Murphy into custody, Deputy Cort was struck on the side of his head by an unidentified black man. Another deputy and officer were hit with a bar stool, a Mason jar and glass bottles. One deputy sustained a minor knee injury and an officer had a minor head injury when he was hit by the jar. 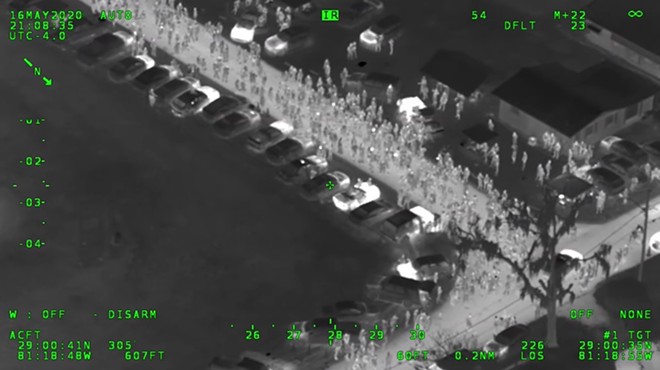 Murphy was searched and officers found a black Taurus pistol in his front upper waistband. The weapon had one round in the chamber and was loaded with 12 rounds of 9mm ammunition. Murphy does not have a concealed weapons license. Murphy was also charged with possession of a concealed firearm and was transported to the Volusia County Branch Jail. Murphy has had seven prior felony arrests but zero felony convictions, and eight misdemeanor arrests with four misdemeanor convictions.

After the arrest, a deputy said to another deputy, "Welcome to DeLand," which was captured on police video footage.

Also in the 1200 block of S. Delaware Ave., Deputy Leven was conducting foot patrol due to the crowd and observed an Infinity FX35 parked. Deputy Leven told the driver to move or the vehicle would be towed.

According to a police report, Alphonso Parker and Charles Turner walked toward the back of the vehicle and Parker reached into his waistband to remove a silver handgun that Turner and Parker handed back and forth a few times. Deputy Leven approached the two men, at which time Turner fled. Deputy Leven removed his department-issued firearm and chased Turner. Footage shows Deputy Leven chasing Turner and yelling "put your hands up, put your fucking hands up," while the police report states that Deputy Leven commanded Turner to drop the firearm.

Turner threw his weapon into a dirt lot and continued running. Turner then fell on the ground and Deputy Leven attempted to secure Turner.

Footage shows Deputy Leven chasing Turner and yelling "put your hands up, put your fucking hands up," while the police report states that Deputy Leven commanded Turner to drop the firearm. tweet this
Deputy Mather arrived and assisted Deputy Leven in securing Turner as he continued to fight. A large crowd circled around the two deputies as they were hit by various objects and yelled at while attempting to secure Turner. Deputy Turner had to use his department issued Taser and drive-stun Turner in his back to secure him. Turner was charged with the possession of a firearm by a convicted felon and of ammunition by a convicted felon, tampering with evidence, inciting a riot and resisting.

After the arrest, a deputy stated on footage, "I've been hit in the head by a beer bottle, I've had a rifle flagged at me, um, it's going great." Another deputy stated, "this is the worse its been here in a long time, oh yeah, this is mid’-90s right here."

On Sunday, a 34-year-old man who attended the block party was admitted to AdventHealth Altamonte Springs Hospital with a gunshot wound to his foot. The man told police that he "was drinking with friends and pretty inebriated when someone started shooting." The man stated that he was unsure of the location of the shooting. He began running with everyone else when he felt the pain and left the area with his friends, returning to his home in Orlando. The man said that he would not cooperate with an investigation and did not want to pursue any charges.

The footage was also shared on Twitter by Sheriff Chitwood, who tweeted from his personal account that "Our country has an ugly history of racism and bigotry, and the chapters are still being written today. Some things to think about following the racial tensions coming out of this weekend's events in DeLand." He also added that "because the majority of the crowd were black & the deputies/police were white, we have to face the issues. I don’t accept the accusations that we're racists, or that our actions Saturday were racially motivated. It’s not true, and it’s not a fair conclusion from the video."

Our country has an ugly history of racism and bigotry, and the chapters are still being written today.

Some things to think about following the racial tensions coming out of this weekend's events in DeLand.