Orlando attorney John Morgan recently offered to file a lawsuit on behalf of the state of Florida, seeking damages to the state and its residents caused by Florida's notoriously unworkable unemployment website.

"Gov. DeSantis, turn me and my team loose, my business trial group loose, and we will recover that money for the state of Florida," said Morgan in a Facebook video he posted on May 5. "You know what I'll charge you to do this? Zero. Nothing. Put every single penny back in your pocket and in the pocket of the unemployed."

Calling it "an offer to the state of Florida and Gov. DeSantis that cannot be refused," Morgan asked DeSantis to let his team attempt to retrieve the $77 million that Scott's administration paid multinational company Deloitte to build the Connect system, which has been deemed the worst in the country.

The system frequently shut down under the explosion of unemployment claims filed since the pandemic closed Florida businesses, and it didn't work even remotely well enough before that.

We wondered, does Gov. Ron DeSantis actually have the authority to put Morgan on the case? If so, who would Morgan sue to recover those tax dollars?

"Gov. DeSantis, turn me and my team loose ... and we will recover that money for the state of Florida," said Morgan. tweet this

According to the Florida Statutes, Morgan can in fact sue on behalf of the state. Title XIX, regarding Procurement of Personal Property and Services, states Florida can contract private firms, but only with prior written approval from the state's attorney general, Ashley Moody.

In his Facebook video, Morgan tells DeSantis to reach out to him via cellphone and suggests getting his number from Florida Senate President José Oliva. There's no word yet on whether the two have spoken, but it would be up to DeSantis to begin the process.

Before accepting Morgan's offer, the governor's office would have to first request the lawsuit be taken up by the state's Department of Legal Affairs, which Moody could then decline due to staffing costs, expertise "or other legal or economic considerations."

Moody would essentially have to issue a statement saying her office's services cannot be provided, or that using a private attorney would be more cost-effective.

We reached out to the communications office of the Attorney General to see if anything has been filed in reference to Morgan's offer of free legal representation. As of May 13, her office had no records filed from Morgan or his team, or from the governor.

It's unclear, then, whether Morgan's lawsuit on behalf of Florida will ever happen, but with the governor's and attorney general's approval it would certainly be possible.

Morgan has posted a Change.org petition to fix Florida's unemployment system, which currently has over 6,300 signatures. No word on whether he would start a class-action suit, as others have. We've reached out to Morgan for comment.

So if Morgan were allowed to sue, who or what would he target? There could be multiple defendants, but one potentially lucrative target could be the company that was contracted to build the site, Deloitte.

"If someone sold you a car that didn't work, what would you do? It's called a lemon," Morgan said of the Deloitte-built system in his May 5 video. "We were sold a lemon."


If Morgan were allowed to sue, who or what would he target? tweet this
Deloitte, which has eight locationsthroughout Florida, including two offices in Lake Mary, defended themselves to WESH, saying, "we built the Connect system to comply with Florida's specific requirements and the state accepted the system."

The company said the Connect system performed well during their contract period, but that they do not know when – or even if – the system has been updated or maintained in the five years since.

This comes after a judge moved to dismiss a lawsuit filed by Floridians still waiting to get their unemployment checks due to the virus on May 6. That lawsuit, filed against the State of Florida, asked the court to force the state to immediately fix the unemployment system and issue users their money quickly.

"We have filed a motion for reconsideration yesterday on that issue," said Attorney Marie Mattox of the Mattox Law Firm. In a seperate lawsuit against Deloitte and the Florida Department of Economic Opportunity, Mattox says she filed an emergency motion for an injunction. The court will review the Mattox motion on Thursday.

Mattox, who is going after Deloitte in a lawsuit similar to Morgan's proposed one, called Morgan's lawsuit a "fantastic idea," however, she said, it wasn't going to do the citizens of Florida who have attempted to use the unemployment system any good.

"It's going to put money back into state commerce, but it's not going to provide immediate relief to anyone," Mattox said.

Morgan and Mattox would both be going after Deloitte, but the outcomes sought by the two attorneys are different for the Floridians still seeking unemployment benefits.

"What Morgan is saying is that he will step into the shoes of the state of Florida and sue Deloitte to get the $77 million dollars back that the state of Florida paid for the system," Mattox said. "What we're attempting to do in our lawsuit is in a negligence claim – breach of fiduciary duty, products liability – is that the people of Florida, the folks that have tried to access the system and have been damaged by that, let's pay them damages in some amount of money for what they've had to go through."

'It's going to put money back into state commerce but it's not going to provide immediate relief to anyone' tweet this
More than 433,000 claimants filed for unemployment in Florida prior to the week ending on May 2, yet the state paid unemployment benefits to just over 429,000 residents the week ending April 25, according to the Bureau of Labor Statistics.

As of May 7, the entire state of Florida had over 1.2 million unique unemployment claims, of which only 829,000 had been processed, and even fewer – just over 494,000 claims – had been paid, according to the Florida Department of Economic Opportunity's dashboard. Now, as of May 21, it shows more than 1.5 million unique claims processed, 1,026,566 total eligible claims processed

In Morgan's May 5 video, he called Florida's unemployment system "broken since day one" and a "ripoff."

"This is the perfect pro bono case for Morgan & Morgan," he told First Coast News on May 7. Morgan said that the money, should he win the case, would go toward helping the unemployed, or to the state to fix the system.

Morgan's media presence and political influence could open doors that other lawyers cannot. For example, he told First Coast he's received tips that, since the beginning of the Connect system, there have been 1,500 change orders requested to fix it.

In Tallahassee, the Mattox Law Firm is having difficulty gaining access to public records about discussions concerning the website from top-level officials. Two weeks after filing the public records requests and having confirmation of their receipt, Mattox attorney Meadows-Keefe said to Ocala.com, "I would say I have nothing that I asked for at this point." 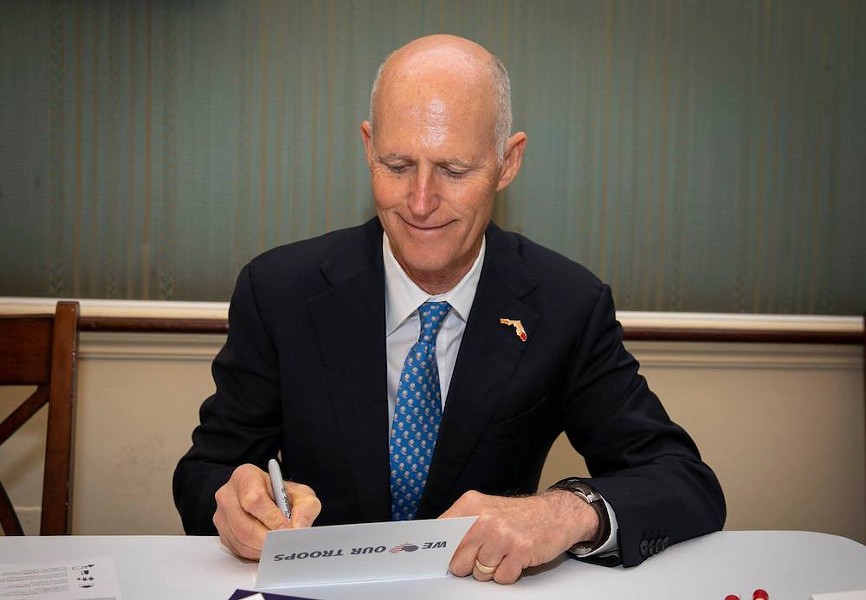 Furthering the frustrations of Floridians seeking unemployment benefits right now, many are being denied eligibility for state benefits when they are in fact eligible. The DEO offers some reasons for a claim to be denied (like making money in another state or the inability to verify an applicant's identity), but says that anyone denied who applied before April 5 can reapply for unemployment benefits again.

In a news conference, the Department of Management Services Secretary, John Satter – who took over the coronavirus unemployment response on April 15, from DEO director Ken Lawson – said, "certainly, if someone is eligible for benefits they are going to receive those benefits. ... No one is going to be out money."

Meanwhile, Florida Sen. Rick Scott, who commissioned and paid for the unemployment system in 2013 during his term as governor of Florida, argues that the unemployment relief package could encourage people not to return to work – especially if it pays them more than they earn in their job.

Scott has yet to comment on the Florida unemployment system that current Gov. DeSantis calls a "jalopy" in a press conference. One of his advisers called it a "shit sandwich" in April.


'If someone sold you a car that didn't work, what would you do? It's called a lemon. We were sold a lemon.' tweet this
At a May 4 press conference, Gov. Ron DeSantis announced the inspector general's office would investigate the contract between the state and the unemployment website creator. That comes after the state spent $110 million to fix the unemployment website and increase call-center capacity.

Orlando's best-known attorney for many reasons, Morgan often uses social media as a vehicle to announce he's putting money behind a cause – and he does often follow through, as with his fights to legalize medicinal and recreational cannabis.

July 2019, he spent $1 million to fight for a higher minimum wage in Florida. During the October 2018 gubernatorial election, Morgan endorsed DeSantis’ Democratic opponent, Andrew Gillum, but then in 2019 threatened to sue Gillum if he ran again.

At the end of his video, Morgan declared, "free legal, for the people," before praising DeSantis' highly criticized efforts in the handling of the unemployment system amid the coronavirus pandemic.

"Gov. DeSantis, I sure am glad I'm not governor, I sure wouldn't want your job," said Morgan in his video. "But I'll tell you what, I think you're doing one hell of a job."