Memorial Day weekend crowds show some hope for the tourism industry that people are beginning to travel again, but the total number of airline passengers is still far lower than in previous years. The resulting loss of revenue will have lasting impacts here, especially at Orlando International Airport.

Air travel is indeed beginning to pick up slightly, with airlines reporting numbers not seen since the pandemic took hold of the global economy, but the days leading up to Memorial Day weekend saw 88 percent fewer travelers than last year, according to TSA data. This weekend was the sixth straight one with passenger growth.

The Greater Orlando Aviation Authority (GOAA), which oversees the international airport (MCO) and the Orlando Executive Airport (ORL) near downtown, is reporting that MCO won't fully recover until between 2022 and 2025, with 2021 passenger numbers expected to be half of the 50 million the airport saw last year.

While the airport has received $170 million in government assistance via the CARES Act, there will still be budgetary concerns for years to come. With this in mind, the airport authority has announced $372 million in proposed cuts to the Capital Improvement Program, including cutting $226 million from the much-needed South Terminal Complex that is already 60 percent complete. 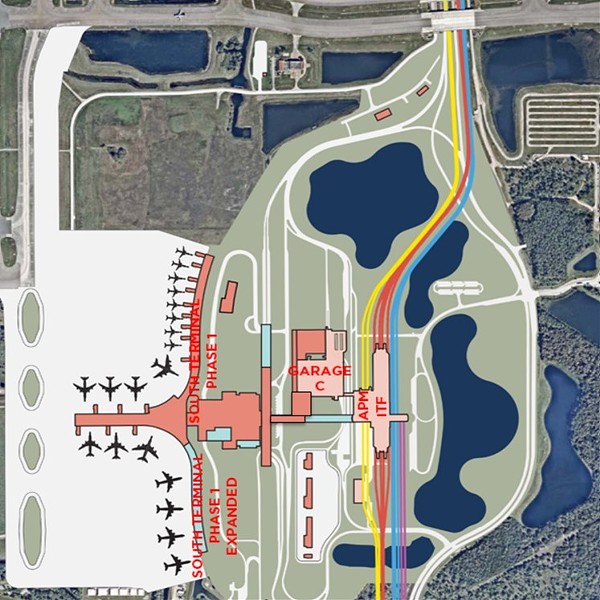 “We are in a very challenging situation. It is our responsibility to balance the interest of airlines, concessions and other business partners with the need for fiscal responsibility and solvency,” explained Aviation Authority CEO Phil Brown in a press release. “It comes down to the management of cash for the sustainability of Orlando International Airport and the preservation of a vital asset for the community’s development and future.”

current MCO has struggled to keep up with demand as Orlando boomed, and Miami International’s capacity woes pushed more flights to Florida's other airports, including Orlando. Now ranked as the 10th busiest airport in the nation, MCO announced the South Terminal in 2015 with 16 gates, but with traffic at the airport steadily increasing by 2018, GOAA green-lit an additional three gates. The 19-gate Phase One of the South Terminal would alleviate the 129-gate hub-and-spoke style current building.

The South Terminal will become a ‘Central Station’ of sorts for Orlando, with an intermodal transit station beside the terminal that will include a train station for the Virgin Trains USA (formerly Brightline, which was previously All Aboard Florida). The move by MCO to rollback investments into its future is perplexing, as officials at the airport acknowledge that the extra gates will be needed within a few years.

Speaking to the Orlando Sentinel, GOAA chairman Domingo Sanchez said he wasn’t supportive of the move, despite other local leaders including Orlando Mayor Buddy Dyer pushing for it. The delay in adding the extra gates will likely result in the airport having to spend more to add the gates later on, even with a predicted slowed rate of inflation, while also creating more inconveniences for travelers due to the extended construction timelines.

The airport authority announced $226 million in proposed cuts to the much-needed South Terminal Complex, already 60 percent complete. click to tweet
The depressed traveler numbers shared by the airport are also questionable, with numerous surveys over the past few weeks showing pent-up demand for travel, especially for domestic trips. This isn’t the first instance in recent history when the travel industry faced predicted hardships, only to bounce back far more quickly than expected. U.S. Travel Association President and CEO Roger Dow explained in a recent release, “the travel industry has exhibited the ability to lead a national economic recovery, bouncing back well ahead of expectations after both 9/11 and the financial crisis of the late 2000s.” Dow acknowledged that the industry is still far from recovering, with more than half of workers in travel industries now unemployed.

Estimates for travel numbers and the related recovery are still far from decisive, with AAA acknowledging that predicting travel volume correctly is particularly tricky. For the first time in 20 years, the Lake Mary-based nonprofit travelers' club opted not to attempt to predict Memorial Day Weekend travel trends.

Despite the clear indication that demand will eventually return, our current state of unpredictability, and a past history showing 2020 is an ideal time to invest in tourism development, MCO could be making an expensive decision now for which it will have to pay later.