Chuck E. Cheese might be trying to hide who they are, but Orlando still owes a lot to this mouse

The pandemic has caused hard times for many restaurants, but few face an existential crisis more extreme than Chuck E. Cheese. The kid-focused restaurant-arcade has had a rocky road since its founding in the late 1970s with a history of backstabbing, questionable health standards, and numerous reinventions. Throughout it all, Orlando has inexplicably become a background character.

In an era when video games were still viewed with suspicion and banned in some cities, Chuck E. Cheese was founded by Atari to introduce a more family-friendly image to the industry. Charles Entertainment Cheese was to be one of many characters that would help the arcade and pizza joint appeal to a younger audience than had been the focus of most arcades at that time.

Inspired by Disneyland’s Country Bear Jamboree, the first location opened in San Jose, California, in 1977. The walk-around characters were designed by some of the same artists who created characters for Disney parks. Atari opened fifty stores within the first year as part of an aggressive campaign against the anti-video game agenda many conservatives were pushing. An Orlando based engineer by the name of Aaron Fechter, who claims to have invented whack-a-mole but at the time was more focused on automotive technology than family entertainment, builds the first animatronics for the restaurant. The busts hang out of picture frames and occasionally chime in, similar to Melvin, Buff, and Max in the Country Bear Jamboree.

After Warner Communications purchased Atari, the company wasn’t interested in the family restaurant chain. It sold it to one of Atari’s founders, Nolan Bushnell, who was blocked from more job prospects due to a noncompete clause in the video game industry. Ironically, just a few years later, Warner Communications would realize that family entertainment centers were a big moneymaker and would attempt various theme park and franchise agreements, including a short stint at owning a chunk of the Six Flags parks. This, along with a park that Warner owned in Illinois, has created a lasting legacy that keeps the coveted Looney Tunes and DC Comics characters out of the non-Six Flags parks, including any in Florida.

Back at Chuck E. Cheese Pizza Time Theater, things were looking up when the world’s largest Holiday Inn franchisee, Robert Brock, agreed to bring the concept to the Midwest. At the same time, Fechter was debuting his newest animatronics, the Wolf Pack 5, at the IAAPA Expo. Now located in Orlando, Florida, IAAPA was and remains the primary place for amusement industry dealings and exhibits. The IAAPA Expo is rumored to be where Brock first met Fechter and where many of the "backroom" dealings that led to some of the darker chapters for CEC took place.

After seeing the Wolf Pack 5, Brock backed out of his deal with Bushnell, who hadn’t told Brock about Fechter or his other creations, to begin a rival robot pizza chain, Showbiz Pizza. Within a year, the Wolf Pack 5 had been replaced by what is viewed as the greatest robotic band ever to grace the stages of a pizza joint, the Rock-afire Explosion.

Soon the Orlando warehouse where the animatronics were built was buzzing with activity. Showbiz Pizza, with its Rock-afire Explosion bands, became a national success seemingly overnight, with annual sales beating those of both Pizza Hut and McDonald's. By 1983, Chuck E. Cheese is losing millions per year filing for bankruptcy the year after. Showbiz is quick to buy out its rival. 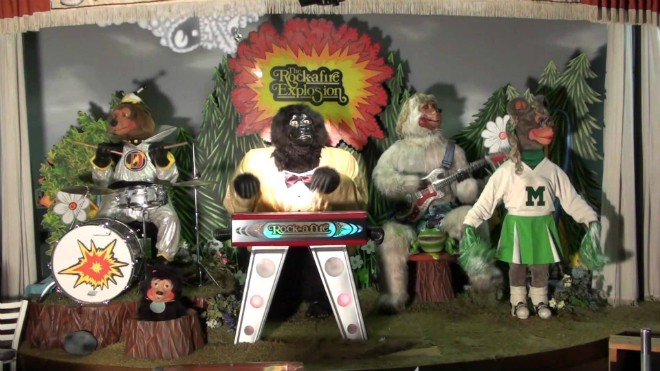 The late 1980s saw Showbiz Pizza enter the pop-culture psyche with movies featuring the chain. The 1989 Ron Howard film Parenthood was filmed at the Altamonte Springs location, though the film also used Mystery Fun House's arcade as well. At the end of the 1980s, the two brands were beginning to merge into one unified image under the new ownership. With it, Fechter’s Rock-afire Explosion was pushed to the side, due in part to issues over the rights of the characters which Fechter’s refused to give to Showbiz, now operating most locations under the Chuck E. Cheese name, (including that Altamonte Springs location).

By 1992, the Rock-afire Explosion had been removed from all Chuck E. Cheese locations, with only a handful of independent restaurants not affiliated with Chuck E. Cheese keeping the bands alive. The remaining unsold animatronics were destined to rot away in an Orlando warehouse.

The 1990s saw massive growth in the play-center business with new competitors like Discovery Zone soon competing against Chuck E. Cheese. In Orlando, McDonald’s even gets in on the act with one franchisee taking his standard McDonald’s and adding the "world’s largest PlayPlace" to it, while the company opened its own chain of similar play centers, Leaps & Bounds.

Disney also wanted a piece of the action, creating a new division at the company, Disney Regional Entertainment. The division will target all age groups with three distinct concepts. Club Disney was the play center concept where large indoor playgrounds, a cafe serving pizza and other kid-friendly snacks, and activity rooms offering more structured activities, such as “Poohrobics” where Winnie the Pooh taught a stretching focused exercise class. For older kids and teens, the division created DisneyQuest; the arcade focused ‘indoor theme park.’ While adults had their own restaurant arcade, ESPN Zone.

Club Disney lasted less than two years and never saw a location open on the east coast, but DisneyQuest opened its first location at WDW’s Downtown Disney, where the NBA Experience is now located. ESPN Zone saw its first location in Baltimore, in a building that previously housed an indoor Six Flags concept (which was partly designed by Disney Imagineers). At Disney World’s Boardwalk Resort, the ESPN Club is a nearly identical concept to the ESPN Zone, though with a slightly more family-friendly feel.

The 2000s saw Fechter, who by then had become mostly forgotten about outside of the amusement industry, meeting his future wife in a Rock-afire Explosion chat room. Then in the late-2000s, the Rock-afire Explosion saw a second renaissance with a growing fan base thanks to its unique YouTube music videos and a 2008 documentary. 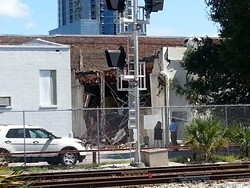 But in 2013, the Orlando warehouse housing many of the Rock-afire Explosion pieces explodes damaging some of the historical artifacts. Now Five Nights at Freddy’s themed birthday parties take place at the remodeled Orlando warehouse, and Fechter still debuts new concepts nearly every year at the IAAPA Expo, where many fans excitedly meet him.

By 2012, things over at Chuck E. Cheese were looking rough, with sales declining. Chuck E. Cheese has what looks like a midlife crisis, changing species, moving from a rat to a mouse, and taking on a more rock star like persona. Apollo Global Management swooped in and bought the chain in 2014, putting one of their own in as director. They looked to one of their partners, Scott Ross, who the year before had helped the company with their acquisition of Great Wolf Lodge. Ross was soon serving as the Director of Chuck E. Cheese and Great Wolf Lodge. But with compensation changes at Apollo, Ross bailed on the firm just months later, creating his own firm, Hill Path Capital. That firm has two main assets, restaurant-arcade concept Dave & Busters, and Orlando-based SeaWorld Entertainment. Hill Path Capital is SeaWorld’s largest shareholder, and Ross serves as the Chairman on the board of directors for the company.

With concerns over how clean an arcade marketed to kids can ever really be and with many now angry with Chuck E. Cheese over its questionable online marketing, the future of the chain is uncertain. Still, there’s no question that no matter what happens, its’ impact on the amusement industry and Orlando will last well beyond these current troubles.