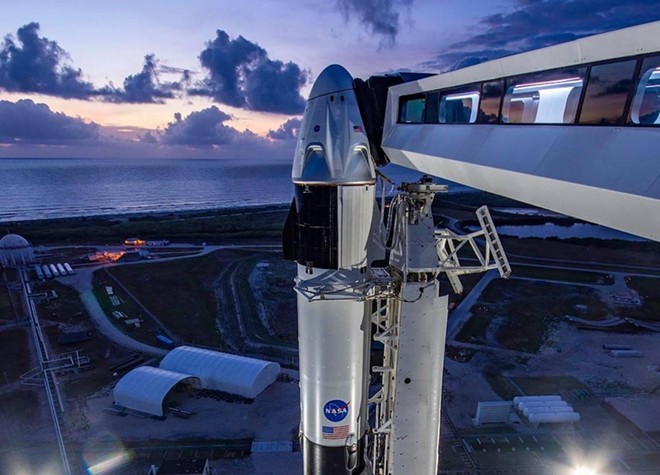 Updated, 4:16 p.m. | Due to poor weather conditions, the Falcon 9 launch planned for Wednesday has been scrubbed, delayed with just over 16 minutes left on the countdown clock. A new launch is planned on Saturday at 3:22 p.m.

SpaceX is teaming up with NASA to launch a new spacecraft from Cape Canaveral Wednesday. The historic launch, marking the first time in nine years that American astronauts have been launched in an American rocket on American soil, is set for this afternoon at 4:33 p.m.

Launching Wednesday, the new Falcon 9 was made by the company founded by tech billionaire Elon Musk, who also founded Hyperloop, the Boring Company and electric car company Tesla, among others.

"It takes a lot of confidence and audacity to pull off a human spaceflight mission but you also need to be a little bit paranoid that things can get complicated." tweet this
Today's mission will launch two experienced astronauts, Bob Behnken and Doug Hurley, into space from the Kennedy Space Center to the International Space Station, where they will stay anywhere from six to 16 weeks before returning.

"It takes a lot of confidence and audacity to pull off a human spaceflight mission, but you also need to be a little bit paranoid that things can get complicated," Behnken said during a news conference last week.

Complications like weather are where things can get tricky for the flight. NASA is monitoring the weather, with reports of a 50 percent chance of stormy weather that could hold the launch off until Saturday, May 30, for safer liftoff conditions.

President Donald Trump and Vice President Mike Pence will be in attendance among many families watching on site and from their homes across the country. Pence and Trump will meet both astronauts' families and tour the launch facilities before viewing the liftoff this afternoon.

Vice President Mike Pence has been active on Twitter all morning, asking citizens to pray for the astronauts as well as the NASA and SpaceX teams that have been working hard on this $3 billion dollar project for six years.

Let’s pray for a safe and successful mission, that as these Heroic Astronauts “rise on the wings of the dawn...go up to the heavens,” that there “His hand will guide” them and “His right hand will hold” them fast. GodSpeed @AstroBehnken & @Astro_Doug! 🇺🇸

Florida's Space Coast Office of Tourism and Brevard County Emergency Management are urging the public to stay home for the launch and watch livestreams, instead of standing close to fellow viewers and risking further spread of the novel coronavirus.

By using apps like Launch Console or social media channels for Florida's Space Coast, NASA or Kennedy Space Center, the options for livestreaming the event from the comfort of your house are recommended.  You can watch the NASA live feed at the bottom of this post.

If you have already decided to watch the historic launch with your own eyes, Brevard County and the Space Coast Office of Tourism recommend that you prepare for an all-day event and expect traffic to be heavy hours before and after the launch. Prepare with food, a full tank of gas, water and medications; you may be standing in traffic for a while.

Parking on any causeway or highway shoulder is not permitted. Viewers can stay up to date on traffic conditions by texting "BrevardEOC" to 888-777 or follow Brevard County Emergency Management on Facebook and Twitter.

With good luck and good weather, Musk might again celebrate with a beer, as he did at Port Canaveral's Fishlips Waterfront Bar & Grill in 2018, after launching his historic Falcon Heavy rocket.
_
Please follow CDC guidelines and Orange County advisories to stay safe, and please support this free publication. Our small but mighty team is working tirelessly to bring you news on how coronavirus is affecting Central Florida. Please consider making a one-time or monthly donation. Every little bit helps.