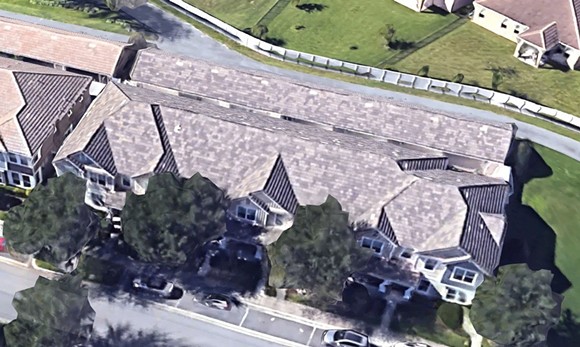 Updated, 1:45 p.m. | Derek Chauvin has been arrested in Minnesota, in connection with George Floyd's death.
–

Derek Chauvin, the now-former Minneapolis police officer who was seen kneeling on George Floyd's neck before he died on Monday, owns a home in Windermere, and local Twitter users have pinpointed the address.

Protesters have been surrounding Chauvin's home since late Thursday night and into early Friday morning. The Orlando Sentinel reported there were an estimated 50 protesters honking horns and yelling on Thursday night until about 3:30 a.m., and on Friday at 10 a.m., approximately 10 protesters peacefully held signs.

The Orange County Sheriff's Office tweeted that Chauvin, the homeowner since 2011, is not currently at the Windermere home.

For the safety of our community, we have verified that the Minneapolis Police Department officer with a home in Windermere in unincorporated Orange County is not at that home, and has no plans to be in the area. #GeorgeFloyd pic.twitter.com/csmsugRgqy

Earlier in the morning, before the sheriff's office tweet, Jennifer Vargas, an Orlando filmmaker who lives near Chauvin's home, tweeted a request to "please do not bring violence to our neighborhoods."

Seeing Windermere (Florida) as a trending topic concerns me greatly. Many people I care about live close to this area. I do too. I am as appalled and angry about the death of #GeorgeFloyd as everyone else. I beg you:

PLEASE DO NOT BRING VIOLENCE TO OUR NEIGHBORHOODS.

Vargas' tweets angered some on social media who said her message was "privileged," and that anger should be reserved for Chauvin and not those protesting.

In a press conference Thursday in Minnesota, Hennepin County Attorney Mike Freeman said "there is other evidence that doesn't support a criminal charge," regarding Chauvin. In a news release from later that same day on Thursday, Freeman's office said his statement was taken out of context and clarified that he meant the attorneys had to consider all evidence, even some that may be in favor of Chauvin.

Since Thursday's press conference, protesters have set buildings on fire in Minneapolis, and a CNN reporter was arrested and later released with an apology. Overnight, a third police station was set aflame.

President Trump has since joined the outrage on Twitter, writing that the "THUGS" are dishonoring the memory of Floyd and "when the looting starts, the shooting start." The tweet has been flagged as it violates Twitter's rules about glorifying violence, but will remain up in the public interest.


Trump later tweeted that "George Floyd would not have died in vain" and to "respect his memory," though he also retweeted daughter-in-law Lara Trump's tweet that protesters who are looting are not protesting.

Trump has signed an executive order targeting social media on Thursday after one of Trump's tweets was fact-checked by the social media giant and labeled as misleading.

Trump has said his executive order is to protect free speech but legal experts are not sure if the order is constitutional or not.