In an interview on NASA's "Launch America" approximately 18 minutes after the launch of the SpaceX Falcon 9 rocket, NASA Administrator Jim Bridenstine said he watched the launch with President Donald Trump and Vice President Mike Pence, and that Trump's attendance at Wednesday's earlier launch attempt was "a big risk."

"To be clear," said Bridenstine, "I think he's the only sitting president to watch American astronauts launch on a brand-new rocket that has never launched before, and that's a big risk, you know." 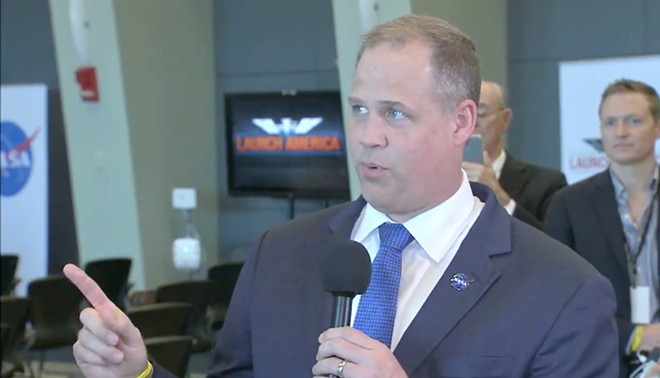 When Nail asked Bridenstine what was it like watching the launch with the president, and how Trump reacted, Bridenstine said, "it's obviously something that is near and dear to him."

"He said it a year and a half ago, he put it in the state of the union speech," said Bridenstine. "He said 'we're going to launch American astronauts on an American rocket from American soil,' and of course I was like, in my head, I'm thinking, 'we better get after this.'"

"He's the only sitting president to watch American astronauts launch on a brand-new rocket that has never launched before, and that's a big risk, you know." tweet this
Trump, founding president of the U.S. Space Force, had intended to deliver remarks following the scheduled Wednesday launch, which coincided with the date of U.S. reaching a grim milestone of 100,000 Americans dead from the coronavirus.

Trump brought most of his family with him to Cape Canaveral on Wednesday, including first lady Melania Trump, daughter Ivanka Trump and son-in-law Jared Kushner, as well as son Donald Trump Jr. and his girlfriend, Kimberly Guilfoyle, other son Eric and Lara Trump, and several grandchildren. After the launch was delayed Wednesday, the first family quickly boarded Air Force One to return to Washington D.C.

On Saturday, Trump once again schlepped out to the Cape, this time bringing only Melania, Vice President Pence and second lady Karen Pence. There were no announced remarks scheduled after the launch. As of an hour following the launch of the Falcon 9, the president has so far remained uncharacteristically silent on Twitter.
_
Please follow CDC guidelines and Orange County advisories to stay safe, and please support this free publication. Our small but mighty team is working tirelessly to bring you news on how coronavirus is affecting Central Florida. Please consider making a one-time or monthly donation. Every little bit helps.