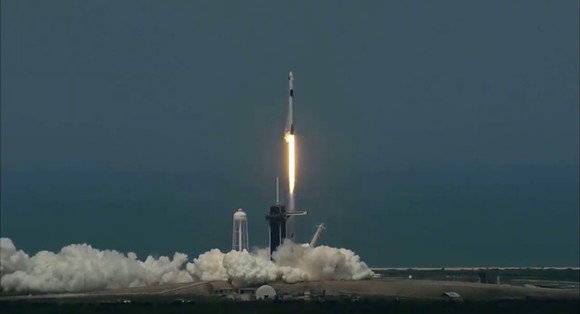 SpaceX and NASA successfully launched the new Falcon 9 spacecraft from Cape Canaveral on Saturday, shortly after 3:22 p.m. The historic launch marks the first time in nine years that American astronauts have been launched in an American rocket on American soil.

Due to poor weather conditions on Wednesday, the originally scheduled launch had been scrubbed and rescheduled to Saturday afternoon. Despite some weather concerns Saturday, the final count proceeded uninterrupted before the instantaneous launch.

The two-stage ride up to orbit takes approximately nine minutes, until the spacecraft begins coasting and rotating, before physically separating from the Falcon vehicle. A total ride of 19 hours awaits astronauts Col. Doug Hurley and Bob Behnken before they reach the International Space Station.

It's only the fifth time in American history that astronauts have travelled to space inside a new spacecraft, and the very first time that American astronauts have flown in a commercially built spacecraft.
_
Please follow CDC guidelines and Orange County advisories to stay safe, and please support this free publication. Our small but mighty team is working tirelessly to bring you news on how coronavirus is affecting Central Florida. Please consider making a one-time or monthly donation. Every little bit helps.