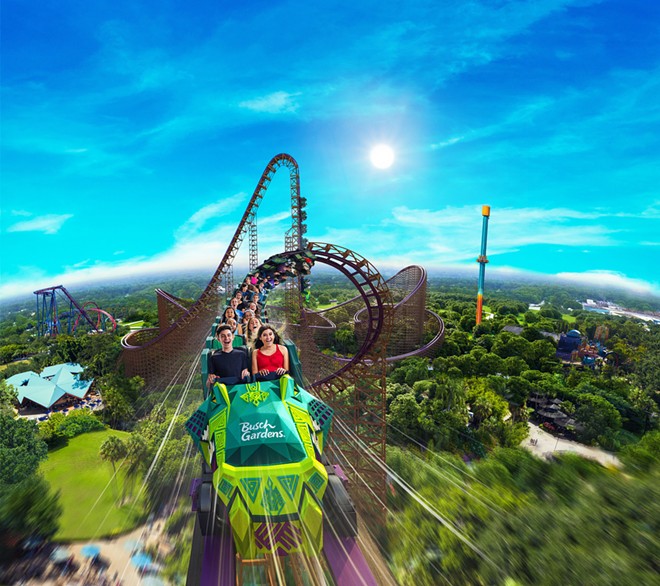 By this point, everyone knows that things won't be the same once Central Florida's theme parks reopen, but it isn't all bad. Multiple parks are scheduled to open new attractions in the coming months.

Busch Gardens Tampa's newest attraction, Iron Gwazi, is likely the readiest, expected to open when (or not long after) the park itself reopens. The highly anticipated re-imagining of the former Gwazi wooden coaster by Rocky Mountain Construction replaces the dueling model with a single hybrid coaster that breaks multiple records.

This will be the ninth coaster for the Busch Gardens (not including the kid-focused Air Grover) and, despite the park being closed, is already advertised on billboards statewide as "now open." Testing began on the new coaster in early March, just prior to local park closures. It's expected that Iron Gwazi will open in mid- to late July, about a month after Busch Gardens' reopening, which is now scheduled for June 11.

SeaWorld Orlando, the sister park to Busch Gardens Tampa, is scheduled to reopen on the same date. Like every other major park in the SeaWorld company, it was expected to receive a major new ride this year, called the Ice Breaker. The family thrill coaster was slated to open this summer but now is rumored to have been pushed back until the park can better accommodate larger crowds, with a new opening date possibly not until this winter or upcoming spring. The bright orange coaster will use a back-and-forth multi-launch system similar to Busch Gardens Tampa's Tigris, with both being from the same manufacturer. Unlike Tigris, Ice Breaker will have the launch outside of the station, thanks to a switch track that allows for launches while other trains are in the station. After four launches, riders will coast over the top of an eight-story-tall hill, before racing through the rest of the track at speeds of over 50 mph. With an expected ride time of less than a minute and a half, the new attraction won't be the record-setting coaster that Iron Gwazi is. Still, it adds another custom coaster to the SeaWorld Orlando's lineup, in a fairly quiet section of the park.

An even more substantial new coaster is rumored to be in the works at SeaWorld, with an anticipated opening date in late 2021 or early 2022, though it's unclear how those plans may change, as a result of the pandemic.

At Epcot, the new Ratatouille-themed dark ride in the France pavilion was to open this summer. The new attraction is a near replica of a ride at Disney Studios Park in Paris. In preparation for its opening, Disney was to have a small number of Cast Members from Paris over to visit WDW and assist in training. The current travel bans have canceled those plans.

Also, with limited capacity at the parks, it isn't the ideal time to open a new attraction. Instead, Disney is rumored to be looking now at pushing back the grand opening until fall at the earliest. This would allow for more training while discouraging large gatherings in the parks. Construction of the France pavilion expansion where the new attraction will be located is nearly complete, and should wrap in the coming weeks.

Two other new coasters are expected to open at WDW next year, one at Epcot and one at the Magic Kingdom. Both are well underway and shouldn't be too delayed due to the current closures, though an opening for those attractions may now be pushed back to later in the year. 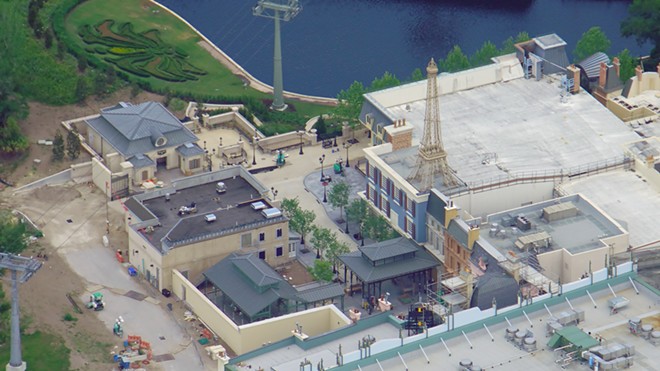 Universal Studios Florida was to see a new Jason Bourne-themed stunt show open this summer. The remodeling of the former "T2-3D" theater has been completed, and the cast was well into dress rehearsals before the parks closed. A preview of the new show, "The Bourne Stuntacular," was promoted on NBC's Today show in late February. At this time, it's unknown when indoor live performances of this nature will be approved to reopen.

A multi-launch, high thrills coaster is now under construction in the Jurassic Park area of Islands of Adventure. The yet to be announced new attraction is expected to open sometime early next year.

For many parks, the pandemic came after most of the 2020 additions were well underway. This means those additions will still happen, but with uncertainty now the dominant theme of the next few years, the projects slated for 2021 and 2022 are likely to be scaled down, shelved, and outright canceled. Parks are still uncertain of when they can go back operating at full capacity and even more unsure of when the public will once again feel comfortable traveling. Until both of those are a certainty, most parks will remain hesitant to green-light any significant new investments.