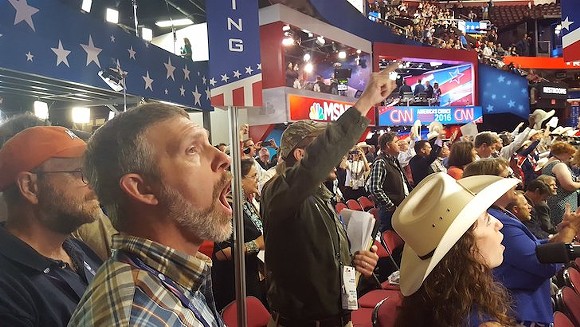 Did you think that this summer couldn't get any worse? Well, buckle up, because President Trump took to Twitter Tuesday night to declare that he's moving August's Republican National Convention out of Charlotte, North Carolina, and Republican sources have told CNN that Orlando is one of the cities in the mix as a Plan B.

Now, of course, this could all change by the afternoon (as Trump's policy-setting-by-tweet often fizzles), but as of 9:06 p.m. last night, Trump unilaterally pulled the Republican National Convention out of Charlotte because North Carolina Gov. Roy Cooper wouldn't comply with his demands to pack the Spectrum Arena with the MAGA faithful because of the ongoing pandemic.

CNBC reported on Tuesday that talks between the RNC and Gov. Cooper over North Carolina hosting a full-on convention had finally broken down, with Cooper stating in a letter to Republican officials that it was "very unlikely" that Charlotte would be the host city.

Cooper was firm in his denial:

“As much as we want the conditions surrounding COVID-19 to be favorable enough for you to hold the Convention you describe in late August, it is very unlikely. Neither public health officials nor I will risk the health and safety of North Carolinians by providing the guarantee you seek.”

Unnamed Republican sources told CNN that RNC officials are considering  "Nashville, Las Vegas, Orlando, Jacksonville and venues in Georgia" as replacement destinations. And Gov. DeSantis has been heavily campaigning for Florida to host the nominating convention.

Orlando bands, now is the time start working out your covers of "Kick out the Jams."