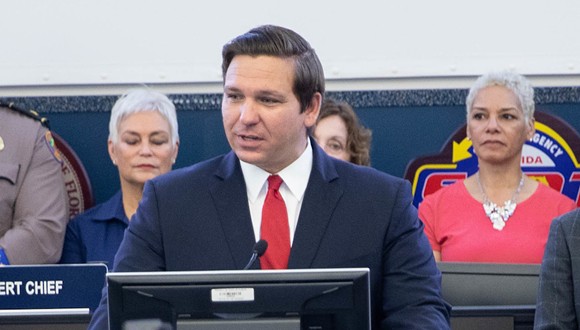 Florida counties are pushing Gov. Ron DeSantis to release nearly $1.3 billion in federal money that has been sitting in state coffers for more than two months, as local officials struggle to keep their communities afloat during the COVID-19 pandemic.

But the other money – $1.275 billion – remains unspent, as counties increase pressure on the Republican governor to distribute funds to rural areas that have suffered since DeSantis and local officials shut down most businesses in March to prevent the spread of COVID-19.

In recent days, counties have amped up their campaign to get DeSantis to release the funds, even as a disagreement appears to have died down over whether the federal act requires states to hand over the money to local governments.

Counties and cities have been “drastically hurt” due to the COVID-19 epidemic, Florida Association of Counties spokeswoman Cragin Mosteller told The News Service of Florida in a telephone interview.

“The CARES Act is an opportunity for these counties and cities to have additional resources that are needed in a global pandemic. So it is right to make sure they have those resources. It should not become a battle between governments. This is the federal government stepping in to make sure the citizens are cared for. And the state is holding onto that, rather than making sure that those funds go to our communities so they can take care of our citizens,” Mosteller said.

But a DeSantis administration official told the News Service on Wednesday that “everyone’s been trying to get this money out as quickly as possible.”

The state wants to ensure that the funds are going to be properly distributed and used, said the official, who agreed to an interview on the condition of not being identified.

“Anything that a city or a county misuses these funds on … we are responsible for repaying it to the federal government,” the official said. “That’s been the biggest concern that we’ve had, to make sure we get it right.”

There also “initially was a lot of confusion” about what the money could be used for, the official said.

Following the passage of the CARES Act, the Treasury Department issued several sets of guidelines to help state and local officials figure out how the funds could be spent and distributed.

The federal law allows state and local governments to make payments for programs that “are necessary expenditures incurred” because of the public health emergency, “were not accounted for in the budget most recently approved as of the date of the enactment” of the act on March 27 and were incurred between March 1 and December 30, 2020.

Guidelines issued by the Treasury Department on April 22 also said the money could be used for “second-order effects” of the pandemic, “such as by providing economic support to those suffering from employment or business interruptions due to COVID-19-related business closures.”

The federal agency’s latest guidelines, issued last week, resolved many of the questions DeSantis administration had about the program, according to the official.

Okeechobee County Commissioner Terry Burroughs said his community wants to use the funds to issue $5,000 to $10,000 grants to local businesses that have suffered financial losses after being shuttered for more than two months. Such a program would mirror grants offered by some large counties that received the stimulus money directly from the federal government, Burroughs said.

“Our biggest issue is trying to get our businesses up and running,” Burroughs said in a telephone interview this week.

Many businesses in Okeechobee County, which has a population of about 41,000, derive their annual income from the December-to-May tourist season, when visitors come to the lake area to fish, the commissioner said.

The grants would be available to county-based businesses that have a maximum of 25 employees, Burroughs said.

“We want to make sure they have a brick-and-mortar in Okeechobee County,” he added.

As the governor begins to reopen the state, the Florida Association of Counties and the Small County Coalition, comprised of 39 largely rural counties, continue to push DeSantis to release the money.

“People are hurting. There are needs now,” lobbyist Chris Doolin, who represents the Small County Coalition, told the News Service on Wednesday. Twenty-nine of the counties in the coalition are considered “fiscally constrained,” based on the amount of money generated by local property taxes.

The small counties are frustrated that neighboring large counties received the federal money more than 60 days ago, while “their economies are being totally decimated,” said Doolin, who regularly issues updates that include a countdown of the number of days since the state received the CARES funds.

Other states, including Missouri, Massachusetts and Kentucky, have released CARES money to local officials.

Senate Appropriations Chairman Rob Bradley, a Fleming Island Republican whose district includes a large swath of rural North Florida, said this week he understands that “everyone is understandably eager and anxious to spend” the federal funds.

Bradley urged local governments to “document and submit” their records to receive Federal Emergency Management Agency reimbursements, which are separate from the $1.275 billion cities and counties are trying to receive.

“I join with local governments who are seeking to be made whole financially and whose residents are counting down the days until we can fully return to the quality of life that has made our state the envy of the world. In my view, the situation is still evolving, and additional data and information is needed for state government to make responsible decisions regarding such significant levels of funding,” he said.