UCF students unite in the wake of racist tweets from professor

Following racist tweets from University of Central Florida psychology professor Charles Negy, UCF tweeted that they are "aware of Charles Negy’s recent personal Twitter posts, which are completely counter to UCF’s values," and will be reviewing the incident while "being mindful of the First Amendment." In the midst of protests against police brutality throughout the country, Negy shared racist ideologies on Twitter, spurring a Twitter campaign, #UCFfirehim.

On May 29, Negy shared an article along with a tweet stating, "it's not like black people have any agency of their own, to stay in school, be the best student, abstain from crime, gangs, unwanted pregnancies, etc." The article shared was an opinion piece arguing that Blacks are protesting because the government is failing them. Many of the comments on the post disapproved of Negy's comments, and one response from reads, "Have fun getting fired you racist fool."

However, Negy's comments did not stop there. On June 1, he called out Billie Eilish, who posted a picture on Instagram along with a caption calling out those who stated "All Lives Matter" on Twitter. His tweet stated, "Maybe there's a lot of racism against Whites in this country (and it doesn't matter if some comes from self-loathing Whites)."

Additionally, on June 2, Negy replied to a tweet by Larry Elder, which asked if a "vaccine against white racism" were created, "Would 70% of black kids STILL be raised in fatherless homes? Would 50% of blacks STILL dropout of many urban high schools? Would 25% of young black urban men STILL have criminal records? Would blacks STILL kill 7K blacks every yr.?"

Negy replied, "People who think 'whites are the problem' would find if whites suddenly disappeared from earth, most social/academic problems experienced by some/many Blacks and Hispanics would still exist. They're confused about the causes of their problems." A comment on that tweet reads: "HOW IS THIS MAN ALLOWED TO BE A PROFESSOR JESUS CHRIST @UCF" 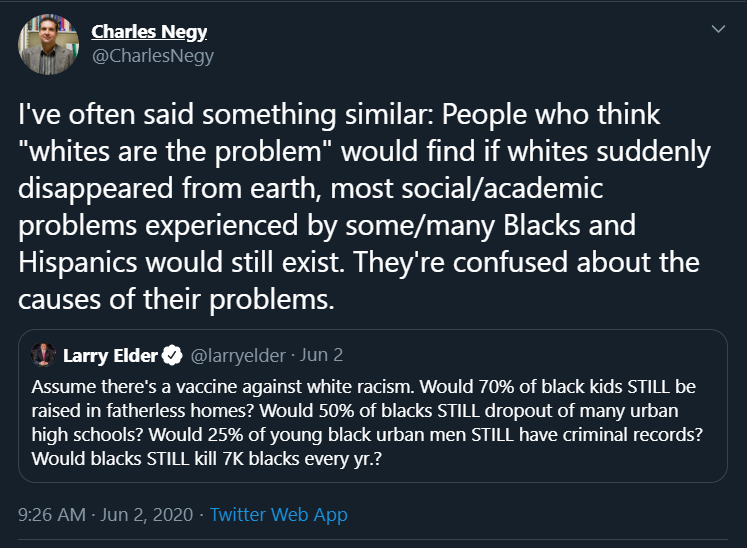 Negy's final tweets were on June 3, where he referenced an article and  stated that "Black privilege is real: Besides affirm. action, special scholarships and other set asides, being shielded from legitimate criticism is a privilege. But as a group, they're missing out on much needed feedback." He also tweeted that he was excited for the new Uncle Tom movie coming out June 19 (yes, it's a real thing).

UCF's June 4 tweet stating that the situation with Negy would be reviewed was met with nearly 2,000 likes and several angry responses from students and Orlando residents. An alumnus replied to the tweet saying, "The 1st Amendment does not guarantee a platform. The 1st Amendment means the police or feds can't jail you for your beliefs. It is not counter to the 1st Amendment to fire a professor who clearly can't teach black students without prejudice. Sincerely, a UCF '08 journalism graduate." Another response from a student reads, "Among the many racist comments he’s thrown up on Twitter, please also consider the fact that he required students to read his unpublished manuscript in class (WHITE SHAMING) & write essays on it. Students should not be his unpaid editorial service."

Negy is the author of the book White Shaming: Bullying Based on Prejudice Virtue-signaling and Ignorance, which argues that "Whites often are expected to 'shut up,' own their presumed racism, and feel guilty for the wrongdoings of others who simply belonged to their racial group." Negy's research focuses on population variables such as race, ethnicity, culture, acculturation, gender, social class and sexual orientation and how such variables influence people’s attitudes, behaviors and performance on personality tests. He was also the recipient of the "Teaching Incentive Program" award in 2008 to 2009.

UCF held a Student Virtual Forum from 2:30 to 4 p.m. on June 4 regarding "ideas about returning to campus." Negy's Twitter comments were briefly referenced in the beginning of the forum. UCF President Alexander Cartwright stated in the forum that "we are acutely aware of the offensive and hurtful Twitter posts that Professor Charles Negy has shared on his personal page. I want to thank those of you who have brought them to our attention, using your voices to speak out. ... These posts do no reflect the values of UCF and I strongly condemn these racist and abhorrent posts. ... We have launched an inquiry to quickly, but fully evaluate the situation."