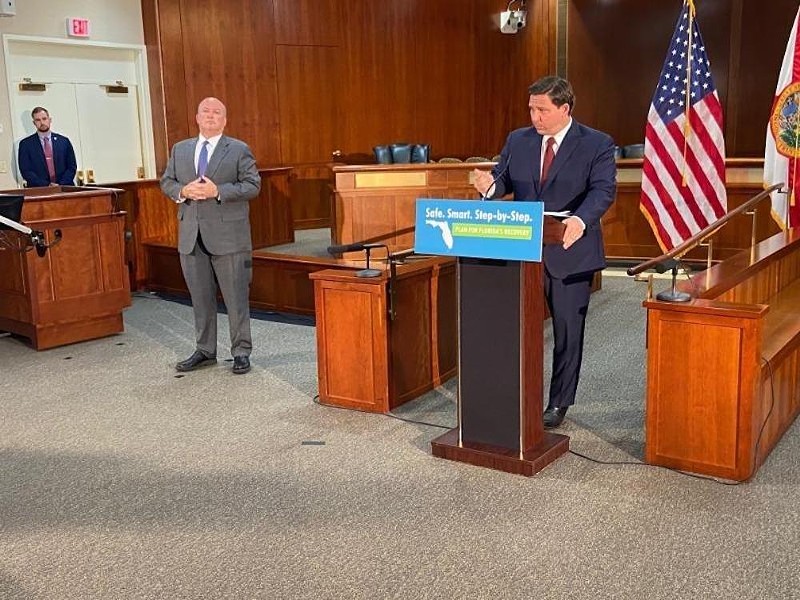 Florida is upping its game to become home field for the Republican National Convention.

Jacksonville Mayor Lenny Curry quickly had his hand up, saying his city wants to host the convention, which is apparently crashing out of Charlotte because North Carolina Gov. Roy Cooper won’t give assurances that coronavirus physical-distancing rules will be lifted for the late August showcase.

Gov. Ron DeSantis remains all-in for bringing the event to Florida, whether it be to Jacksonville, Orlando or Miami-Dade County.

“So, this is almost three months out, I think that we probably are going to be able to pull it off,” DeSantis said Wednesday while in Orlando.

Unlike Cooper, DeSantis said the convention could be planned for a fully open event. Still, DeSantis didn’t give a 100 percent assurance, noting that if the coronavirus flares, changes could be made.

“On all these things, particularly as you look months in advance, my view would be we should assume we're going to be doing those, welcome this stuff,” DeSantis said. “And then as we get closer, if you need to call an audible, you can always call an audible.”

DeSantis said Orlando would be a good fit “just because of the hotel capacity.” click to tweet
President Donald Trump tweeted Tuesday night that the GOP is “now forced to seek another state” because Cooper, a Democrat, was “not allowing us to occupy the arena as originally anticipated and promised.”

Florida, which this week topped 2,500 deaths from the virus, is in a more aggressive reopening mode.

Curry was emphatic in promoting Northeast Florida as being “open for business.”

“We welcome the opportunity to host the @GOPconvention in Jacksonville,” Curry tweeted Tuesday. “A $100 million local impact event would be important for our city as an event/convention destination. The City is ready for world class events & ready show the world we are open for business.”

Orlando, along with Dallas, Phoenix, Nashville, and Las Vegas are reportedly under consideration to scramble to put on the event, which is expected to attract 19,000 delegates, along with staff members, elected officials and reporters. The convention is scheduled from Aug. 24 to Aug. 27.

DeSantis said Orlando would be a good fit “just because of the hotel capacity.”

Most of the reaction on social media to Curry was, as is the case with social media, negative.

“This would be a horrific thing to bring to our city,” one commenter replied to Curry. “As divided and broken as Jacksonville is, the tension and riots would devastate us.”

DeSantis reiterated Wednesday that he is also open to hosting the Democratic convention, even though no overtures have been made about moving that event from Milwaukee.

“If (presumptive Democratic presidential nominee Joe) Biden called me and said they want to do them here, I would support that, because I think the impact to the community, I think, from an economic perspective, would be positive,” DeSantis said.

BRING US YOUR PROS

No matter the crisis, superfan DeSantis keeps pushing Florida to “roll out the red carpet” for the return of professional sports.

While handling the coronavirus and its massive health-care and economic fallout, DeSantis, a former college baseball player, has taken time to keep in contact with leaders of major sports that have been sidelined since March because of the virus.

On Tuesday, a day before it was reported the National Basketball Association planned to use Walt Disney World Resort in Orlando for a 22-team format to restart the season, the governor was on the phone with NBA Deputy Commissioner Mark Tatum.

DeSantis said Wednesday he couldn’t discuss what they talked about, before adding, “Let's just say this, that I'm all in from the state's perspective. I don't think you can find a better place than Orlando to do this. I think it's very exciting.”

“They raised $20 million. This is for people playing golf. Charity. They got 6 million TV viewers for this,” DeSantis said Wednesday. “So, I think people are hungry for this. And I think the first sport back, if it is the NBA, I think that they're going to be able to bring more and more fans into the fold. And I think, here in Orlando, I think it would be a great place to do it.”

DeSantis, in calling Orlando the potential “epicenter of the comeback of professional sports,” said he’s told the same thing to Major League Baseball. However, that maybe a tougher sell as owners and players continue to lock horns over issues such as revenue sharing and the length of a season.

“We've told baseball, Florida wants to be a part,” DeSantis said. “I don't know how you're going to do it. But we would love to be a part of the solution to be able to get that sport going again.”

TWEET OF THE WEEK: “White House press secretary says video of protester embracing a Florida State Trooper is not being shown in the media. The video was shot exclusively by @WPLGLocal10 and has aired numerous times in our newscasts.” —- Parker Branton (@ParkerWPLG), a reporter for WPLG in Miami.