The owner of Swan City Bagels has closed her business due to backlash over comments she posted on her Twitter feed.

"The decision was based on a combination of factors but it was mostly because of my past social media," says Racine Richman, Swan City Bagels owner. "My old personal Twitter was filled with awful, crude and inappropriate jokes, and obnoxious, insensitive tweets, retweets and trolling between 2012-2018."

Richman opened the bagel shop inside Eola General, a local market and café serving food and drink from different companies, in July 2019.

The tweets in question range over topics from hate and homelessness to religion and politics. In 2015, Richman tweeted, "If you don't want to be homeless don't do drugs! Duh" and "Why are people shocked when drug addicts die." In 2016, she tweeted, "I only have Twitter so I can follow @realdonaldtrump." In another tweet from July 2013, Richman uses the N-word to refer to a friend.

Richman has since deleted her Facebook and Twitter accounts and taken down her business website. She says the tweets are something she deeply regrets and that she has grown over the years.

"I’ve never tweeted anything intended to be racist or homophobic, and would never try to hurt anyone, but I see now that those divisive posts have," Richman said. "During the years since those tweets, I have grown and would never speak like that now. The internet should be used for positivity, not divisiveness or crude tweets. It’s important to show remorse."


A commenter who claims to be a former employee of Swan City Bagels alleges that Richman gave non-vegan options to those requesting vegan options. Richman denies this.

Prior to posting the statement apologizing for her past tweets, Richman posted a black square in support of the Black Lives Matter movement to Instagram but later deleted the post. 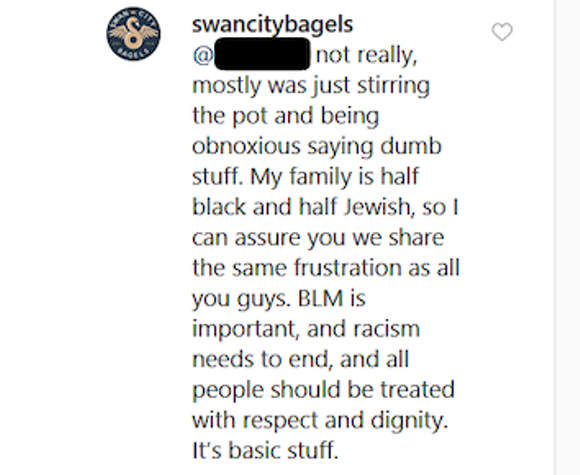 Eola General issued a statement Wednesday addressing the situation and has cut ties with Swan City Bagels. The shop has changed their procedure for background checks prior to hiring and plans to replace Swan City Bagels soon with pop-ups and other local products.

Eola General has already painted over the mural, a logo made specifically for Swan City Bagels in their store, and plan to have a new mural by a local artist soon.

In her Yelp biography, Richman, who was born in New York but raised in Florida, says she graduated with a bachelor's degree in culinary arts from Johnson & Wales University and hopes to make a positive impact on her community.

"Anything I can do to stop the hurt my thoughtless posts made, I just want to help Orlando heal and not be a distraction during this epic moment in civil rights history," Richman says. "There are people out fighting for equality, much-needed policy changes, and fighting to make this country better for all of us."

"The last thing anyone needs is to have that progress derailed by me."