Late Saturday night, a vile, racist and purposely inflammatory post appeared on the Brevard County Fraternal Order of Police's official Facebook page. The tweet called out to the so-called Buffalo 57 – 57 police officers in Buffalo who resigned after two of their fellows were suspending for pushing a man in his 70s to the ground – and the Atlanta 6 – six police officers who were brought up on charges of excessive force – all but inviting them to send their résumés to Brevard County.

After promises of "lower taxes, no spineless leaders, or dumb mayors" it ended on an especially sinister note of "Plus … we got your back!"

Then there was this post the same night, inviting Minneapolis police to relocate to Brevard with a similarly nauseating tone: 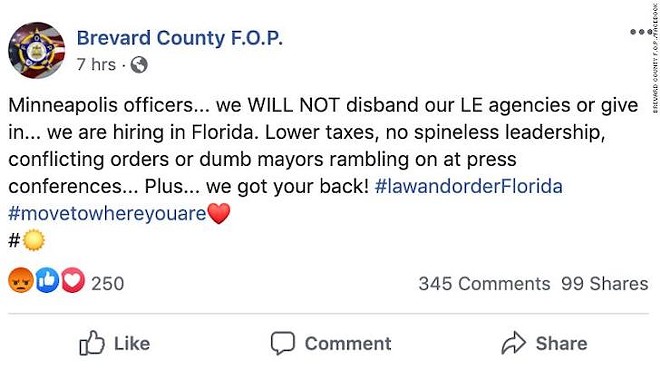 These posts set off a justified firestorm in Central Florida and captured the attention of national news outlets like CNN, a signal that even after a weekend of successful anti-policy brutality, anti-racism and Black Lives Matter protests, there is still so much work to be done.

The two Facebook posts were deleted, and as of this writing the Brevard F.O.P. Facebook has been taken down, but screenshots circulated on social media and outrage grew, with no official action taken.

Around noon on Monday, Brevard Police lieutenant Bert Gamin, president of F.O.P. Lodge #37, claimed responsibility to Florida Today for the posts without a hint of remorse and further made the unbelievable claim that these officers were all within their rights with their use of excessive force.

Brevard Sheriff Wayne Ivey first issued a lukewarm statement on Facebook Monday, saying that Gamin's posts "do not in any way represent the views of our agency."


By late Monday afternoon, Gamin sent out an apology to Fox 35 and other media outlets, now apologizing for his actions, but in a pretty backhanded fashion:

This weekend I made a posting on social media which was in poor taste and did not reflect the sentiment that I was trying to convey. For that, I humbly apologize to all of you. I would especially like to apologize to all the men and women in law enforcement across the country who report to work every day and conduct themselves like the true professionals that they are. Their job is hard enough already and I'm afraid my actions just made it that much harder. I have been a proud member of law enforcement for over 28 years and have spent my entire law enforcement career advocating for and supporting good cops who serve our communities with pride and professionalism every single day. In my recent FB post, I let my emotions and frustration with all the negative media portrayals of law enforcement get the better of me. My intent was to rebut some of the negative messaging and offer a supportive message to all the men and women in law enforcement, clearly I failed. I offer this to you not as an excuse, but simply as an insight to my thoughts. I admit that my post was insensitive and wrong and that it did not convey the actual thought that I was trying to communicate. I am solely responsible for the content of my post which does not reflect the values that I truly believe in and adhere to. It also does not reflect the values of my employer or of any other law enforcement agency. Good cops do great work every day. I deeply regret the my original post and sincerely apologize to all who have been negatively affected by it.


Sheriff Ivey announced today that he was suspending Ivey with pay (GROAN), and launching an internal investigation into whether Gamin violated any agency policy with these Facebook posts, according to the Orlando Sentinel. Ivey said that the posting "was disgusting, despicable and quite frankly not in the consideration of all that has happened in our country right now,” but took no further action.

Gamin's posting antics have been condemned by the Melbourne Police Department, the Florida Association of Criminal Defense Attorneys (Brevard chapter), the Brevard County Democrats, County Commissioner Bryan Lober and State Rep. Anna Eskamani, among many others.