by Caroline Silva and Natalia Jaramillo

Editor's note: Wednesday night's post of this story contained an inaccurate statement about that the Savages had hired attorney Mark NeJame. He notified us Thursday morning that he does not represent the Savages nor any of their businesses. We deeply regret the error, which was made in editing due to a faulty interview transcription. We are continuing to update this ongoing story.

Accusations began online last week, when Instagram user @aveganassbitch posted to call attention to both Swan City Bagels and the Savages' restaurants for failing to speak up in support of the Black Lives Matter movement, saying "I was disappointed in their lack of participation in the movement." After that post, she says she heard from dozens of former employees of both companies, who began direct-messaging her tips about the restaurateurs. Commenters on her post soon turned up racially insensitive tweets from Racine Richman, the owner of Swan City Bagels, who then decided to close her business "indefinitely."

"My old personal Twitter was filled with awful, crude and inappropriate jokes, and obnoxious, insensitive tweets, retweets and trolling between 2012-2018," Richman told Orlando Weekly in an interview.

But it was Sanctum, and particularly Jamie Savage, that commenters really teed off on. After the thread reached more than 500 comments, it became the talk of the local food community, and almost every Orlando Weekly employee was tagged countless times and asked personally why we were not writing about it. Even Florida Rep. Anna Eskamani weighed in.

Orlando Weekly verified the identity of the Instagram user known as "@aveganassbitch," who says she fears retribution and asked to remain anonymous, adding that she was never an employee of the Savages, but that her post struck a chord with those who were. Although this began as a criticism of their perceived lack of support for the Black Lives Matter movement, she began to receive messages regarding a hostile workplace environment at the Savages' restaurants.

"I felt like his boss because I needed to make sure that he wasn't going to go around and make anybody feel uncomfortable." tweet this

"Those first few messages I felt were really important to share," she told Orlando Weekly. "Because they were kind of adding on to the issue of [Chelsie and Jaime] being problematic." She later shared screenshots on her Instagram feed of some of the most alarming claims she received.

Orlando Weekly journalists continued to receive inquiries as to whether we would be reporting on the allegations, and we set out to find people willing to share their experiences on the record. A few said they didn't feel safe using their names, but several people we spoke to did. All of the people we interviewed provided proof of their employment with the Savages.

Nicholas Barbatis-Walker, who worked as lead at Sanctum from January 2019 to July 2019, says that everything seemed normal in the beginning of his employment. However, as time went on, he says, he "noticed [Jamie Savage] would come up behind people and basically start giving them a neck massage without their consent."


As lead, Sanctum employees went to Barbatis-Walker with their concerns and detailed occurrences of sexual harassment. During his last month of employment at Sanctum, Barbatis-Walker says he kept an eye on Jamie to protect the employees.

"Whenever [Jamie] came in the building, I would watch him," Barbatis-Walker says. "I felt like his boss because I needed to make sure that he wasn't going to go around and make anybody feel uncomfortable."

Another former Sanctum employee, Magdalena Munyon, who worked for the Savages between February to November 2019, says Jamie asked about her sexuality during her first week of working at the Sanctum Coffee and Juice Bar. Munyon says Jaime also made several "petty and petulant" jokes about women's body weight.

Munyon says Jamie would constantly ask to massage her and other employees' shoulders and backs. She also says Jamie tried to justify his technique by demonstrating his massage technique on his then-15-year-old daughter.

"I never gave in to him, I was politely firm with him," Munyon says.

When Munyon expressed her discomfort about the inappropriate touching and remarks to her former manager, Munyon says the manager cautioned her not to go to Chelsie Savage, because she already knew.

"I genuinely believe it came from a good place of looking out for my financial well-being," says Munyon of the warning.

Munyon received a promotion to manager after just a few months of being there, and says she felt part of her duty was to warn new girls about Jamie.

"I was not even close to [being] the first girl who has been uncomfortable and harassed," Munyon says. "I was told the story from the very beginning, that Chelsie had been approached by at least one, if not multiple girls, and each time she would either shut them down or belittle their experience. … [Eventually] their hours would be mysteriously cut and they would be fired without notice."

Munyon said the harassment was easier to pass off in the beginning, but got worse the longer employees would work there.

"I think this is why they have been so successful in evading attention on this … because they are not dumb. He kind of gauged the room. There were often customers in the restaurant but he was cautious that they were on their laptop, reading a book or engaged in conversation," Munyon says. "The Savages were very good at making us feel isolated, of making us feel invalidated. There was a pattern."

The couple are well-connected, Munyon says, and many former employees were scared to come forward because "anybody who left, whether it be on good terms or bad terms, they were written off as employees who left on bad terms and thereby invalidating anything they had to say."

Another former employee, who worked at the Sanctum Cafe for four months shortly after its opening in January 2016, seconds the fear engendered by the Savages' connections. She says their prior experience in yoga – both have worked as yoga instructors – helped disguise the "uncomfortable touchy-feely" workplace environment to the point of being "confusing," but it was never hidden.

Another employee who was terminated in March recounted several times when Jamie asked her, "quite blatantly, if I do any vaginal tightening exercises." tweet this

"I had been asked by Jamie to give him my phone number, which I assumed was for work purposes, and this came directly after a conversation I had with him where I opened up about my sexuality – I'm bisexual – and he expressed that I 'hadn't had the right dick yet,'" the former employee says.

"People are terrified now because I'm finding out that they have been responsible for taking down small businesses, small businesses run by former employees, and I have a small business and I would hate to see that happen," she says. "It's scary."

Unwanted shoulder rubbing was not the full extent of the sexual harassment allegations against Jamie, though. Another employee, who was terminated on March 23 after working at Sanctum since October 2019 and being transferred to Sanctum Coffee & Juice Bar in December 2019, recounted several instances in which Jamie asked her, "quite blatantly, if I do any vaginal tightening exercises." She says that he justified this question with his background as a yoga instructor. When she reported this to her manager, she says, the manager tried to rationalize Jamie's behavior with the argument that "Jamie was maybe asking that because Chelsie and him were thinking about having another kid and maybe he was curious about that."

Throughout our reporting, Orlando Weekly reached out to Chelsie and Jamie Savage to hear their standpoint on the unfolding situation, but neither got back to us, despite being contacted multiple times.

On June 4, Chelsie issued an apology on Instagram for her lack of engagement on the BLM issue, saying it was "in her blind spot" as she worked on "how to feed people healthy food during a global pandemic." Somewhat predictably, this did not placate the Instagram masses, and on June 6, she posted a longer apology for "our restaurant operations," saying "you told us in large numbers that we needed to open our eyes and make some serious changes."

"People are terrified now because I'm finding out that they have been responsible for taking down small businesses, small businesses run by former employees." tweet this

This message was up on Savage's multiple restaurants' social media platforms, and on their websites was a longer apology saying, among other things, that Jamie was no longer allowed on the premises of any of the restaurants – though he was only identified as "an owner."

The message was removed from all their social media accounts by Thursday morning, including from Real Damn Good Food [updated Thursday morning to reflect that the message was scrubbed after initial publication], the Savages' virtual farmers market, created as a response to the quarantine lockdown. Chelsie Savage has hired a PR representative specializing in crisis management, and retained the services of an attorney [updated Thursday morning to retract an erroneous name]. She provided the following statement, and chose not to expand upon it despite the offer to (which is still open; if she takes us up on it, we will expand this story).

“It is disappointing that my small family-owned business has come under vicious attack with the apparent goal of destroying what years of hard work and dedication have built. We are in business to serve and employ all members of the public without regard to their color, background or political beliefs. We will aggressively defend our business from these unwarranted attacks using all appropriate legal remedies including appropriate cease and desist notifications to those spreading false information about our business. We will not stray from our primary goal of serving health promoting food to our valued customers.” 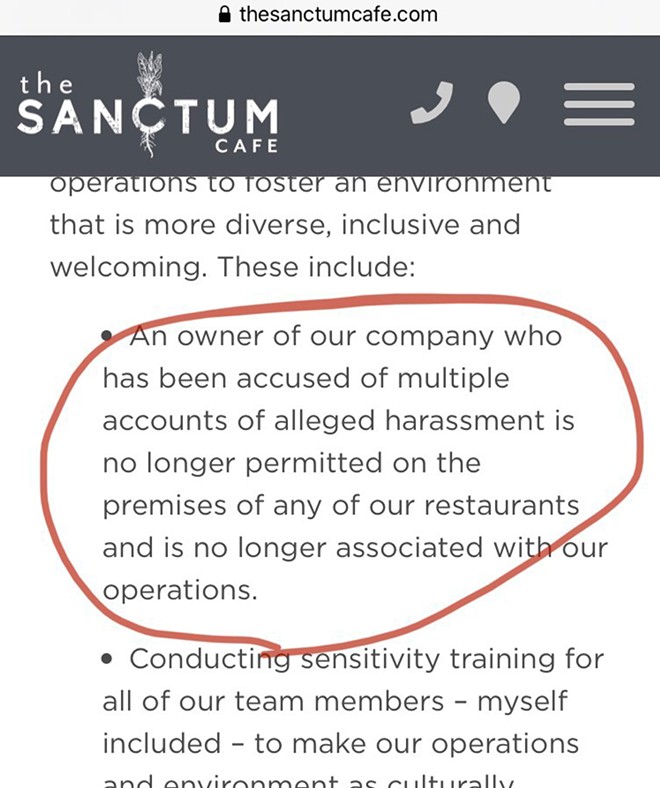 This is a developing story, and we will continue to report on any significant new developments. Please email tips@orlandoweekly.com to reach a member of our editorial team.