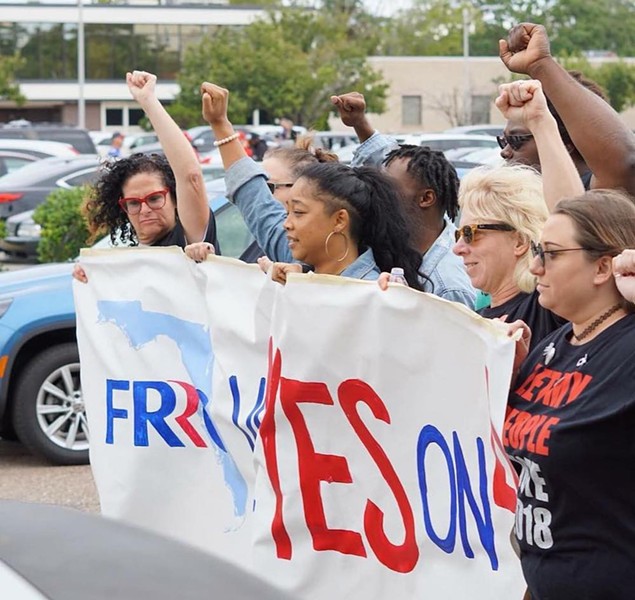 Arguing that the case is of “exceptional importance,” lawyers for Gov. Ron DeSantis have made a rare move of asking a full appellate court to consider a challenge to a voting-rights ruling that would pave the way for hundreds of thousands of felons to cast ballots in the November elections.

Appeals in federal lawsuits are almost always initially heard by three-judge panels, whose decisions can be revisited later by the full court in what are known as “en banc” hearings.

But the DeSantis administration last week asked the 11th U.S. Circuit Court of Appeals for an initial hearing by the full court, due in part to a panel decision earlier in the case and because of the far-reaching nature of the lawsuit.

The request is “very, very unusual,” veteran elections-law attorney Mark Herron, who represents Leon County Supervisor of Elections Mark Earley in the lawsuit, told The News Service of Florida on Wednesday. Earley is one of the defendants.

DeSantis’ lawyers made the filing after U.S. District Judge Robert Hinkle in May ruled against the state in a battle over a 2019 law that was aimed at carrying out a constitutional amendment to restore the voting rights of felons “who have completed all terms of their sentences, including parole and probation.”

Hinkle’s May ruling came after he issued a preliminary-injunction decision in October that said part of the 2019 law requiring felons to pay “legal financial obligations” – fees, fines, costs and restitution – associated with their convictions was unconstitutional. A three-judge panel of the Atlanta-based appeals court in February upheld the preliminary-injunction decision, which found that the state cannot deny the right to vote to felons who are “genuinely unable” to pay court-ordered financial obligations.

DeSantis requested an en banc rehearing on that decision, but the appeals court turned him down.

In the May ruling, Hinkle cemented his earlier decision by laying out a procedure for hundreds of thousands of Floridians who have been convicted of felonies and have court-ordered debts to be able to cast ballots in November. Under the process Hinkle crafted, the vast majority of convicted felons in Florida would gain access to the polls by simply registering to vote.

In the state’s appeal filed June 2, lawyers for DeSantis argued that a hearing by the full appeals court is warranted because of the rulings by Hinkle and the February decision by the three-judge panel.

The rulings are “contrary” to legal precedents, and “initial consideration by the full court is necessary to secure and maintain uniformity,” the state’s lawyers wrote.

The appeal “also involves one or more questions of exceptional importance” and deserve the full court’s consideration, they argued.

In the appeal, DeSantis’ lawyers blasted Hinkle’s May 24 “startling” ruling, saying it “stripped Florida of a defining characteristic of its sovereignty: the power to determine, within the constraints of the Constitution, the composition of the state’s electorate.”

“It gets Supreme Court precedent wrong. It gets binding circuit precedent wrong. And instead of remedying a constitutional violation, it creates one,” they wrote, adding that the three-judge panel “made some of the very same mistakes” in February.

The state also took issue with the process laid out by Hinkle, calling it “a substantial overhaul of Florida’s electoral process.”

And the state took issue with a form created by Hinkle for felons to request an “advisory opinion” from the Florida Department of State to determine if they are eligible to vote.

“One would be hard-pressed to find a greater intrusion on state sovereignty,” DeSantis’ lawyers argued.

The issues in the appeal “are critically important and time sensitive,” they said.

“With a primary election less than three months away, and a presidential election only three months after that, the need for a prompt and decisive ruling by this court is clear and urgent,” the state’s lawyers wrote in the 34-page brief, referring to August primary elections and the November general election. “If elections are held with the district court’s injunction in place and that injunction is later vacated because it erroneously reenfranchised hundreds of thousands of ineligible voters, the integrity of those elections will have been corrupted and their results possibly opened to challenge.”

Initial en banc review “is the state’s best, and perhaps its only, option for securing timely relief,” the DeSantis administration lawyers said.

In a response filed Friday, attorneys for voting- and civil-rights groups that filed the class action lawsuit on behalf of felons who’ve served their time behind bars agreed that “the public interest will be served by a prompt resolution” of the case. But they asked for more time to file briefs in the appeal and accused the state of mischaracterizing “the scope and effect” of Hinkle’s decision.

“The ruling provided much-needed clarity for hundreds of thousands of voters about their voting eligibility,” the plaintiffs’ lawyers wrote.

Hinkle’s decision “provided clarity and improved efficiency for voters and elections officials after the state repeatedly failed to offer any plan to implement the electoral provisions at issue in this case,” they argued.

The “state defendants utterly failed to create or implement a workable process” for administering the law since it went into effect nearly a year ago and after Hinkle’s October preliminary injunction, the plaintiffs said.

The law, approved by Republican legislators last year, required felons to pay court-ordered fees, fines, costs and restitution to be eligible to vote. Backers of the legislation (SB 7066), including DeSantis, a Harvard Law School graduate, maintain the law reflects the language of the constitutional amendment, which was approved in 2018.

But opponents of the law argued that linking voting rights and finances amounts to an unconstitutional “poll tax.” The law was problematic for a variety of other reasons, they said.

Testimony from county elections officials, clerks of court, felons and scholars throughout an eight-day trial last month spotlighted the difficulty in ascertaining whether people who were convicted of felonies owe money. Court records, especially in older cases, can be contradictory or incomplete. Databases are difficult to navigate. People sometimes have to pay to obtain the records.

The plaintiffs’ court filing Friday pointed to Hinkle’s May 24 ruling, which said the state “has shown a staggering inability to administer the pay-to-vote system.”