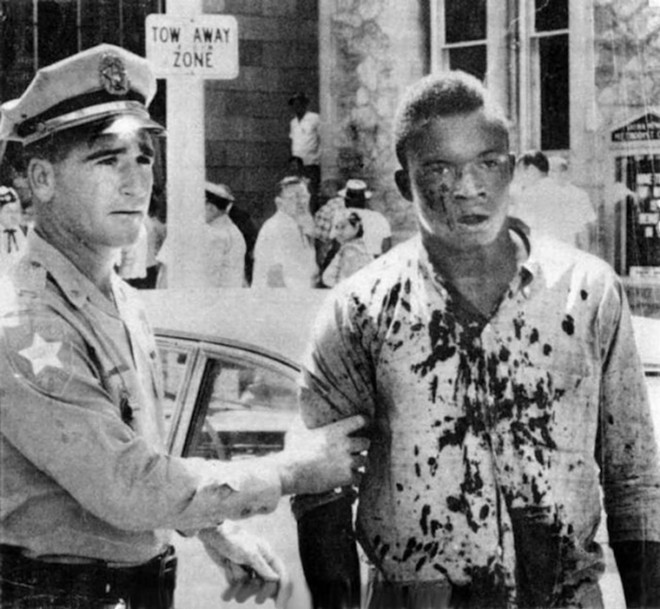 With the largest civil rights movement in contemporary history playing out as a backdrop, Jacksonville is now celebrating the fact it will officially host the 2020 Republican National Convention. Coincidentally, will be held on the 60th anniversary of a race riot in that city.

Known as “Ax Handle Saturday,” on Aug. 27, 1960, more than 200 white people, including Ku Klux Klan members, chased down Black people in the streets of Jacksonville and beat them to submission with baseball bats and ax handles.

Now, it appears the marking of this horrific occasion will be honored with a convention honoring our county’s biggest bigot.

The event happened after years of bubbling racial tensions in Jacksonville, including a local high school being named after the first Grand Dragon of the Ku Klux Klan. tweet this

Mayor Lenny Curry, a Republican, made the announcement yesterday in a flashy social media video, stating that the convention will be held from Aug. 24-27, which means Trump will likely give his closing speech at the same moment that, 60 years prior, Jacksonville police allowed KKK members to violently attack Black protesters.

“If you think you know Jacksonville, think again,” said Mayor Curry in the video.

For the unfamiliar, the events of Ax Handle Saturday are eerily similar to current-day protests. The riot began after the Jacksonville Youth Council and the National Association for the Advancement of Colored People organized a peaceful lunch-counter demonstration to protest segregation.

“The attack began with white people spitting on the protesters and yelling racial slurs at them. When the young demonstrators held their resolve, they were beaten with wooden handles that had not yet had metal ax heads attached,” wrote Dr. Ben Brotemarkle, executive director of the Florida Historical Society, for the state archives.

Rodney L. Hurst, who as a 16-year-old in 1960 led sit-ins at “whites only” lunch counters in Jacksonville, wrote about the incident in his book It Was Never About a Hot Dog and a Coke.

“The intent was to scare, intimidate, and bring physical harm,” Hurst says about the KKK. “Many times you could not draw a line between the Klan and law enforcement, because law enforcement were at least accomplices to a lot of the things the Klan did.”

The event came after years of bubbling racial tensions in Jacksonville, including a local high school being named after the first Grand Dragon of the Ku Klux Klan, Nathan B. Forrest, in 1959. Of course, Jacksonville has since renamed that school to Westside High School, and “whites only” lunch counters no longer exist, but it’s tough to argue that things have gotten a whole lot better.

Last week, 1,200 former Justice Department staffers called for the resignation of Attorney General Bill Barr after he ordered the violent beating of peaceful Black Lives Matter protesters so Trump could be photographed holding a Bible in front of a church.

Plus, earlier this week Trump threatened to invoke the 1807 Insurrection Act, which would allow him to use the military against U.S. citizens.

None of this is surprising, coming from the same man who referred to neo-Nazis in Charlottesville as “very fine people” and just recently rejected the idea of renaming military bases currently honoring Confederate military commanders.

So, of course, the upcoming GOP convention is racially tone-deaf beyond belief. It’s also tough to believe that his upcoming rally in Tulsa on “Juneteenth,” the anniversary of the United States ending slavery, is anything but a grotesque dog-whistle.

“Jacksonville is a great city that will showcase Florida’s energy, facilities, entrepreneurship and commitment to bring together the delegates of the Republican Party at a historic time in our nation’s history,” said Florida Gov. Ron DeSantis in a press release, with absolute zero irony. “There is no better place to host the Republican National Convention than in the nation’s largest swing state that is also home to President Trump and to the country’s best governor. We are thrilled Florida was selected and we will not let them down.”