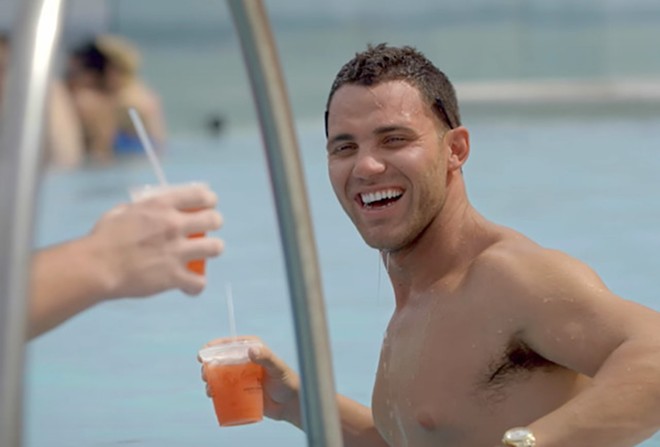 Siesta Key, a Florida-based reality show about rich kids enjoying boats and pools, has parted ways with the show’s lead.

The season premiere of MTV’s Siesta Key was last night, and as some of you may have noticed, the show was significantly shorter than the usual two-episode block. Also, the lead shirtless guy, Alex Kompothecras, was barely present.

Well, now we know why.

We’ve made the decision to cut ties with Alex and are editing the current season to minimize his presence. He will not be in future seasons of Siesta Key.

“We’ve made the decision to cut ties with Alex and are editing the current season to minimize his presence,” said the post. “He will not be in future seasons of Siesta Key.”

Kompothecras’ absence is notable since his dad, wealthy Sarasota chiropractor Gary Kompothecras and guy behind the 1-800-ASK-GARY billboards, literally financed and created the show pilot back in 2016.

MTV did not specifically say why Kompothecras was fired. However, TMZ and E! News report that sources at MTV say his exit revolves around an alleged racist social media post.

As of now, it’s unclear what racist post was the catalyst for Kompothecras’ termination, but the former cast member does have a controversial past on social media. Before the show’s debut in 2017, the entire cast literally purged their social media accounts, but since the Internet is forever, screengrabs remained.

One now-deleted post from Kompothecras’ Instagram account shows him pouring champagne on a woman, with the hashtag #onceyougoblackyourneverwelcomeback. Other screengrabs also allegedly show the cast member commenting the N-word on a photo of Black people wrestling in water next to a photo of hippos. In another screengrab, Kompothecras’ account also replies “damn jiggaboos.”

Other controversial posts from Kompothecras revolve around animal abuse. In a video from 2017, Kompothecras can be seen firing a round into a shark from his boat. On a related note, previous Instagram posts revealed Kompothecras was also known for fishing with his buddy Michael Wenzel, the infamous shark-dragger.

Outrage over Kompothecras’ connection to Wenzel actually resulted in the cancellation of the Siesta Key premiere party in Tampa.