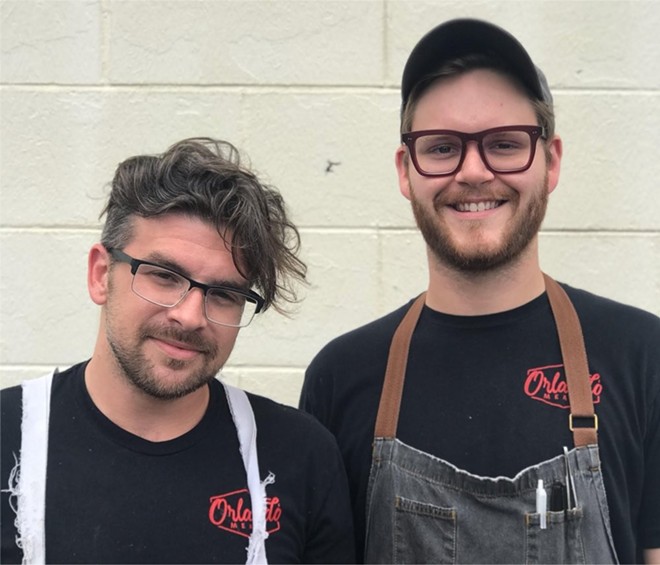 The mad wizards at Orlando Meats will ditch the flesh in exchange for two nights of plant-based fantasy.

Eliot Hillis, Orlando Meats' culinary director, along with head chef Seth Parker, will take over the kitchen at Eola General on Friday and Saturday, June 26 and 27, from 5:30 p.m. until close, for a vegan pop-up dinner bizarrely titled "Night Shovel."

If there's one thing I know about Hillis, it's that obscure references are as much of an indulgence for him as mushroom conserva.

"It's from Archer," Hillis says about the 'Night Shovel' tag. "It's a name that I love. It's silly and stupid."

It might be silly, perhaps even stupid, to stage a vegan pop-up in the middle of a pandemic, but being a fearless killer of convention comes with its risks.

Either way, Hillis and Parker will be shoveling that conserva next weekend (it'll be served with a radish salad and greens) along with other à la carte items like fried compressed tofu with vegan kewpie mayo; falafel with vegan yogurt; and black sesame rice chips with vegan ranch.

A coconut panna cotta with pineapple and berries will supply a sweet ending to the gathered, who'll be required to wear masks until they're seated at one of the outdoor tables.

A little something in the works for our vegan friends next weekend. Pairing with some FUNKY skin contact wines. Stay tuned.

Noonan says the appropriate safety measures will be implemented for the pop-up including sanitation stations, floor markers and masked servers and staff.

"We only have exterior dining at the moment, so the tables have the appropriate spacing too," he says.

"If it gets too crazy, we will adjust."

Tell me about it, Shaun.