Another record-high day of new COVID-19 cases in Florida, as state surpasses 90,000 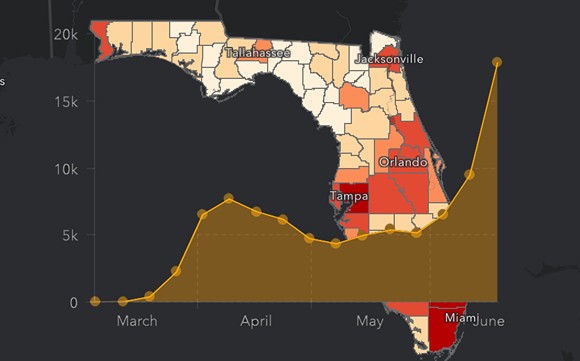 New same-day cases of coronavirus across Florida reached a sickening new record of 4,049 on Friday, according to data released on Saturday (updated to source from DOH, see editor's note below).

The Florida Department of Heath reports the state has had 93,797 total patients testing positive since the pandemic began, with 73,493 cases currently active.

There were 37 new deaths statewide on Friday, bringing the overall death toll to 3,144.

Miami-Dade, Broward and Palm Beach Counties posted a combined total of 1,483 new cases, or more than a third of Friday's statewide jump. Hillsborough County had the fourth-highest total with 337, and Orange County had the fifth-highest number of new cases reported on Saturday with 295.

After she was fired by the state, Jones raised more than $178,000 on GoFundMe to create her own dashboard, which includes factors DOH does not.

At a Friday press event at Florida International University, Gov. Ron DeSantis pointed to increases in testing as the culprit for the soaring numbers.

"Our testing capacity is much greater than it was," DeSantis said. "A lot of the people who are tested [now] not are asymptomatic. They're testing everybody who comes in."

The event was more scripted and controlled than the more ad-libbed and clumsy presser DeSantis held on Tuesday, where he misstated the percentage of Orlando International Airport workers who tested positive, and offended farmworkers by saying the state's soaring rates are "overwhelmingly Hispanic."

At Friday's event, Miami-Dade County Mayor Carlos A. Giménez vouched for DeSantis' work, and said how important it is not to go back to business closures that ended with phase 1 and phase 2 reopenings.

"We're not going back because we can't go back," said Giménez. "We are going to do more enforcement. Enforcement of the rules that we put into place ... is the key to our success."

DeSantis said Friday that one in 15 people in Florida have been tested. The median age of COVID-19 cases statewide was reported as 37 on Friday, with the median age of Orange County patients at 29.

"It's going to continue to go down, based on what we've seen in the last couple of days," DeSantis said of the median age of new patients, now that more asymptomatic people are being tested.

Editor's note: An earlier version of this article sourced Worldometer, which has been cited by Johns Hopkins University and the Spanish and British governments, but is often misattributed as a product of Johns Hopkins itself. Despite being used as a source by the Financial Times, the New York Times, the Washington Post, Fox News and CNN, experts and editors have criticized Worldometer for persistent errors, and we will exclude it from our coverage. (Thanks, J.S., for the tip.)