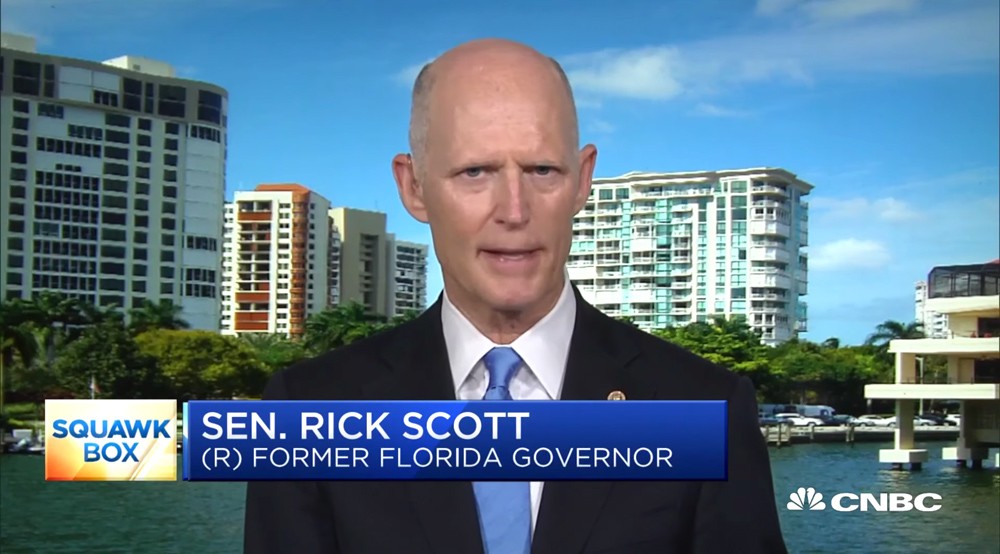 U.S. Sen. Rick Scott took to CNBC Monday morning to talk about planning the Republican National Convention – which is now moving most activities from Charlotte, North Carolina, to Jacksonville amid the coronavirus pandemic – when he seemed to dispute a reason given by Gov. Ron DeSantis for recent record-high new cases.

"Big thing is, everybody's got to take this seriously, and especially when you see the uptick in cases," Scott told CNBC host John Kernan on Monday. "Some of it might be tied to testing, but it’s clearly not all tied to testing," said Scott.

DeSantis has cited an increase in widespread testing for record-high new cases announced on three consecutive days from Thursday to Saturday, culminating in more than 100,000 total coronavirus cases announced as of Monday.

In the interview, Scott said he will require people to practice social distancing and wear masks at the convention in August.

"So all of us have to double down and say to ourselves, are we being careful enough?" Scott said. "People need to wear masks. They need to social distance. You got to do this in a manner that no one gets sick."

President Donald Trump announced he had "no choice" but to make the move, after North Carolina Democrats, including Gov. Roy Cooper, refused to allow the RNC to fill a stadium with crowds for Trump's nomination-acceptance speech. Some smaller convention events will still take place in Charlotte, in order to avoid breaking contracts.

While addressing the new infections over the weekend, DeSantis said masks should remain voluntary, while in Orange County, Mayor Jerry Demings made masks mandatory, which some conservatives are suing to stop. Hillsborough County joined in by issuing their own mask order on Monday.

Also over the weekend, viral video showed an angry Florida man trying to fight his way into a Walmart after refusing to wear a face mask.

"Let's try to get back to normal as fast as possible, but let's do it in a safe manner," Scott emphasized on Monday. "We got to do this safely so we don't continue [to] see this uptick in the number of cases."

The RNC said that Trump's speech will likely be held at the VyStar Veterans Memorial Arena in Jacksonville.