The "new normal" continues to develop as much of the nation begins to reopen, and nowhere are the changes more noticeable than in restaurants. From fine dining to fast food, the entire industry is facing a renewed focus on hygiene and uncertainties regarding the future. But few restaurants face a heavier impact than buffets.

From the ginormous buffets of Las Vegas to the breakfast buffets common in many hotels, the self-serve, all-you-can-eat dining experience is synonymous with vacation, for some tourists. Now everyone from cruise lines to Disney World is looking for ways to keep the unlimited food appeal in place while creating an experience that addresses the concerns of both the current pandemic and, just as significant, nutrition and dietary restriction concerns.

In the past few weeks, we've seen three approaches. The first is to retain the same self-service model as before. Enhanced cleaning may take place, but cross-contamination and pandemic-related concerns seem to be ignored. Some pizza buffets have begun issuing personal serving utensils and gloves for diners to use at the buffet, but this is more problematic at buffets with allergen concerns or where a wide variety of serving utensils are needed.

Not surprisingly, one of the few states that see buffets reopening with this model in place is Florida, where 80 percent of the 15 Golden Corrals to reopen with the buffets in the previous self-service model were located. Golden Corral's website now lists all of those locations as "no touch" buffets. Diners at similar restaurants within the Central Florida region report that they see no noticeable changes to the buffets.

In another approach, buffets are set up similarly to how they were pre-pandemic, but stations are staffed by a server who will plate the items for diners, cafeteria-style. Golden Corral is also testing locations where patrons are accompanied by a personal server who plates each item for them. In both scenarios, staff are handling serving utensils and plates. Many cruise ships are opting for staffed stations where guests pick up pre-plated items or have a crew member plate items for them. Virgin Voyages was planning to use its staffed station restaurant, which it insists isn’t a buffet, prior to the pandemic, but now nearly every major cruise line has or is expected to announce similar plans.

Speaking to Eater, John Johnson, the executive chef at the Four Seasons Hotel New York, announced that they were looking at potentially replacing their traditional breakfast buffets with a conveyor belt that allows for small dishes to move past seated guests. Each dish would be within a “small personal vessel.” Conveyor belt service has also been discussed for Vegas buffets, but Orlando already has that service here: For instance, Nine Spices Hotpot, Sushi Yummy at the Florida Mall and Mikado Sushi & Hot Pot on I-Drive at Icon Park offer conveyor-belt service.

But U & Me Revolving Hot Pot near the entrance of Disney World is the first local restaurant we know of using robot waitstaff.

U & Me opened in May with both a conveyor belt and autonomous robots to assist in serving diners. A "pilot" robot helps guide customers to their assigned table where a conveyor belt allows individually plated dishes, each in a protective cover, to roll past the table. Some items are delivered to the table via a multi-shelved delivery robot. Similar robots are already being tested by hotels within Central Florida, but so far, those tests have not included use within the restaurants or the breakfast buffet. Despite being in the works prior to the pandemic, a KFC in Moscow has also successfully introduced a conveyor belt and robotic server that encourages social distancing.

The robots at U & Me are from Shanghai-based Kennon Robotics and are part of a growing line of commercial robots by the company. More than 6,000 of Kennon’s service robots began reporting for duty within the past 12 months, with the vast majority being within Asia where acceptance of robot assistants is more common than within the West. The pilot robot that U & Me uses as a host was introduced by Kennon in December. Few restaurants in the U.S. currently have robotic servers, but Kennon is just one of dozens of companies now looking to change that and social distancing-fueled health protocols may prove to be the ideal scenario, especially for restaurants that now face increased labor demands.

Whether it's large family-style portions delivered to the table by a human server or individual portions via a robotic system, the all-you-can-eat spirit of the classic buffet is alive and well (even if we can't say that of 100 percent of its fans). However, the days of endless perusing of buffet stations and attempting to pile your plate as high as possible may have come to an end. 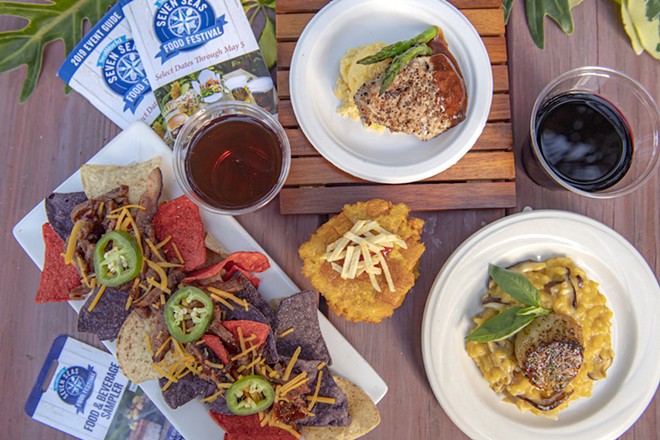