Editor’s note: We killed the comments section on Orlando Weekly; long live letters to the editor 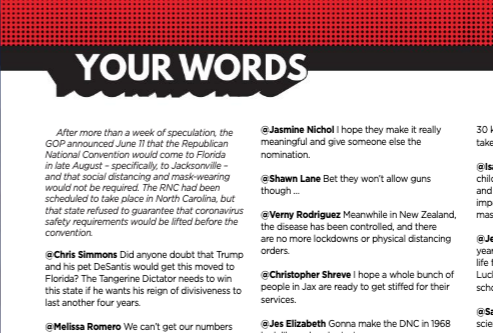 No more spam! I'm thrilled that I can finally announce we've decided to pull the plug on the commenting module on Orlando Weekly articles. To those of you hoping to find a job that pays you $5K a week to work from home ... sorry, you won't find it in our comments section.

This decision came after much discussion among OW staff. There's been a backlash against comments sections going on for a few years now, with outlets like Popular Science, NPR, Vice, Vox and Reuters all ditching them. On paper, they were a great idea, a utopian notion of the World Wide Web providing an instantaneous "platform" for "dialogue" between reader and creator. And sure, I'll miss the insights of those who added thoughtful perspectives that our articles missed, especially when you chimed in with the occasional correction to a factual error.

In reality, comments sections everywhere routinely devolve into racism, misogyny, Hitler (via Godwin's Law), spam and personal attacks. It's even worse for women journalists, who are called names far more vicious than their male counterparts. I refuse to believe some of you aren't 13-year-olds, but I know some of you are grown men. Ideally, there would be a web editor who could moderate the comments, but with staff cuts in recent years that isn't really possible.

Now, I know what some of you are thinking: "How DARE Orlando Weekly stifle free speech!" Well, is it really free speech if the trolls are granted anonymity and are held to a different standard than our own writers? As editor in chief, I actually care about what's published on Orlando Weekly, and that should be extended to the comments section. Plus, with comments sections being at the bottom of the article, it was as if trolls and spammers were literally getting the last word.

People act like comments sections are an inalienable human right, but there's really no historical analog for them — except for maybe the old-fashioned letters to the editor. Remember those? We run a small letters section each week in the print edition of Orlando Weekly, but people don't really seem to write letters or emails anymore. In recent months, I've been scraping together the best comments from the web to use in print, but it gets harder to find comments that are 1) legibly written and 2) not simply memes week after week.

You know, like the good old days — before comments sections.

Bloggytown opinion letters to the editor spam trolls no comments