New Fort Wilderness barn gives us our first, and maybe only, glimpse of what Disney's Reflections resort will look like

Since 2011, Disney has been looking to capitalize on the southern shores of Bay Lake, where the former River Country water park was located. In 2018, Disney confirmed it would be moving ahead with a new DVC resort, Reflections: A Disney Lakeside Lodge.

Reflections is surprisingly close to the Fort Wilderness Settlement, causing the outdoor character dining experience Mickey’s Backyard BBQ to be shuttered and forcing the Tri-Circle-D Ranch, home to many of Walt Disney World’s horses and ponies, to be moved a few hundred feet away from its previous location.

The former location of the Tri-Circle-D barn is now behind construction walls in the Reflections area.

Walt Disney World has been home to the Tri-Circle-D Ranch since its opening in 1971, but this is the largest and most technologically advanced barn the ranch has ever seen. All stalls have automatic water stations, there are three special tack rooms, and there's even a new foal, Violet, born June 18. Disney’s historic 1907 Dragon Calliope wagon, purchased in 1955 by Walt Disney himself, now has a glass-enclosed stall in the barn. A button allows visitors to hear the calliope, which is rarely seen in use these days. Nearby is a small museum exhibit showcasing Walt Disney’s interest in horses. A small walking trail nearby provides a landscaped track for pony rides and large outdoor tracts for the animals to enjoy on their days off. 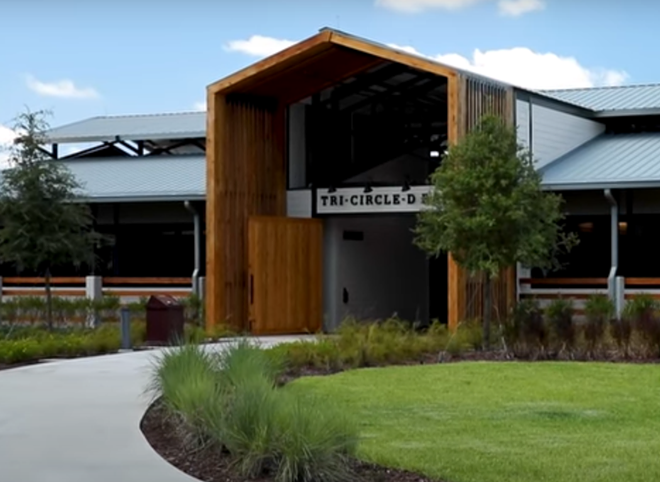 The new barn bridges the more rustic aesthetic of Fort Wilderness and the modern design of Reflections. Many of the same wood and metal tones are seen in concept art for Reflections can be seen in the new barn, which is more than double the size of the former one. Similar landscaping can also be seen in both.

Nearly a billion dollars' worth of construction projects across Disney Parks and Resorts are currently paused in reaction to the ongoing pandemic and corresponding economic slowdown. Rumors point to the Reflections resort being placed on indefinite hold, and this comes as no surprise. Travel is still at record lows, and a full recovery for the tourism sector isn’t expected any time soon. Disney is reportedly also considering not reopening certain on-site resorts until at least the end of the year.

While the need for an increase in timeshares and hotel rooms will eventually return to Walt Disney World, it’s clear the 2022 opening date for this resort will likely be pushed back by at least a year or more. Similar delays have now been confirmed for Epcot’s Spaceship Earth refurbishment and Universal Orlando’s Epic Universe theme park.

Reflections was to be a link between the Wilderness Lodge and the Fort Wilderness Settlement area, with all three resorts having pedestrian access to the Settlement area where the Hoop-Dee-Doo Revue dinner show is located. This small commercial "settlement" also has two other dining venues, a small retail store and an arcade.

The Hoop-Dee-Doo Revue is on the leaked list of attractions that are now being reviewed by Disney to ensure any objectionable components are removed. So far, the only attraction on the leaked list confirmed to be getting an update is Splash Mountain. Updates to the Settlement area to bring in a more modern aesthetic have been rumored, though, like Hoop-Dee-Doo itself, there have been no indications such a change has been approved.

Fort Wilderness did alter the former Clementine’s Beach – the western section was closed for Reflections, while the eastern part was expanded. A petition to save the beach and block the bungalows planned for the location has collected fewer than 200 petitions since launching in late 2019.

The new beach and barn are the only projects linked to Reflections that have opened. With the resort now likely to be on indefinite hold, they may ultimately be the only changes that we’ll ever see.
_
Please follow CDC guidelines and Orange County advisories to stay safe, and please support this free publication. Our small but mighty team is working tirelessly to bring you news on how coronavirus is affecting Central Florida. Please consider making a one-time or monthly donation. Every little bit helps.