A summer with no Brits could spell big trouble for Orlando

Florida is currently seeing record levels of confirmed COVID-19 infections, and visitors from Europe and the U.K. are taking notice.

In a significant hit to Orlando’s tourism economy, both U.K. tour operator TUI and Virgin Atlantic have confirmed they will not offer any tickets to Orlando this summer. Virgin pushed back the restart of its U.K.-to-Florida flights from July 20 to Aug. 24, noting that the new date is "provisional." Meanwhile, Europe’s largest travel and tourism company, TUI, has canceled all Florida packages until December.

Via a prepared statement explaining where TUI would begin offering packages, TUI U.K. & Ireland Managing Director Andrew Flintham explained, “Initially, we are focusing on destinations where we anticipate air bridges being in place, such as Greece and Spain. But we know many Brits are eager to travel again, and we have ambitious plans to rapidly increase our programme as soon as possible, to offer even more choice when it comes to holidaying this summer.” Going on, he stated, “If a destination has a quarantine in place, we won’t go there. If local restrictions or measures in place at hotels or resorts significantly impact the original holiday experience you booked, we won’t take you there.” [italics in original quote]

The one-two punch of Virgin and TUI both abandoning Florida during the crucial summer months has the travel industry concerned. Officials have privately expressed concerns about Orlando’s tourism market, especially as rumors of a new shutdowns and furloughs spread among employees at local amusement parks.

One person familiar with Visit Orlando’s internal numbers tells us, “Everything right now is in-state, local traffic. And you and I wouldn’t be caught dead at the parks in the middle of the afternoon when it's 95 with 100 percent humidity. The parks are busy certain times of the day but it’s nothing like before. … We thrive on Europeans, especially Brits. Driving down the street you don’t see the ‘red lobsters’ [a nickname for the overly sunburnt visitors] that are a sure sign of Brits and other northern visitors. They’re not here.”

For years Central Florida has been reliant on visitors for the U.K, the top overseas market for visitors to Orlando. Central Florida is also home to what is believed to be the largest ex-pat population of Brits.

The situation between Orlando and its missing British visitors is complicated. Simon Veness has been covering Orlando for British readers since the 1980s and authors the best-selling Brit Guide to Orlando book series.

He explained that a lot of the unknowns are related to the current flight bans. “Obviously, the key factor is when Trump is going to drop his ban on flights from Europe to the U.S. No one has any idea, so the U.K. airlines and holiday companies are having to play a (bad) guessing game right now.

“Virgin had announced, about the beginning of June, they would resume flights to the U.S. on July 20, but more in hope than anything else. That got the U.K.'s Florida fans very excited, as they assumed Virgin had a real knowledge of the situation. … But, as we dragged on through June with no announcement about an end to the flight ban, the airlines and tour operators started to get cold feet. When they then saw the huge media outcry against Disney's proposed reopening with masks, reservations, etc., that seemed to be the tipping point.

“Now, with still no end in sight to the flight ban, the likelihood of a Disney vacation being a very different experience, and Florida's spiraling virus numbers, all the U.K. operators (of which TUI and Virgin are easily the biggest) have decided to cut their losses, cancel the summer season for Florida and try to look ahead to the holiday period in December.”

The sentiment that things will begin to bounce back by winter is shared by many in the industry. Convention and hotel bookings so far are remaining steady for November and December, though that may change as we approach the end of summer and move into fall.

Visitors from Europe are now questioning when it might be safe to visit the coronavirus-ravaged state.

Giovanni Amendola is an avid Disney fan, having visited the company’s resorts on three continents. A Frenchman who now lives in Switzerland, Amendola is rethinking his upcoming trip to Florida. “I’ve already booked a week at Disney World and three nights at [Universal Orlando’s] Cabana Bay for a trip in January 2021. But now, I don’t think I’ll go, even if it means losing my deposit. The way the U.S. government and the state handle this pandemic is scary and seeing people say, 'I won’t wear a mask, it’s my freedom' is not reassuring.

“To me, it’s really more of a ‘U.S. problem’ than a ‘park safety problem.’ At the moment, the U.S. doesn’t seem like a safe place to travel to. The only way I’ll come back is if the virus kind of “dies out” as SARS did, or when we’ll have vaccines. I still trust Disney to keep the guests safe, but I may visit one of the resorts in Europe or Asia instead.”

Amendola’s move to cancel his 2021 trip points to a problem for Orlando that will last well beyond this summer. Veness confirmed that he too had been hearing about more Europeans who are swapping out their Florida trips for locales that are more adequately addressing the pandemic.

“The U.K. has started to look more at short-haul and domestic holidays in the short term as the 'safer' option. They are increasingly thinking of trips to Spain and Portugal rather than the U.S., or just staying in the U.K. for now – which, so far, has been enjoying good summer weather.”

For Orlando, the lack of visitors this year may also mean less favorable coverage of the city and state in media that potential visitors consume for years to come.

Familiarization trips, or FAMs, allow social media influencers, bloggers, travel writers, and other media personalities to experience Florida’s offerings, which leads to positive coverage of the state’s largest industry. Now, nearly all of those trips have been postponed or canceled. Multiple social media influencers confirmed that their Orlando FAMs have been canceled, and Visit Orlando hasn't reported hosting any such events since early March. When responding to Orlando Weekly, Visit Orlando did not provide any official information on when the last FAM was or when they plan to restart the familiarization trip program.

Simon Veness acknowledges that Florida has a fight ahead of it as it tries to convince Europeans it is safe to come back to the state.

“It may well be that the recent spike in Florida's virus cases has now made real headlines overseas, and that has been the final straw for TUI. The U.S. is increasingly seen as an ungoverned mess in Europe, and it's going to take a lot to rebuild the confidence of the U.K./Euro market in the next few years (which is a sentence I never thought I would say!).

“It is definitely a worry right now, and, for the first time since the pandemic started, Florida and Orlando look to be in for a really tough long-haul fight to win back the U.K./Euro market. It is incredibly resilient, and there is still a very loyal U.K. market for Florida, but this is going to test it like nothing else we've seen.” 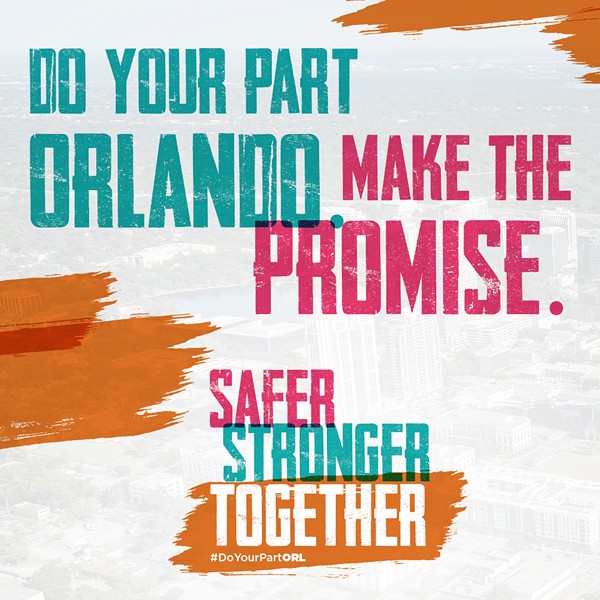 “We all need to do our part and follow the guidelines set forth for reopening businesses. That includes wearing masks, regular hand-washing and social distancing,” explained Tim Giuliani, Orlando Economic Partnership president and CEO, in a prepared statement regarding the new initiative. “By doing these things, we can build consumer confidence so our economy can recover, and fewer people have to suffer the consequences of COVID-19.”

Orange County Mayor Jerry Demings was among the local leaders who took a four-day trip to London in November with the focus on promoting Central Florida to Brits. At the time of the trip, Demings was quick to point out that Brits spent twice as much as domestic visitors. That point was echoed in February when Demings led a panel discussion with Her Majesty’s Consul-General Nicolette Brent, MBE, on the influence of the British market on Central Florida's economy. Also on the panel was Adrian Jones. Originally from the U.K., Jones came to the U.S. to help British amusement company Merlin open attractions including Legoland Florida, Madame Tussauds, and the Sea Life Aquarium. Jones is now Chairman of the Board at Visit Orlando.


In an interview with Orlando Weekly regarding the lack of international visitors this year, George Aguel, president and CEO at Visit Orlando, didn't seem concerned with the lack of the high-spending Brits. Instead, he said the agency would be focusing on domestic travelers. “Given the fact that over 91 percent of our visitor base traditionally comes from the U.S., plus the current challenges of overseas travel, our primary proactive marketing efforts will focus on domestic visitors through the end of the year as that market has the greatest potential. We are, however, maintaining strong communication with the travel trade industry in our core international markets with ongoing updates on the recovery process and openings, and offering training for future travel opportunities in anticipation of their eventual recovery."

For Orlando, and Florida, where tourism is the cornerstone of the economy, the lack of deep-pocketed European visitors will cause repercussions for years to come. But it may ultimately lead to improvement, as local voices call for a more resilient economy that can better weather economic uncertainties. As one representative at one of Florida’s largest tourism associations put it, “The lesson is clear. We’re going to have to pivot our thinking and values.”