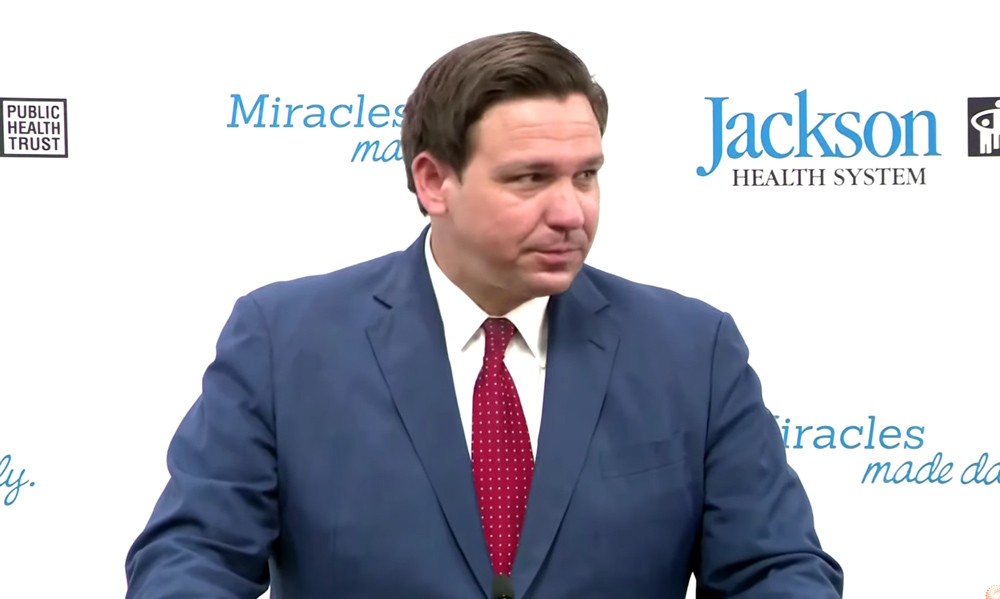 A defiant Gov. Ron DeSantis faced a tense news conference on Monday at Jackson Memorial Hospital in Miami, the day after a record-setting weekend delivered 27,924 new statewide COVID-19 cases between Saturday and Sunday.

As his state's coronavirus case total reached 282,435, with a death toll of 4,277, DeSantis took to the podium to deliver prepared remarks including, "the percentage of people who are testing positive has finally started to decline," but before he could begin spinning, a heckler later identified as Thomas Kennedy, with "immigrant youth-led network" United We Dream, shouted at DeSantis, briefly interrupting him.

"We are getting record-breaking cases every day, and you are doing nothing!" Kennedy yelled.

It's a good thing he didn't have a shoe to throw.
"Certainly," the governor would later claim, "we can say the percentage of people who come in and test positive has stabilized," before digging in his heels once again on refusing to order a statewide mask-wearing mandate.

"I hear you," DeSantis said, adding, "we can’t get swept away in fear."

Later at the same press conference, Miami-Dade Mayor Carlos Gimenez addressed his community's crisis, saying, "until we start to drive down the contagion level in Miami-Dade County, we can’t get a handle on it."

Gimenez said if the county's rates continue, they would roll back reopenings.

"What we were seeing in Wuhan six months ago, now we're there," said an infectious-disease specialist from the University of Miami Health System. tweet this
At a separate news conference, Miami's Republican mayor, Francis Suarez, told media Monday that nearly half of Florida's intensive-care units are at least 90 per cent full, with more than a fifth completely full.

Lilian Abbo, an infectious-disease specialist from the University of Miami Health System, said, "Miami is now the epicenter of the pandemic."

"What we were seeing in Wuhan six months ago, now we're there," Abbo said.

When DeSantis was asked Monday about his education commissioner, Richard Corcoran, ordering all K-12 schools to open in the fall for in-person classes, DeSantis said, "I'm not going to dictate how everything goes."

"You're going to have a lot of school districts around the state that are going to open up, and that’s going to be it," DeSantis said. "That's been my approach to almost all of this stuff."