Looks like Universal Orlando finally killed off one of its longest-running, least popular shows

After a decade-and-a-half run, one of Central Florida’s most divisive theme park shows is now rumored to have finally been put out of its misery.

Fear Factor Live opened at Universal Orlando in 2005, by which time the television show it was based on was already getting plenty of bad press itself. A year later, the TV show was canceled, but the in-park game show miraculously lasted longer than many popular attractions, outliving even Kongfrontation and Jaws: The Ride.

Fear Factor Live is one of the last remnants of a trend in park shows to feature guests as the primary performers. Similar shows were once common in studio-focused parks; Disney World's Hollywood Studios had park guests singing on stage in American Idol Experience and the Monster Sound Show. Universal Studios Florida saw plenty of its attractions within this genre, including Hercules and Xena: Wizards of the Screen and its predecessor, the Murder, She Wrote Mystery Theatre. One of the best-known attractions of the genre was the much-beloved but rarely crowded Earthquake, which involved multiple pre-shows where park guests partook in on-stage performances.

But Fear Factor Live took the idea to a new level by subjecting guests to previously unimaginable challenges. It allowed park guests to volunteer to be subjected to challenges that included having live animals such as spiders or scorpions crawl over their face, grabbing beanbags out of a tank full of live eels, and seeing who could hang onto a bar suspended two and a half stories in the air while being blasted by industrial-strength fans the longest.

Just like the reality show it is based on, Fear Factor Live got attention for how it treated animals. In one challenge, live bugs were killed via a blender. The insect "milkshakes," which also included a "mystery meat," were then chugged by guests. 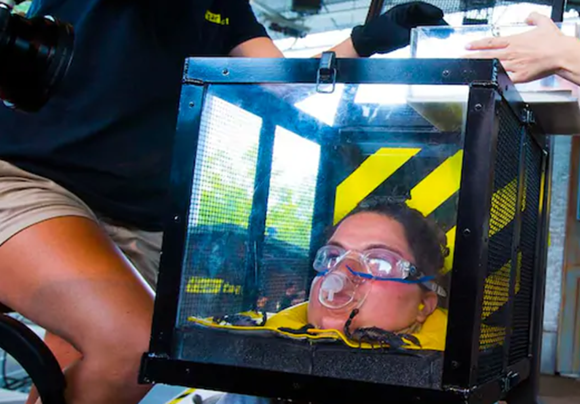 The gross-out tactics used throughout the show have made it a lightning rod – most guests either love it or hate it. It regularly played to dismally small crowds, and on slower days was known to struggle to find contestants for its insane challenges.

For years, rumors of its demise have filled message boards and fan websites. The Ministry of Magic from the Harry Potter films was previously strongly rumored for the space. Within Diagon Alley, a gate blocks a direct path toward the Fear Factor Live stadium. But like the Super Nintendo World that was replaced with Kids Zone, plans for a Ministry of Magic-themed land now seem to have been expanded and moved to Universal Orlando’s upcoming Epic Universe theme park.

A new wave of rumors again points to Fear Factor Live's demise. Multiple sites are now reporting that the show will not return when other shows reopen.

For now, the stadium is being used as one of Universal Studios Florida’s U-Rest areas, where guests can remove their face coverings. The stadium is also used each fall to host one of the Halloween Horror Nights live shows. During this time of year, regular Fear Factor Live shows pause to allow for significant HHN stage alterations.


For now, there are no indications of what might replace the gross-out, crowd-displeasing show, but Universal apparently has no issue with leaving an empty stadium mostly unused. At Islands of Adventure, for example, the Toon Lagoon stadium hasn’t been regularly used since Mat Hoffman's Aggro Circus closed, and that was eight years ago.

Universal has yet to officially confirm that Fear Factor Live isn't returning, but considering it's less popular than a blender full of bugs, it's probably gone for good.