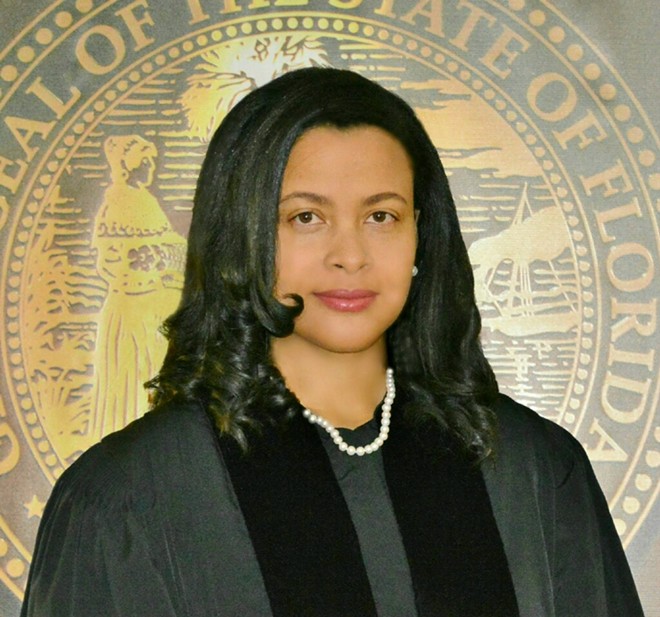 A Democratic state representative on Monday filed a lawsuit challenging one of Gov. Ron DeSantis’ latest appointments to the Florida Supreme Court, arguing that Palm Beach County Circuit Judge Renatha Francis is unqualified for the post.

DeSantis in May announced that he was appointing Francis and Miami attorney John Couriel to replace former justices Barbara Lagoa and Robert Luck, who left the Supreme Court after being named by President Donald Trump to the Atlanta-based 11th U.S. Circuit Court of Appeals.

Couriel has joined the Supreme Court, but Francis is ineligible to serve as a justice until Sept. 24, when she will mark her 10th year as a member of The Florida Bar.

“The plain and unambiguous language of the Florida Constitution requires that an individual satisfy that requirement prior to being eligible for appointment,” Monday’s lawsuit, filed by Rep. Geraldine Thompson, D-Windermere, said.

Francis was born in Jamaica and is slated to become the first non-Cuban person of Caribbean heritage to serve on the Supreme Court, DeSantis said when he announced the appointments on May 26. She also would be the first Black justice since Peggy Quince retired early last year and would be the only woman on the court.

The lawsuit alleges that the Florida Supreme Court Judicial Nominating Commission “exceeded the limits of its authority” by including Francis’ name on a list of nine nominees sent to DeSantis in January.

The 32 initial applicants for the two posts included several black or Caribbean-American applicants, and all but Francis had been members of the Bar for the requisite decade at the time they applied, Thompson’s attorneys wrote in the lawsuit filed at the Supreme Court.

Under the Supreme Court’s rules, the nominating commission cannot recommend appointees to the governor “unless the commission finds that the nominee meets all constitutional and statutory requirements” to serve as a justice.

“There is nothing in the Florida Constitution or the JNC (judicial nominating commission) rules which provide the JNC with authority to nominate an individual for potential appointment to the Supreme Court where that individual may become eligible for that position on some future date,” William Ponall and Lisabeth Fryer, who represent Thompson, wrote.

The lawsuit noted that, under the Florida Constitution, DeSantis was obligated to make the appointments 60 days after the nominating commission certified a slate of nominees on Jan. 23.


"The failure of the JNC to include a single constitutionally qualified candidate is puzzling, given the wealth of experience and pure merit of many of the diverse and constitutionally qualified candidates." tweet this
The JNC “clearly lacked the authority to certify an individual for consideration where that individual could not meet the constitutional requirements to be a justice on the Florida Supreme Court until approximately six months after that mandatory 60-day time period expired,” Thompson’s lawyers argued.

The decision to push back his Supreme Court picks past the initial March 23 deadline appeared to be the first time a governor used a state of emergency to delay the selection of justices, Florida Supreme Court spokesman Craig Waters said at the time.

The petition asked the Supreme Court to issue what is known as a writ of quo warranto “concluding that the JNC exceeded its legal authority by including Judge Francis on the list of certified nominees.”

The lawsuit also asks the court to order the JNC “to immediately provide” DeSantis with a new list of nominees and asks that the JNC “strongly consider including for consideration the six fully qualified African-American candidates who applied for the vacancies in this case.”

DeSantis’ office did not immediately respond to requests for comment Monday evening.

When DeSantis announced Francis’ appointment in May, she was on maternity leave. He cited her leave as the reason for her “ascension to the court in September,” but made no mention that she will not be constitutionally eligible to serve as a justice until then.

Monday’s lawsuit by Thompson, a Black legislator renowned for her re-enactments of historical Black leaders, noted that she “fully supports racial and gender diversity” on the Supreme Court.

“It is deeply disturbing that there are currently no African-American, Caribbean-American, or female members on the Supreme Court. The petitioner believes that diversity is vital to the fair administration of justice, promotes a broader understanding of legal issues, and instills public confidence in the legal system,” her lawyers wrote.

Thompson also accused the JNC of ignoring “the widely recognized interest in diversity on the judiciary” as well as “the fact that there were six fully qualified African-American applicants” for the vacancies.

“The petitioner’s challenge in no way questions whether Judge Francis has the abilities or qualifications to be considered for appointment as a justice on the Florida Supreme Court when she meets all the requirements of the Florida Constitution for that position,” they wrote.