Florida cities are fighting to stop penalties of $5,000 and removal from office, if they pass local gun regulations 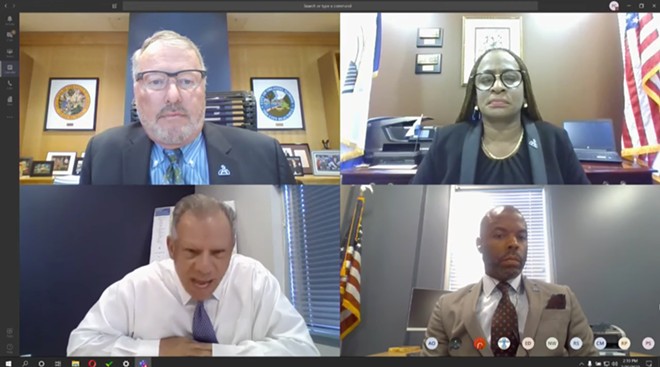 Imposing stiff penalties on city and county officials who approve gun regulations that go beyond state firearms laws came under scrutiny Tuesday, as an appeals court considers a lower-court ruling in lawsuits filed after the 2018 mass shooting at Marjory Stoneman Douglas High School in Broward County.

Dozens of city and county officials filed the lawsuits challenging a 2011 state law that threatens the penalties. The government officials, many from South Florida, said the law had a “chilling effect” on their ability to enact ordinances aimed at reducing gun violence.

Leon County Circuit Judge Charles Dodson last July ruled that, while the Legislature has the authority to prevent local governments from passing gun regulations that are stricter than state laws, local officials cannot be punished for enacting such measures. Lawyers for Attorney General Ashley Moody and Gov. Ron DeSantis asked the 1st District Court of Appeal to overturn the decision.

During arguments in the case Tuesday, Edward Guedes, a lawyer who represents the elected officials, told a three-judge panel of the appellate court that Dodson’s ruling should be upheld, in part because local governments are entitled to “absolute legislative immunity” when acting in their official capacity.

“We are at a very important threshold, that once we cross it, local democracy becomes meaningless,” Guedes said.

“Let’s go back to my hypothetical, where the local government knowingly passes an ordinance in violation of state law, imposes a 60-day potential jail time on a citizen, a citizen is arrested and put in jail under a county ordinance that was clearly preempted. Does the Legislature not have the right to prevent that kind of evil?” he asked.

“Not at the expense of constitutional principles,” Guedes replied.


"This is an intrusion, a dramatic intrusion into fundamental core principles of local democracy." tweet this
Florida since 1987 has had what is known as a “preemption” law that prevents local governments from passing gun regulations that are stricter than state firearms laws. In 2011, lawmakers passed another measure that included a series of steps designed to prevent local governments and officials from violating the 1987 law, including imposing penalties of up to $5,000 against officials and potential removal from office.

The National Rifle Association-backed measure also allowed individuals and groups that successfully challenged local governments over gun regulations to receive damages up to $100,000 and attorney fees.

Dodson found that the 2011 law was unconstitutional, but he did not strike down the underlying 1987 law.

Chief Judge Stephanie Ray questioned Guedes about the difference between officials who mistakenly approve stricter gun ordinances and “knowing and willful” actions targeted by the 2011 law.

Guedes said local officials could “get hauled into court” and asked about their reasons for voting on such measures.

“This is an intrusion, a dramatic intrusion into fundamental core principles of local democracy,” he argued, emphasizing that the gun-related measure is the only Florida law that mandates the punishment of local officials.

The Florida Constitution gives local officials immunity “to protect the process, to protect against the possibility of destroying local democracy,” he argued.

Upholding the law would mean that “those legislative bodies have no power at the whim of the Florida Legislature on whatever subject the Legislature chooses —- today it’s firearms, tomorrow it could be grass height.”

“Isn’t that exactly what the Constitution says, you do operate at the whim of the state Legislature? You call it the whim, but it’s actually a decision by 160 elected members (of the Legislature),” the judge said.

But Guedes said the 2011 law is different.

“We have absolutely no problem, your honor, with the Legislature telling local governments that they’re preempting an area of the law to them. None at all. Where we have our problem is, where there’s a punishment attached to it. This has never happened before in the history of Florida,” he argued.

“We are talking about the fundamental right of self-defense. Maybe the Legislature takes that very seriously,” the judge said.