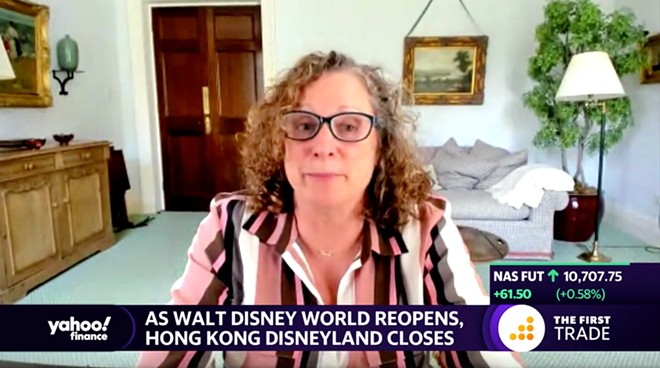 The granddaughter of Walt Disney Company co-founder Roy O. Disney is slamming Disney for its decision to reopen their Florida theme parks amid the nationwide highest-ever rates of COVID-19 infection.

"I don't have a say in the company and I don't know what numbers they're looking at," said Disney on Yahoo Finance's "The First Trade" on Wednesday. "All I know is what everybody else does, that Florida is now recording record new cases and now record new deaths."

The state reported 13,965 new coronavirus cases, and a new record same-day death count on Thursday, with 156 more dead, bringing the total death toll to 4,677. There have now been 315,775 infections statewide.

"So it's strange to me that they would get into this situation by opening up this massive enterprise – for which people fly from everywhere in the world to go," said Disney. "So I am incredibly concerned about the implications of what is going to happen. I can't imagine they're able to protect their employees and all of their customers."

Disney was set to open its Anaheim, California, park on Friday, but delayed the reopening indefinitely, as the virus continues spreading. In Orlando, the Magic Kingdom and Animal Kingdom opened on July 11, and Epcot and Hollywood Studios reopened on Wednesday.

A Disney spokesperson told Fox Business the company has "prioritized the health and safety of our cast members and guests and [is] taking a responsible approach to reopening," using guidance from private and federal health officials.

"These health and safety measures include a mandatory mask policy, temperature screenings, increased cleaning and disinfecting, and capacity restrictions to promote social distancing," said the spokesperson.

Recently, Abigail Disney criticized the company for furloughing its workers, rather than slashing top executive salaries. In April, she called the pay to Disney's then-CEO Bob Iger "insane." According to SEC filings, now executive chair Iger has agreed to take no salary this year, and new CEO Bob Chapek had his salary cut in half, though he still stands to earn millions more in bonus and incentive pay.

Furloughing the park workers likely saved Disney $500 million per month during the shutdown, the Financial Times previously reported. Yahoo Finance reported the average Disney park worker makes $11 per hour. That will jump up to $15 per hour next year, per a union agreement, but there is no hazard pay for "cast members" in the parks now.

Besides reopening the parks, Disney's ESPN Wide World of Sports complex is hosting the truncated NBA season this year, creating a "bubble" within which two players have so far tested positive for COVID-19.

The Orlando parks have canceled all special dining events, meet-and-greets with costumed characters, parades and firework displays. Still, Disney says she fears for the workers.

"I will say that I don't know how a person sleeps at night given what we know to be – and they know perfectly well – to be the condition of their workers and the insecurity they’re living in now," said Disney.