Florida Democrats call on Gov. DeSantis to scale back reopening 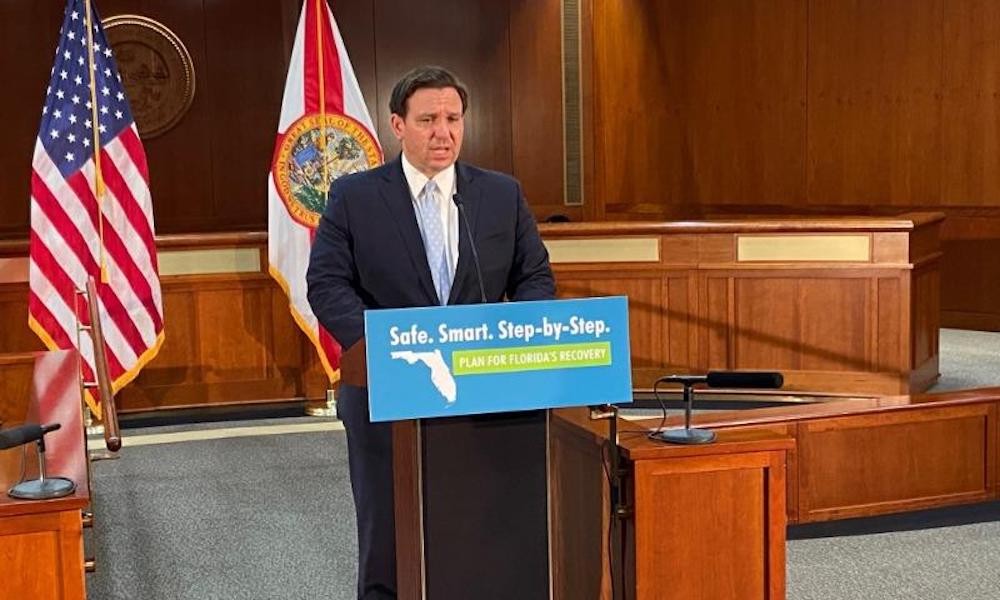 Florida Senate Democrats want to scale back economic-reopening efforts to slow the spread of the coronavirus, as Gov. Ron DeSantis maintains his approach has been taken with an “eye towards what's sustainable.”

In a conference call Wednesday with reporters, Democrats continued to push for a statewide mandatory mask requirement as they offered a “Step Back to Safety” plan.

Sen. Oscar Braynon, D-Miami Gardens, warned that without a cautious rollback of the economic reopening, the state will need another broader closure to stop the spread of the virus.

The plan, in part, seeks to revert retail and restaurant maximum occupancy from 50 percent allowed in most of the state to 25 percent, which was the level under an initial phase of reopening in May. Also, they said bars should remain shuttered.

Instead of forcing schools to reopen campuses, Democrats said the state should ensure all students have computers and internet access. In addition, they said each county should delay reopening classrooms until the local coronavirus test-positivity rate is 5 percent or less for 14 consecutive days.


Instead of forcing schools to reopen campuses, Democrats said the state should ensure all students have computers and internet access. tweet this
The Democrats’ requests came as the state Department of Health on Wednesday reported 10,181 new cases of the coronavirus, bringing Florida to 301,810 cases since March. The virus also claimed 112 more lives, bringing the death toll in the state to 4,521.

Over the past seven days, the state has recorded an average of 92 deaths, nearly triple the 31 daily fatalities a month ago as DeSantis pushed most of the state into the second phase of his economic reopening.

Asked if there might be a need for changes, DeSantis told reporters later Wednesday at the Capitol that most people are following health guidelines.

“When we were going through this in March and April, a lot of folks were focused on what is being restricted or shut down or all that,” DeSantis said. “I think if you look at it, most of the behavior was changing before a lot of that was happening. And I think what we've seen recently, as the cases have become more of a center-stage issue again, is we're seeing changes in mobility data. We're seeing people do the social distancing. We're seeing folks who are vulnerable making the extra effort. And I think, ultimately, that is what's going to do it for us.”

On Tuesday, DeSantis said the reopening approach has been done with an “eye towards what's sustainable” for businesses that started to close in mid-March and were mostly shut down through April as unemployment spiked.

“We did what we had to do. But I think from a public's perspective, at some point I think that they lose interest in kind of still being in this fight,” DeSantis said during a roundtable discussion with a group of South Florida mayors. “And so, as we're doing this, calibrating it in a way that allows us to have society function, businesses operate as best we can with the protections, you know, I've just thought that's a more sustainable approach. And I think you see that in the different parts of the country and different things that have been tried.”

Meanwhile, Florida cruised past the $10 billion mark this week in the amount of unemployment benefits paid out since mid-March.

More than 3 million jobless applications have been filed in the state, with about 2.88 million considered “unique,” according to the state Department of Economic Opportunity. The peak of first-time claims was in mid-April.

Of the unique claims, more than 2.62 million had been processed as of Tuesday, with 1.7 million claimants paid. The state had distributed $10.13 billion in state and federal benefits, of which $2.36 billion was state money.

DeSantis has expressed optimism that Florida will see “positive” job numbers on Friday, when a June unemployment report is released.

However, several members of the group of South Florida mayors who met with DeSantis on Tuesday said many businesses have learned during the pandemic to operate from outside their offices and with fewer people.

“We're going to have people that are not going to go back to work,” said Doral Mayor Juan Carlos “JC” Bermudez. “This is not a short-term issue. And I know that that gets talked a lot about, but it's a much more complex issue than maybe we've recognized.”

Some of the mayors also expressed concerns that any economic revival will be slowed without a unified message from the federal, state and local levels regarding social responsibility for “aggressively non-compliant” people.

Miami Beach Mayor Dan Gelber told DeSantis that the medium- and long-term impacts to the cruise and aviation industries could seriously impact the economy of South Florida.

“I'm mayor of a city that wasn't really built to socially distance itself,” Gelber said. “We do the opposite. We want people to come and dance and hug and organize themselves and gather. So, it's been very challenging.”

Florida’s tourism-reliant economy saw its unemployment rate go from 13.8 percent in April to 14.5 percent in May, even while businesses started reopening.