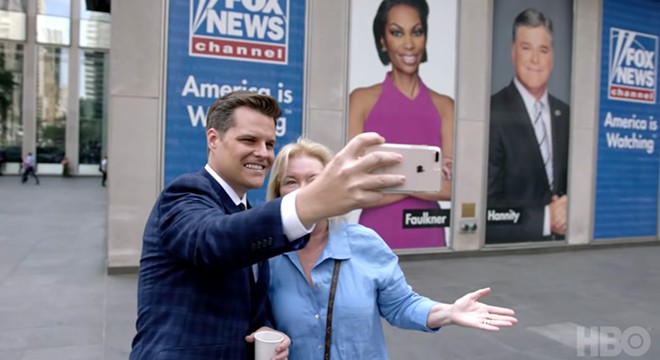 Florida Rep. Matt Gaetz plays a pivotal role in HBO’s new documentary The Swamp, which premieres on the platform Aug. 4.

The documentary looks to peek behind the curtain of Washington politics, exposing the path to power in Congress and the capacity of greed.

The two filmmakers, Daniel DiMauro and Morgan Pehme, best known for Get Me Roger Stone, follow Gaetz along with congressman Thomas Massie and Ken Buck “over the course of a pivotal year in politics, demonstrating the breadth and grip of a system that rewards money-raising above all else, plaguing Congress on both sides of the aisle,” according to a press release.

Colossal events in recent political history run through the documentary, including the Mueller hearing and President Donald Trump’s impeachment trial. The HBO crews were even there when Gaetz was “milkshaked” back in June of 2019.


The HBO crews were even there when Gaetz was 'milkshaked' back in June of 2019. tweet this
More recently Gaetz, made headlines when he declared that the removal of Confederate statues is “cultural genocide.”

"This isn't about slavery or fascism or even race," he said in a Fox News appearance. "There is an attempted cultural genocide going on in America right now, and it calls for patriots to stand up and say, 'This is a great country. It is worthy of our pride and our defense."

But so far, it’s been a turbulent and on brand year for Gaetz. In February, he filed an ethics complaint against Nancy Pelosi for ripping paper. Then in early March, the congressman made light of the coronavirus pandemic by wearing a full gas mask on the House floor. The following April, Gaetz then filed a bill that would deport “illegal aliens” during a national emergency involving a pandemic. And, just last month, he tweeted that he wanted to “hunt antifa.”