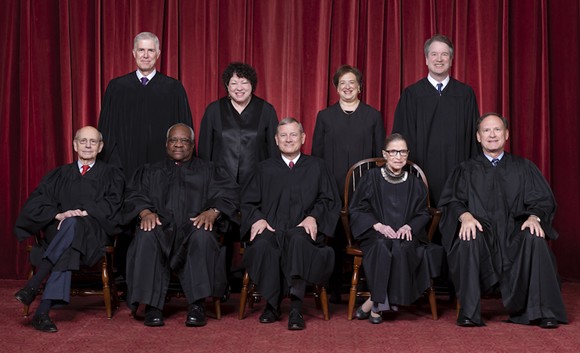 Hundreds of thousands of Florida felons won’t be able to cast ballots in next month’s primary elections, after the U.S. Supreme Court on Thursday refused to vacate an appellate court’s order in a closely watched legal battle over voting rights.

Plaintiffs in the voting-rights case had asked the Supreme Court to lift a stay issued by the 11th U.S. Circuit Court of Appeals in a challenge to a 2019 state law requiring felons to pay “legal financial obligations” —- fees, fines, costs and restitution —- to be eligible to vote.

The stay, issued at the request of Gov. Ron DeSantis, put on hold a ruling by U.S. District Judge Robert Hinkle that would have cleared the way for felons to vote in the August primaries. Thursday’s decision by the Supreme Court means the stay will remain in place until the Atlanta-based appeals court decides the underlying issues in the case.

Voting-rights groups are challenging the 2019 state law, arguing, in part, that linking voting rights and finances amounts to an unconstitutional “poll tax.” The law, approved by Republican legislators and signed by DeSantis, was aimed at carrying out a 2018 constitutional amendment that restored voting rights to felons “upon completion of all terms of sentence, including parole or probation.”

But DeSantis appealed and requested the stay. The Atlanta-based appeals court has scheduled oral arguments on Aug. 18, the same day as the state’s primary elections. In an unusual move, the 11th Circuit also agreed to DeSantis’ request for what is known as an “en banc,” or full court, initial review of the case. Three-judge panels nearly always conduct initial reviews of appeals.

In a brief filed with the U.S. Supreme Court this week, DeSantis’ lawyers argued that allowing Hinkle’s ruling to take effect would sow disarray.

The federal judge “not only fundamentally altered the upcoming election by changing the composition of the Florida electorate without any warrant in the Constitution,” but also “undermined” the Legislature’s authority, the state’s lawyers wrote.

The majority in Thursday’s U.S. Supreme Court decision did not release a written opinion, a practice that is common.

But Justice Sonia Sotomayor, in a dissent joined by Justices Ruth Bader Ginsburg and Elena Kagan, wrote that the majority’s order “prevents thousands of otherwise eligible voters from participating in Florida’s primary election simply because they are poor.”

Sotomayor also pointed to a U.S. Supreme Court decision in a case known as Purcell v. Gonzalez establishing that election-related court orders can result in voter confusion and have a chilling effect on voter turnout. As elections draw close, “that risk is increased,” the justices held in the 2006 ruling.

In their brief this week, lawyers for DeSantis told the Supreme Court that the state would be “irreparably harmed” if Hinkle’s “patently erroneous injunction is reinstated, enabling hundreds of thousands of ineligible voters to take part in the upcoming elections, one of which is only a month away.”

“Because the parties’ rights and the legal framework had been well established, it was error for the 11th Circuit to reverse course in an unexplained stay order right before an election,” Sotomayor wrote.

The justice also scolded the Supreme Court for recent decisions in other elections-related cases.

“This court’s inaction continues a trend of condoning disfranchisement,” she wrote. “Ironically, this court has wielded Purcell as a reason to forbid courts to make voting safer during a pandemic, overriding two federal courts because any safety-related changes supposedly came too close to election day.”

“Florida’s voters spoke loud and clear when nearly two-thirds of them supported rights restoration at the ballot box in 2018. The Supreme Court stood by as the Eleventh Circuit prevented hundreds of thousands of otherwise eligible voters from participating in Florida’s primary election simply because they can’t afford to pay fines and fees,” Smith, whose organization represents some of the plaintiffs, said in a prepared statement.

The decision “is an unfortunate, but not insurmountable, setback in the ongoing struggle to achieve true democracy in our country,” Southern Poverty Law Center Deputy Legal Director Nancy Abudu, who also represents some of the plaintiffs, said in a statement.

It remains unclear whether the court battle will be resolved in time for the November general election. Appellate courts often take months before issuing decisions.

Thursday’s Supreme Court ruling also came as lawyers for the plaintiffs seek to recuse three 11th Circuit judges from participating in the case.

Two of the targeted 11th Circuit judges, Barbara Lagoa and Robert Luck, were picked by DeSantis to serve on the Florida Supreme Court shortly after he took office in 2019. The former justices later left the state court after being appointed by President Donald Trump to the federal appeals court.

In a brief filed with the appellate court Wednesday, plaintiffs argued that Lagoa and Luck should not be allowed to participate in the case because they were involved in the litigation while they served on the Florida Supreme Court.

In written testimony provided to the U.S. Senate prior to their confirmations to the federal court, Lagoa and Luck said “they would recuse themselves from any case involving the Florida Supreme Court while they were justices or in which they played any role —- commitments that are triggered here,” lawyers for the Campaign Legal Center wrote in a motion joined by other plaintiffs in the voting-rights case.

The code of conduct governing federal judges also “requires disqualification when judges participated, in a prior judicial position, concerning the litigation,” the lawyers added.